Its easy to write some Gambas code to provide basic control of a 3D printer.

My original idea was a stupid one; I wanted to be able to download G-code files to the printers SD card, then instruct it to print. The reason why this is stupid will become clear.

The starting point is to create a new Gambas GUI project, include the component gb.Net, and add a SerialPort object.

Then set the serial properties:-

Then add a nice big TextArea and write some code to read the port;

The next step is to add a routine to send data;

With the printer connected via a suitable cable and having given the Linux user suitable permissions (http://captainbodgit.blogspot.com/2021/05/3d-printing-printer-to-linux-computer.html) running the program now will cause the printer to reset and send data. 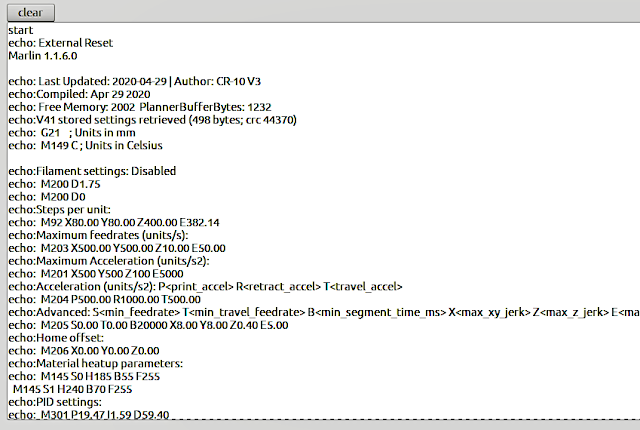 Add a few constants to the Gambas code;

Then maybe add a few switches to enable the transmission of commands;

You can even write data to new files on the SD card. Here are a few more constants;

Note that file names must be in the 8.3 format.

However, the problem is this; sliced files (g-code files) are large. The serial link only operates at a Baud rate of 115,200. So it takes a long time to download even the simplest of objects.