I've just finished the Radiotherapy phase of my treatment.

So its a good time to look back at how things played out.

My treatment plan includes 6 sessions of chemotherapy followed by 37 sessions of radiotherapy. The last chemo session was at the end of January. I was given a couple of months to recover before starting radiotherapy. I described the treatment method in this earlier post.

I think my basic assessment is that; although chemo turned out to not be as bad as I expected, radiotherapy had more of an impact on me than I was expecting. After all, radiotherapy is just laying under a machine for a few minutes while invisible rays gently microwave your prostate. Surely you don't feel a thing?

However, the first problem is that your body is under attack, so you get tired, fatigued even.

The second problem is the fall-out; although the prostate gets the full dose of radiation, the bladder and bowel also gets some of the signal. This can lead to the 5 dreaded and perilous consequences of pelvic radiotherapy;

1. Bladder control: this takes you right back to one of the signs of prostate cancer. It becomes almost impossible to fully empty your bladder. It feels like your bladder is never less than half-full. So you have less capacity and therefore have to urinate more frequently day & night, and there is generally much more urgency to do so.

2. Diarrhea: this becomes more frequent as you progress through the course of sessions.

4. Wind: once again, a consequence of irradiation of the bowel.

5. The most feared and dreaded of all: is thinking that the feeling down below is due to 4, when it turns out to be either 2 or 3

The effects of radiotherapy build up as you go through the treatment. Its generally the last couple of weeks that are the worse, and in fact, the side effects can peak a week or two after treatment has stopped.

When I mentioned diarrhea to a member of the oncology team, she produced a box of little magic sachets...

Somewhat ironically, Normacol is normally used to treat constipation. Each sachet feels like a packet of garden seeds, but the granules mostly contain sterculia, which is a vegetable gum from the karaya tree. 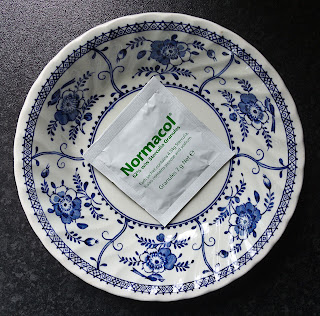 The idea seems to be that this is a safe way of adding fibre to your diet, in a way that does not further aggravate your bowel. You are not supposed to chew the granules or let them get wet until you are ready to swallow them as they swell up.

So I've been taking them in the morning, sprinkled over porridge, and in the evening with yogurt. They seem to do the trick!

It seems to be the oncology team's policy not to try to get you to change your diet during radiotherapy, other than banning you from drinking tea and coffee. It is thought that if the patient radically changes their diet, it may do more harm than good.

But I specifically asked for guidance so that I could decide for myself whether to include/exclude certain foods. I'm so glad I did.

Just by making a few tweaks to my diet I was able to improve my situation mid-way through radiotherapy.

So I replaced Weetabix with porridge, stopped eating pineapple, and peeled the skins of apples. I also made sure carrots were well cooked, stopped eating garden peas, sweetcorn and all kinds of beans.

Following on from Radiotherapy, and as a result of my DEXA scan, there is some concern about my bone density. I have been diagnosed with osteopenia, which sits between normal and osteoporosis. So I may have to go on medication for that.

But otherwise, I just have blood tests every 3 or 6 months, and continue to have Zoladex jabs every 3 months for the next year and a bit!

I have also signed up for acupuncture sessions in an attempt to alleviate the 'hot flushes' caused by Zoladex.

so what's this about a bell?

Its an idea that came over from American 20 odd years ago. You ring a bell at the end of your radiotherapy treatment and its supposed to make you feel better.

the end of a major chapter in my adventure

The last time I spoke to John, a friend who was dying from lung cancer, he told me he was treating the whole episode as another adventure. This was a guy who had probably had more adventure in his life than most of us.

So when I was diagnosed with prostate cancer, I decided to follow John's example.

I'm a coward, so I resisted the temptation to go-on-line and see what was going to happen to me. When speaking to friends who had been through chemo, I asked them not to tell me any horror stories ...turns out that they didn't have any horror stories to tell.

I approached each blood test, examination, stage of treatment, and review meeting with an open mind. That way I didn't end up worrying what was coming next, as this would have been like going through the whole thing twice.

I took a close interest in each procedure and was fascinated by all the high-tech machines they used along the way.

I was fortunate (I believe) to have had the most common male cancer in the UK, as a lot is known from trials about the most effective treatment plans for individual sufferers, and the best way to deliver it while minimising any side-effects.

I was also fortunate that the year-of-covid did not slow down or otherwise impact on my treatment. And one benefit of lock-down was that there was less pressure to meet family and friends. Even catching a common cold (as I did back in March) is more troublesome when your immune system has been clobbered.

So the bottom line is that the treatment that I received for prostate cancer was not too bad.

A couple of months back, I did come to the conclusion that the body must have dozens of subtle ways of tormenting you.

Just to give you 3 examples;

...all part of the adventure I guess!

a footnote on radical surgery

During my visits to St. Luke's for radiotherapy, I met a guy who had had radical surgery 5 years ago. In other words, they had removed his prostate. However, the prostate cancer had returned, so he was just starting radiotherapy.

Out of curiosity we asked a member of the team how this was possible, as its generally thought that surgery means; no-prostate, no-prostate-cancer.

However, when it is removed the surgeon has to leave the "prostate bed" (or a reasonable margin) otherwise the patient would have a hole in the side of his bowel.

It only takes one cancer cell to be left behind in the prostate bed for the cancer to develop and re-appear.

I'm rather glad that I took the chemo-radiotherapy route!

My Prostate Cancer: what next?

Click on the "Health" tab at the top of the page to find earlier posts on my experience of prostate cancer.