Now that I've been using my new Nokia 3310 for a few weeks, I have a better idea of its strengths and weaknesses.


Its a good basic phone, but it has a few bad & ugly aspects to its design.


So here is a more detailed review than the one posted at the beginning of September.


As previously mentioned, the battery consumption is really low. When the phone arrived, I just fitted the battery, and the display indicated it was already about two thirds charged, so I didn't bother to re-charge it.

By day 11 the battery icon was probably showing 10-20%. I can't be precise because there is no battery % reading, just a rectangular graphic with a black portion to represent state of charge/discharge. So anyway I decided to fully charge it, so I wouldn't have to worry about it during the coming week.

Its now day 10 since the full recharge, and I guess the battery graphic is showing about 30%. In addition to my low communications usage (probably 4 or 5 texts & 2 or 3 calls per day on average, and the "data" option is turned off) I did take approximately 15-20 photos over the weekend.

So lets assume I would only need to recharge 2 or 3 times per month. That's great, I can live with that.


My hearing is no longer what it was (...in the pre-heavy metal phase of my life) but I find the audio nice and clear, both on transmit and receive (I tested this by swapping phones with a mate).

The phone has a nice in-the-hand feel about it. Its certainly not too large for my small hands, and the key operation is positive. I haven't dropped it (yet) so I guess its not too slippery, and the display is plenty bright enough.

...OK, its only 2Mpixel, so you can't blow the images up without noticing the low resolution. But for snap-shots at the kind of size I post on Facebook and on this blog, its fine.

and now the bad & ugly


The #1 negative has to be the alpha-numeric keys. The keys are a light grey colour, while the characters are a slightly darker light grey. 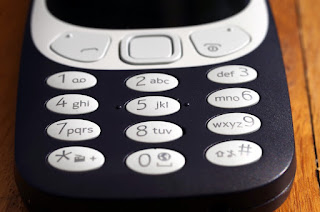 This lack of contrast makes it difficult to see the characters on the keys in low light conditions when the keyboard back lighting is off, although its fine once you wake-up the phone and the keyboard lights up.

However (...and this is the bad bit) in strong lighting conditions (e.g. sunshine) you cannot see the key characters whether the back light is on or off!

The keys really needed to be a dark colour with light grey text, but I guess that would not have looked so good in the publicity photos! It looks like "style" has won out over "usability".

The 2nd problem is keyboard lock. Being able to reliably stop your phone from randomly calling people, while it rattles around in your pocket or handbag, is a fundamental requirement of any mobile phone. This phone can be unlocked by pressing the large key on the left. Yes, the one with the protruding nipple that is sure to be the first key that comes into contact with something and gives your phone permission to run-a-muck!

How did the 12 year olds in the design team get this one so wrong?

This is still not great for two reasons; 1) Glance consumes more power (OK I've got plenty to spare), 2) the chances of the two large nipple buttons being pressed is still too high for my liking. They should have stuck with the method used on old Nokia phones, which required at least two of the small keyboard keys to be pressed, one after the other in the correct sequence, within a small time-frame.


...there seem to be a few issues with the phone menu/selection/information layout. So in no particular order;


I like this simple phone, and hope there will be a 4G equivalent available by the time that I have to stop using this one.  Although 4G is supposed to be more power hungry than 2G, as long as any new simple phone doesn't include a large touch screen display and a complicated operating system, a good battery life should still be achievable.

It is a shame that some aspects of the design of the Nokia 3310 are just plain stupid, but life (and cheap consumer electronics) is like that sometimes. Although this phone carries the Nokia name, it does not appear that the wisdom and experience from the past has been carried forward into the design of this phone, at least not the user interface.