The [not so] EasyCap for Linux

An EasyCap is a USB device that connects a composite video source (like an "analogue" cctv camera) to a computer.


The name "EasyCap" is not really a product name, because there are so many companies making copies of the original device. In fact one company (ClimaxDigital) got so fed up with the number of bad copies in circulation, that it change its branding to EzCAP, and more recently, dropped the name completely.


So you don't really know what you are getting when you order one of these. Its only when you connect it to your Linux computer and type "lsusb" that you discover what is inside.

But last week, when I noticed Amazon were selling a 4 channel EasyCap for only £7.38, I took a gamble and ordered one.

I already have two ClimaxDigital EzCAP modules which I've been using successfully on Linux for a few years to capture bird box video. However, I like the idea of a 4 channel unit as this may simplify my existing setup.

Once connected to my laptop, lsusb revealed this module uses the "Somagic" chip. After a bit of searching on the net, I found a bunch of crazy guys are working on software for this family of devices.

A bit of background

As I'm using Lubuntu, I initially installed the deb packages for this device from the repository. But these packages do not support the newer driver included with this module. So having picked up some more information along the way, I uninstalled the debs and started again.

The basic approach is to download the current source files, then substitute some of the more recent files that are compatible with the newer driver. Once this is done, we can make a version compatible with this 4 channel device.

Using a Windows computer (...yeah, I know...) insert the disk that came with the EasyCap. In the Drivers folder, run the setup.exe to unpack the drivers. Now you should be able to locate and copy the driver from the XP folder: SmiUsbGrabber3F.sys

The "3F" indicates the version. Versions earlier than 3E are covered by the deb packages, but for 3F we need more recent source files.

Open the Lubuntu file manager (pcmanfm) and select Tools > Open current folder as root
Now change permissions on the somagic-extract-firmware folder (either make yourself the owner or give anyone full permission.... Hey! I don't care)

Now open a terminal in this folder (or cd into it) and run:-
make
...then
sudo make install

Still in terminal, cd to wherever you left the driver (SmiUsbGrabber3F.sys) then:-
sudo somagic-extract-firmware SmiUsbGrabber3F.sys
...and you should get a response like this:-
Firmware written to /lib/firmware/somagic_firmware.bin  {file size = 6.5kB}

Now look for the newly created "user" directory (e.g. /home/{username}/user) and change permissions as before.

Get new somagic-int file from here:-
http://code.google.com/p/easycap-somagic-linux/source/browse/user/somagic-init.c?r=306a7981a53dfbd62bb579090cfcd81fefb928a6
..and overwrite the existing file which will be in the "user" directory.

Get new somagic-capture file:-
http://code.google.com/p/easycap-somagic-linux/source/browse/user/somagic-capture.c?r=ef1195b61fa36dc7f93bde82c3f4fadde5157574
..and overwrite the existing file which will also be in the "user" directory.

In terminal, cd to the "user" directory, then:-
make
sudo make install

Now connect the EasyCap device to your computer USB port, and in terminal:-
sudo somagic-init
...and now:-
lsusb
...which should show your device as 1c88:003f 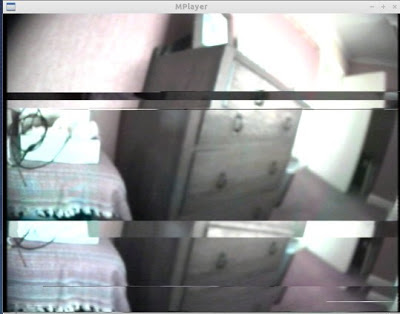 I've tried this on a laptop and a desktop (both running Lubuntu 12.10) and used 2 different cameras. Changes to the command line (including video standards PAL & NTSC, and also iso-transfers ) so far have not shown any improvement.

Just to make sure there is not a problem with the device, I've run this on Windows 7:- 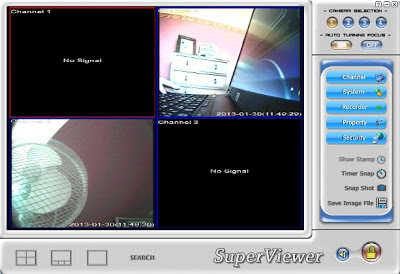 
In the comments below, a couple of people have taken the time to suggest solutions.

It looks like the key is the --sync=1 option.

Now that the Raspberry Pi 2 has been released (which can be run on Debian or Ubuntu) I plan to buy one, dust off both my Somagic and ClimaxDigital modules, and give it a go...
...I've just got a couple of other projects ahead of this in the queue!
Posted by SteveDee at 13:02