My Hantek USB oscilloscope was supplied with Windows software, but how can I run it on Linux?


There are a couple of FOSS options for Linux including OpenHantek and Sigrok.

The Hantek 6022BE is a nice, low cost, 20MHz bandwidth scope module that runs via USB connection on a computer. I've seen plenty of reviews where the reviewer condemns this device as "rubbish". These are typically by people that already have proper free-standing oscilloscopes costing hundreds of pounds.

The strength of the Hantek is that it is cheap, but still very useful when used as a visual diagnostic aid on low voltage electronics projects. Naturally it is not as good as a proper, free standing oscilloscope. But many hobbyists either can't afford a full oscilloscope, or can't justify the cost for a piece of test equipment that may only be used once or twice a year.

Since the Hantek is powered from a computers USB ports (it uses 2 sockets in order to meet the power requirements) I certainly would not try to use it on any equipment containing high voltages. The BNC input connectors are labelled "35V max". Most of my projects run well below 24Volts.

So rubbish, it is not!


These are my notes from installing OpenHantek on Lubuntu.

Install required stuff via a terminal:-

Download OpenHantek from Git to get the latest master copy:  https://github.com/OpenHantek/openhantek

Navigate into  .../build  folder and hit F4, to open a terminal at this location, then type in terminal:-

Now connect your Hantek scope via the two USB cables to your computer and type in a terminal;

You should see the "Select Device" dialog. If the firmware does not load within a few seconds, cancel and then type:-

I had to navigate to: /lib/udev/rules.d/60-hantek.rules and change ownership from root to the current user.

Note: the output of command  lsusb

- before OpenHantek firmware is loaded: ID 04b4:6022 Cypress Semiconductor Corp


I created a Hantek.desktop launcher file with the following contents:-

Note: obviously you need to enter a path to a real icon location (I copied this icon into pixmaps).


Save this file in: /usr/share/applications for access from your menu, or save to desktop to launch from there.


The first problem was that the display appeared to be too high for my screen. If I grab-and-drag the window, only the width changed. After a lot of fiddling around I realised that the control panels were dockable. I dragged each one to the left hand side of the screen and they magically became tabbed. 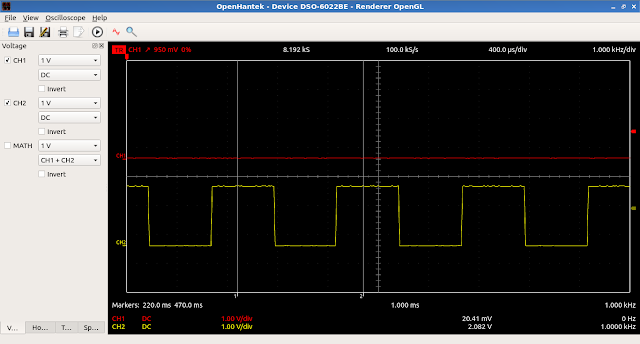 When I recently installed a newer version on another laptop, I didn't seem to have layout problems. So maybe this has been fixed, or my second laptop has a more favourable screen size.

There was also a bug with the Timebase and Samplerate settings, but this has now been fixed.

On first use, I connected a probe to the Hantek 1kHz test point, set the Trigger Mode to Hard-/Software and then pressed the Run arrow.

To move a channel trace up or down, just click and drag on either CH1 or CH2 on the Y axis. Trigger level is set in a similar way via the coloured arrows on the right of the trace.

My main problem when running on my old ASUS laptop, is that OpenHantek seems to run the processor pretty hard, and the cpu temperature rises to a dangerously high temperature of 95'C.

However, it seems to run OK on my newer Entroware laptop, with the temperature running less than 60'C and cpu loaded to about 65%. I can hear the cpu fan throttle up after a while, so I will need to keep an eye on this.

I can't imagine that OpenHantek runs very happily on a Raspberry Pi, but if I get time, I'll give it a go. 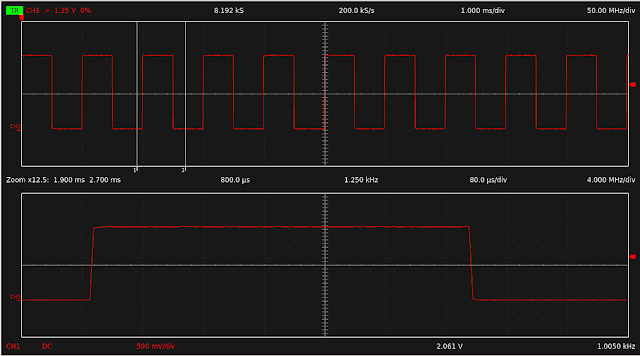 Select Zoom from the View menu, then drag the vertical markers (1 & 2) to set the zoom range. You can drag the red marker (shown in the top left corner in the above illustration) to move through the sample buffer.


With Spectrum enabled, I fed the scope with a 20kHz sine wave.

The Frequencybase was set to 10kHz/div, so the 20kHz fundamental appears 2 divisions from left. The minor pulses are harmonics and other spurious signals.

The OpenHantek project is no longer maintained, but the code is stable and still works absolutely fine.

However, you may be interested in a forked version of this project called OpenHantek 6022:-

...which has a few more features as is currently an active project.