Over the Easter weekend of 1964, the M.V. Caroline dropped anchor a few miles off the Essex coast and started broadcasting popular music.


A certain 12 year old, super-glued his ear to the family wireless, and within 3 weeks was joined by 7 million other listeners. Within a year, there were over 20 million of us.

a little bit of history


Caroline was not the first offshore radio station, but it was the first to arrive off the British coast and start broadcasting, and the last to stop transmitting from international waters around the British Isles.

In my view Radio Caroline's original owner, Irishman Ronan O'Rahilly, shouldn't be seen as the 'father of British offshore radio', as that crown should have gone to Allan Crawford and his project, Radio Atlanta.


Crawford wrote the manual on British Offshore radio.
His biggest mistake was to trust the O'Rahillys.

The Australian music producer Allan Crawford had been openly talking to people (including Ronan) about his plans for an offshore radio ship. It was Allan that realised that new musical talent could not get "air-time" in Britain due to the BBC monopoly, very limited programming for popular music, and their policy of only using established artists from the major record labels.

The much repeated story (even by me) that Ronan started Caroline because he could not get his band's music played, turns out to be just an urban myth (he never managed the group "Georgie Fame & the Blue Flames").

In 1960 the UK government set up the Pilkington Committee to review the future of broadcasting. No surprise then that in 1962 this bunch of middle aged, middle class men (plus 1 women) concluded in their report that "the British public did not want commercial radio". However, a slightly confusing comment also advised the BBC to set up Local Radio stations in order to prevent the introduction of commercial radio! Which suggests that this committee wanted to block commercial broadcasting & maintain the BBC monopoly, rather than consider the views of the general public.


Ronan flew Allan over to Ireland to meet his rich father and to see the disused port at Greenore, which belonged to the O'Rahillys. Once again Allan's detailed written plans were shared, including a legal assessment that such an enterprise could operate outside of the UK's jurisdiction.

This meeting eventually led to Allan mooring his ship there, and during the winter 1963/64 both his and Ronan's newly acquired ship were secretly worked on to make them ready for use by the spring of 1964. It appears that both project teams sabotaged the others efforts, but this destruction was much more damaging to Allan's Mi Amigo, which eventually left Greenore during a storm, well ahead of the m.v. Caroline.

However, Radio Atlanta did not start broadcasting until almost 7 weeks after Radio Caroline.

After a few months of operation by both ships, the two projects merged. The m.v. Caroline sailed back around the coast and took up position off the Isle of Man, and became Radio Caroline North, while the m.v. Mi Amigo became Radio Caroline South. This gave Caroline good national coverage via their two transmitters.

Radio Caroline continued transmitting offshore (under different ownership) for periods during the 1960s, 70s, 80s and 90s. In 1983 the station restarted on the ex-Ross trawler, the m.v. Ross Revenge, until shipwrecked on the Goodwin Sands in 1991.


Both the ship and station have survived.

Caroline has been an internet radio station for the last few years, but now has a Community Radio license to transmit on 648kHz from Orfordness. It also uses Manx Radio to transmit as Caroline North on 1368kHz.

The last surviving ship (the Ross Revenge) is a registered hulk, which means it cannot sail under its own power, so has to be towed to a location and then anchored.


Our visit to the Ross Revenge started at midday as 10 enthusiastic visitors climbed aboard the Razorbill 3, the small boat that ferried us out into the River Blackwater. It took about 20 minutes to cover the 4 miles to where the Ross Revenge was at anchor.

Once aboard, we were taken to the mess-room for tea, coffee and an informal chat with 4 or 5 Caroline volunteers; 4 DJs plus a lady administrator who organises the trips, runs the shop, makes the tea, and probably does 101 other things. At least 3 of the DJs in the mess had seen active service when Caroline was still transmitting from the North Sea back in the 1970s & 1980s.

We were then split into two groups and moved on for a tour of the ship...


...including visiting the transmitter room, the generators, the engine room... 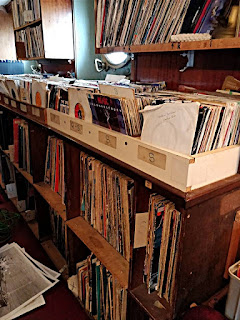 According to our guide, the transmitters and the engine are still functional. But as I may have mentioned already, the ship is a registered hulk and must therefore be towed if it needs moving. I don't think the rudder mechanism was ever fixed after the Goodwin Sands incident.

The aerial mast is a £35,000 fake, and not as impressive as the original 91 metre monster. But the Ross Revenge would not look like an offshore radio station without this very generously donated accessory. When the ship was originally being fitted out for use as Radio Caroline, cement was flooded into the hull to counter-balance the mast and help stabilise the ship. Don't quote me, but I thought our guide said that they used 600 tons of cement.

After about an hour and a half, we were encouraged to visit the shop, checkout the merchandise, pay the balance for our trip, and assemble in the mess room, ready to board the Razorbill 3 and return to Mersea Island. 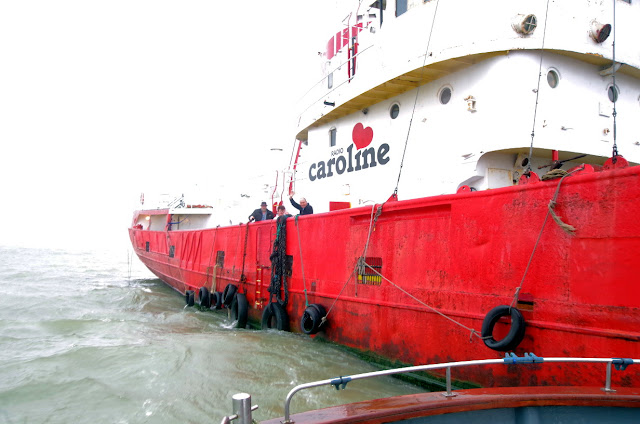 I guess we were onboard the Ross for at least 90 minutes and onboard the Razorbill 3 for 20 minutes each way. So I think £25 for this trip is very good value, especially if you have an interest in Offshore Radio or ocean going fishing trawlers or you just like old ships!

The public carpark near the hammerhead pier (where the tour starts) is very small. I should imagine parking is a bit of a problem on busy sunny days, so I'd recommend you arrive really early, as you may have to park in a side road some distance away.

I can recommend the Oyster Bar for lunch, but you may have to book a few days in advance: http://www.westmerseaoysterbar.co.uk/

To book a Ross Revenge boat trip, go to: http://www.radiocaroline.co.uk/#boat_trips_background_info.html