Lens adapters that allow you to connect different format lenses to camera bodies can be very handy.


But they ideally need to be the correct length to maintain focus range.


I decided to try to hack an adapter that is just 1mm or so too short.

As described in this earlier post, I now have two lens adapters that allow me to use my old Pentax K lenses on my Olympus m4/3rds camera. Both have an effective length of 25mm, which is just over 1mm short of the ideal length of 26.21mm.

In use, this deficiency reduces the useful focus mechanical adjustment range, although it is normally still possible to focus successfully within the range of the lens. It also means that zoom lenses will not stay in focus over the full zoom range.


I decided to try using washers under the lens mounting face plate. This plate is easy to remove by slackening the 4 fixing screws and being careful not to lose the pin and spring mechanism which locks the lens in place. 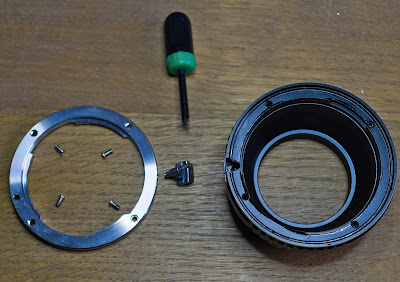 Although I had some washers that were about 1mm thick, I decided to start by using a smaller set with a thickness closer to 0.5mm. The diameter of these washers is far too large to fit in the narrow width of the face plate, so I used my Dremel with a grinder attachment to reduce the washer width. 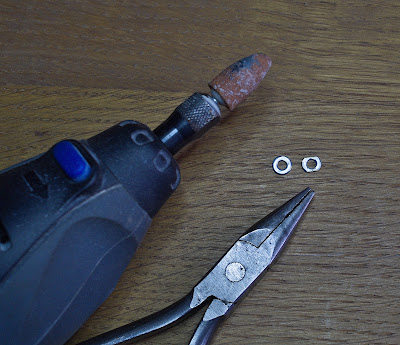 Its a fiddly job getting the washers in position, so I used clear Vaseline to hold them in place and a small kebab stick to align each one over the associated hole.


Once reassembled, I was surprised to find the focus distance scale on my Pentax 28mm lens was almost perfectly aligned. Likewise my Pentax 80-200mm zoom, which also stayed in focus when zooming between 80 and 200.

I seem to have lost my vernier calipers, so I measured the effective length of both adapters as best I could.


When my new vernier calipers arrive I'll update these dimensions as its difficult to be accurate using a steel rule graduated in 0.5mm steps. But I'd guesstimate that the K&F adapter length has been increased by about 0.8mm.

I wondered if the increase may be partly due to the washers not sitting flat under the face plate, so I did a double check by simply standing the Gobe on 4 washers...

...but the length looks very similar.


It should go without saying that if you attempt to modify these or any other lens adapters, you are on your own. Don't come crying to me if something bad happens ...I'm not your mummy!

In attempting to hack these adapters, I have created at least three potential problems;
To check for light leaks, I set ISO to maximum, set shutter speed for longest exposure and fitted the lens cap. Then I used a Manfroto bright LED light to check for leaks.


Although light is clearly getting into my modified adapter, it doesn't appear to be a problem for me under most conditions;
I might use some kind of sealer/sealant between the adapter body and the face plate to block out the light. But for the moment, this hacked adapter works fine for me. 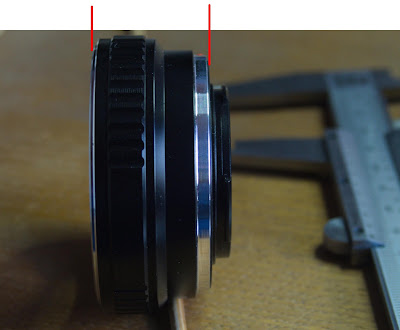 I now have another sample that Gobe kindly sent me. I'm referencing my original adapter as Gobe #1 and this new sample as Gobe #2. My K&F Concept adapter has been modified by adding 4 washers which I now know are 0.7mm thick.

Effective lengths:-
...and just to compare the focus setting for my Vivitar zoom length when correctly focused on a distant object (infinity);


So these Gobe & K&F Concept adapters "as sold" are only 0.7mm too short, which doesn't sound like much, but it sure makes a difference.