Although we got rid of the majority of our Pentax gear over a year ago, I still have a few lenses.


Since these are just gathering dust, I thought I'd try to put them to use...

Three of the lenses in question are Pentax branded, while the 4th is a Vivitar, and I doubt that they have any real value. They are 40 years old and I use to use them with my wonderful Pentax K1000 35mm film camera.


A lens adapter does not contain any lenses, its just a tube. In its simplest form it doesn't have to do much except;
So clearly, you have to have the correct adapter for both the 'host' camera and the 'guest' lens mount type, in my case; Olympus u4/3rds to Pentax K. 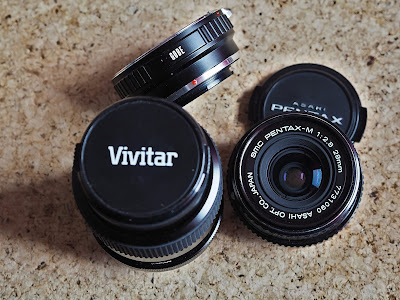 In use, simple adapters like the Gobe do not connect the camera electronics to the lens electronics. This is fine in my case because my old lenses are purely mechanical. Consequently, there is no way the camera can control the lens focus or aperture ring. Therefore focusing and setting the aperture is your problem.

I actually prefer using my camera in fully manual mode. But one of the issues with many modern cameras is that the focus ring on the lens just keeps turning. I much prefer having a scale, a limited arc to turn the ring through, and no 'acceleration' when the ring is turned quickly.

So don't buy a simple lens adapter unless you are happy to manually set exposure (aperture) and adjust the focus. With the electric display & view finder on my Olympus, you get a nice bright view when around the correct settings (one thing you may not get with an optical view finder).

Focus "peaking" does not work on my M10 with manual lenses. In use, I focus using the magnifier button to make the display about x3 larger. I set exposure using a combination of the light meter display and native cunning.

One other point concerns focal length. Although photographers talk a lot about the focal length of their lenses (e.g. "I've got a 460mm Yanker", "Oh, well I've got a 600mm Chopperdoodah") its really the 'field of view' (FoV) that ultimately matters ...how much you can see 'framed' by your camera with a given lens.

Since the FoV is a function of focal length and image sensor size, it turns out that any lens you were used to using on your old 35mm SLR will have a narrower FoV when used on a modern u4/3rds camera. But the focal length of a lens does not change when you simply move it from a dSLR to u4/3rds. Its the image sensor size that is different, and it is this which results in a change in FoV.


My new adapter cost £20 and is a Gobe branded device. The very first thing I did with it was to fit the 28mm Pentax lens to my Olympus OM-D E-M10 and rush outside to take a picture. 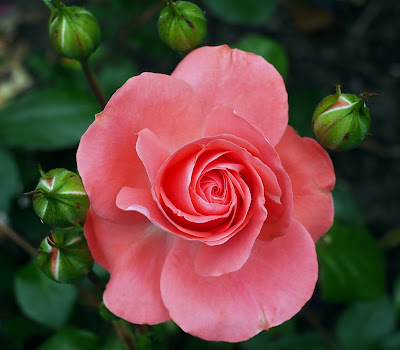 The result was quite pleasing, so I did a crop of this first image... 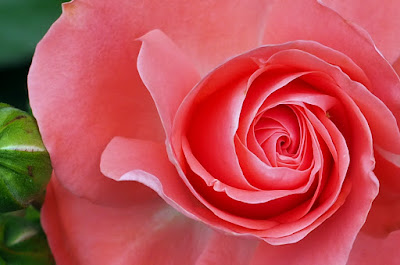 ...and it still looks great.

I also managed to get some reasonable pictures of the famous white storks on the Knepp Estate using my Pentax 80-200mm lens... 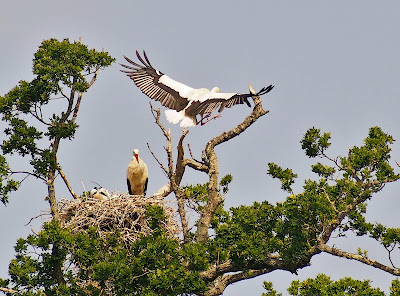 to infinity and beyond


I was only trying to use my zoom lens at full reach (200mm) but I soon realised that the range/distance scale was quite a bit 'out' when correctly focused, and that it focused on distant objects well before the 'infinity' (end of travel) position.

I found various comments on the net about similar adapters with distance scale/focus problems. So my next step was to do some testing.

By focusing the 28mm Pentax lens on various targets and then measuring the camera sensor to target distance, I found the following:-

scale setting : actual focal length
The worsening of this focus problem as the focal distance increases, makes it more difficult to focus at a distance (e.g. focusing becomes more 'touchy' for objects that are further away). Depending upon the lens, the useful focus adjustment may drop to as much as 2/3 (e.g. from 90deg rotation, possibly down to 60deg).

And checks on my two zoom lenses showed another problem; the lens will no longer maintain focus as you zoom from minimum to maximum range.This would be an even bigger problem if I were keen on taking video.

Clearly this adapter does not position the lens correctly with respect to the camera's image sensor. I did some simple (if rather crude) tests with the 28mm Pentax lens detached from the Gobe adapter. With a book positioned 1 metre from the camera, I set the lens to the 1m mark and held it in front of the camera. The book came into focus with the lens about 1 - 1.5mm in front of the adapter.

My conclusion is that the adapter is about 1mm too short. I see other people on the net have fitted thin shims of copper or aluminium kitchen foil to correct small errors in various adapters. But the error in my Gobe is an awful lot to make up. The typical thickness of kitchen foil is just 16micro-metres, so I'd need over 60 layers to get close to 1mm.

I have now emailed Gobe for their advice/comment.....

A few days later I managed to find some data on the net:-


The difference between the two = 26.21mm, therefore the ideal lens adapter should have an effective length (i.e. between mounting surfaces) of 26.21mm.

Some people on the net say "...well its better that the adapter is a little short rather than being too long, and not being able to focus on infinity". I say it would be better if it was nearer the required size. I don't believe it is difficult to produce adapters with an effective length of 26mm to a tolerance of (say) +/-0.2mm.

The thermal expansion of aluminium is such that a 20deg change in temperature (say from 20'C to 40'C) would only result in an increase in length of just over 11um.


Apart from this adapter being too short, it is otherwise well made. The device is metallic, quite heavy, and mates well with both camera and lens.

In order to minimise reflections from within the adapter, all internal surfaces have (what looks like) a black anodised finish. 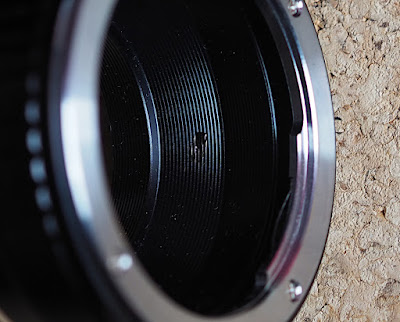 This photo shows that a few minor marks have been touched up, either using paint or more likely a permanent marker pen. I think this is perfectly acceptable for a 20 quid adapter.

However, the focus problem is a negative. It really shouldn't be difficult getting the length of the device right ...should it?

in for a penny, in for a pound


I ordered a second adapter from K&F Concept (£25.95) to see if theirs were nearer the golden length of 26.21mm. ...I know, I'm an idiot, especially as the K&F device appears to have been made in the same workshop as the Gobe! The two devices look practically identical, and Gobe & K&F are both German companies.

The only difference between the two adapters are the brand makings. The K&F adapter does come with a plastic box and a lens cleaning cloth (which you don't need as the adapter does not contain any glass). So the Gobe lens adapter is clearly better value for money.


I'm planning to keep these adapters and hack one, or possibly both, to see if I can improve them. So there may be a future post covering this.

Edit: Here is a follow-up post on hacking this adapter.