It was shaping up nicely for an interesting bird box season.


Several birds tried our camera nest box for size and some even laid a few eggs.


But with only a week to go before the chicks were due to fledge, it all went tits up!

As described in my post covering April, we seemed all set for another mixed species bird box. By the 1st May we had a blue tit couple looking after 4 great tit eggs and 5 blue tit eggs. Its interesting that the female blue tit stopped laying eggs when she had 9 to look after. Nine is the average number for blue tits in our garden, so she must be 'programmed' to lay what she can cope with, rather than lay a fixed number herself. 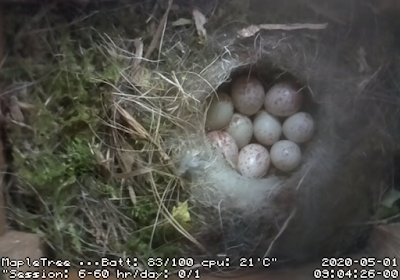 Incubation proceeded as normal, with the first chicks hatching on the 11th May.

Its always difficult to count chicks in the nest, by we certainly saw 8 out of 9, with no visible evidence of any eggs left to hatch.

The female re-enforced the nest with lambs wool (which we had provided) creating a raised lip to the nest cup. During the females vigorous nest cleaning, a chick was accidentally ejected. Unfortunately neither of the parents seemed to recognise that this chick was in trouble or even needed feeding. It was unable to scale the wall around the nest cup, so after a few hours it just perished.

This happened to a second chick, and after 2 hours outside the nest cup we thought sure it was a gonner. But then the male gave it a couple of pecks which made it move, and during a feeding frenzy it seemed to almost accidentally drop back into the nest cup.


By the 2nd week of feeding we noticed this visitor on some of the box recordings...


Initially I thought it was just a curious great tit, but soon realised it was a dangerous woodpecker. There was very little I could do to stop the woodpecker from cutting a great hole in the box, if that was its intention. But I managed to stop it from looking in the nest and freaking out the female by reshaping some holes on a piece of chicken wire. 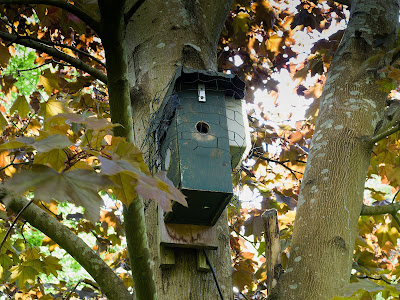 Although this worked, there was clearly still something on the outside of the box that was bothering the parents. This was apparent by the way they would occasionally enter the box and turn to face the entrance, frozen for several seconds before eventually feeding the chicks. 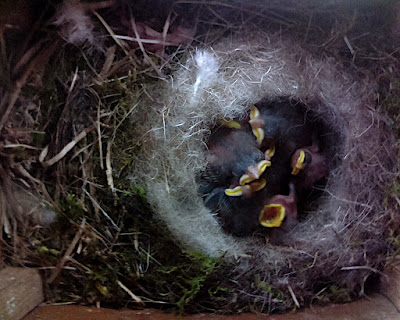 Then around the 23rd May I noticed the feeding rate was dropping. It had been well over 350 per day, but was down to about 200. Some of the recordings indicated that the chicks were not always that keen to feed.

I saw an example of the male on auto-pilot; he came into the box with food, couldn't get anyone to take it, so left the box for 3 or 4 seconds and came back and tried again. This pantomime was repeated 5 or 6 times on one occasion until a chick took the food.

Chicks started to die, and at 5:30am on 25th May the parents came in to find the remaining chicks had died overnight. 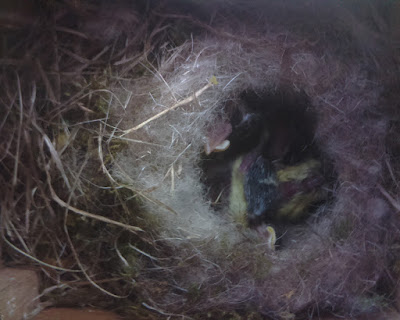 Very quickly the bodies of these chicks will dry out and decay, and there will be very little evidence left by the end of this year. If birds decide to use this nest for BirdBox2021 the female will root around, throwing out anything she doesn't like the looks of.

I suspect the chicks may have suffered some kind of illness. It follows a pattern we have seen before where everything appears to be going well, then just a few days before they should be leaving the nest, they start to die.

However, being harassed by predators does not help the adults do a proper job.


Unfortunately we have created an unnatural environment by both feeding and providing nesting sites within the same general area (i.e. our garden). This attracts predators such as cats, woodpeckers, magpies, Jays, sparrowhawks & so on, dramatically changing the predator to prey ratio. It may make more sense to stop feeding birds from the beginning of April until early June.


So our bird box season is drawing to an end, except that we have a very old box on a broken fence post that got thrown into a hedge when the fence was replaced a few years ago. I made this box about 20 years ago, so I think it must leak like a sieve. 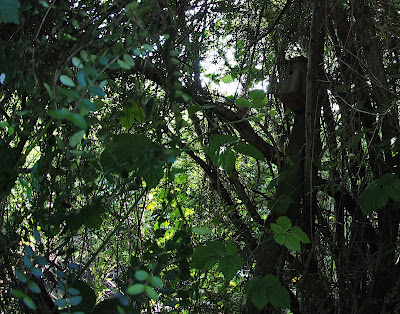 But two blue tits are quietly feeding their chicks out of sight and should be ready to leave the nest any day now. Another family of blue tits are about to emerge from our neighbours box, easily visible from where I'm sitting. And we already have a noisy new family of great tits feeding in the trees & bushes around our feeder ...life goes on.
Posted by SteveDee at 15:01