I have just ditched my old broadband filter module for an ADSL filtered faceplate, as part of recent building work at home.


It was not delivered with any instructions, so I had to incorporate it into my new wiring scheme using (I dare say) non-standard wiring.

During the last couple of months we have taken up most of the ground floor timbers, done some stuff with concrete, and then replaced many boards, joists and sleepers with new timber as we put our house back together.

So it made sense to wire in a few more power points, move the speaker in/outlets, and run some CAT5 cable. We now have 2 ethernet points in each of the 2 rooms, one for each or our 2 televisions.

I've also replaced the old phone extension cable (which used to meander around the edge of the room under a carpet) with a length of CAT5 which goes straight across the room (under the floor) to the router under the stairs.


Most homes that have a service provided by BT will have a BT box like this one... 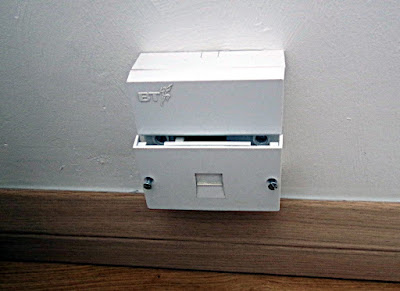 This box has 3 main parts. You, the customer, are permitted to remove the front panel and wire your own equipment via the IDC (insulation displacement connector). However, BT get very upset if you try to move the box or otherwise tamper with the incoming cable.

Whether tampering with BT's wiring is actually illegal (as some claim) or simply in contravention of their terms and conditions, I'm not sure.


The construction of the BT box is such that you probably won't want to do anything beyond removing the outer section.

If you have a phone/internet problem and want to eliminate your house wiring, simply remove this outer plate and plug your equipment directly into "the test socket".


This unit contains a filter to remove the broadband signals from the phone interface. It is suitable for ADSL and VDSL applications.

I couldn't resist opening the plate to take a look at the filter...


It looks like a well designed assembly with a collection of inductors, transformers, resistors and capacitors. Its purpose is to filter broadband signals out for the phone, and match the line impedance to the phone, without degrading the higher frequency broadband signals. 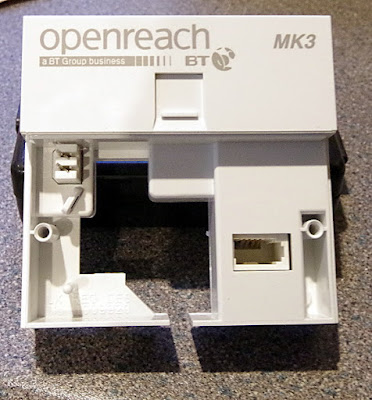 This new filter plate attaches into the existing box. The unfiltered output (for my ASDL modem) is taken from the IDC (on the left in the picture above) marked A and B.

The connection points for the phone are taken from the IDC on the original front assembly. 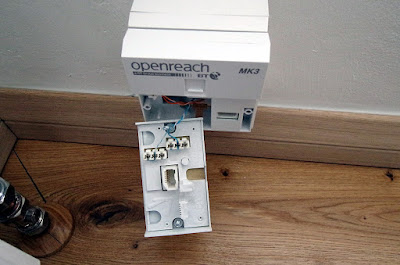 When fully screwed back together with the original 3 assemblies plus filtered faceplate, the box is very chunky, and sticks out from the wall by 60mm! 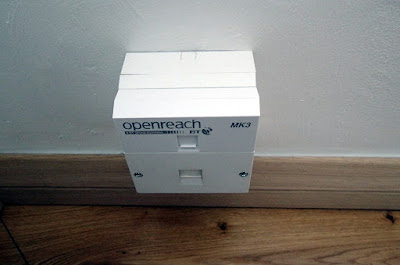 ...where the CAT5 cable connects to modular sockets in a small distribution panel.


This panel contains 4 modular sockets mounted on a twin-gang box. 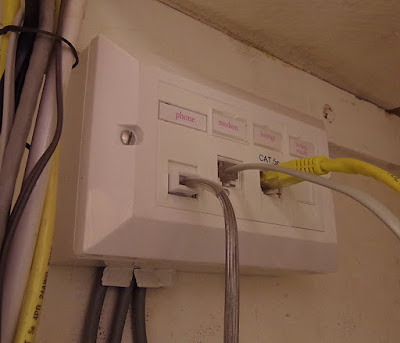 It simply terminates the CAT5 cables from the phone box and 2 ethernet room sockets. The router connects to this panel using standard network (RJ45) and modem (RJ11) cables. The wireless phone unit connects via a separate UK phone cable.


There seems to be two conflicting bits of advice when it comes to locating your modem/router/wireless box.

For best results with your modem, conventional wisdom says it should be right where your service enters your house.

For best wifi coverage, the wireless access point usually needs to be located somewhere near the middle of your home, often biased nearer the back to give coverage to all or part of your garden.


Maybe these considerations are telling us to buy separate boxes; a free-standing modem, and a combined wireless ap with router.

As our service is supplied via copper cable, an extra 5m of CAT5 is not going to make any real difference. So our router remains in its cosy location under the stairs.


The BT Openreach MK3 claims to improve performance, but I think this rather depends upon the condition of your previous installation (i.e. whether you had a problem that needed fixing!).

Our service is delivered via copper cable. I'm not sure if it terminates in a green street box or runs straight back to the sub-exchange. Either way there is probably less than 150m of street cable.

The 2 data sets below are for the old filter and the new filter plate. In both cases the internal cable is CAT5.


The data rates seem to vary day-by-day, but of more interest are the SNR Margin (higher is better) and Line Attenuation (lower is better).

As you can see, in my case the difference is negligible. But the motivation to move the filter to the incoming phone box was primarily to tidy the wiring and remove any potential problems.

I have been monitoring my broadband service for over 12 months using a Raspberry Pi server and the ThinkBroadBand service (i.e. I time the operation of downloading a 10MB file every 2 hours). My monitor has shown me that a few incremental changes have improved things my end. And I've also seen external issues appear and disappear from time to time that have presumably been fixed by Openreach engineers.

Currently my monitor indicates download speeds in the range 18 - 20Mbps.
Posted by SteveDee at 09:15