Gimp (a.k.a. The Gimp) is an image editor, very popular with Linux users and possibly a handful of Windows users.


Caught between the devil and the deep blue sea, this post focuses on Scheme.

No, its not Kung Fu


Script support in Gimp can be via Python-Fu (for Python) or Script-Fu for a lightweight implementation of Scheme: TinyScheme.

Automating tasks using Python-Fu creates Gimp plugins, whereas Script-Fu creates Gimp scripts. As far as I know you can achieve the same results with scripts or plugins.

Back in the 2000's I found I was resizing photos quite a bit in order to upload them to a simple website. I usually took a large image and reduced it twice; once as the main display photo, and again, even smaller as a thumbnail.


I discovered I could automate this in Gimp by creating a script, saving it to a file with a .scm extension, and placing the file in the Gimp "scripts" folder (e.g. /home/steve/.gimp-2.8/scripts). When Gimp is started/restarted it will pick up and register the new script.

This is my early script, saved in a file called web-images.scm:-

See what I mean about brackets? I find Scheme scripts easier to read if spread over many lines with plenty of indentation and white space.

My requirements have changed over time, and I no longer require thumbnails. Usually I just shortlist a bunch of photos by copying them into a folder. Then I reduce them prior to uploading to the web (my internet upload speed is only about 1Mb/s).


So I decided to re-visit my earlier script and create a new one which would batch resize a bunch of photos.

When running Gimp from the Linux command line, you don't even need to open the gui. So my batch photo resize will run from a command line like this:-


...where -i means: run without user interface
-b means: batch mode
scale-batch is the name of my script
.jpg is the file pattern (run script on all jpeg files)
gimp-quit is the procedure to close Gimp

Here is the "scale-batch" script in a file called scale-batch.scm:-

Once again, this script finds the shortest side of the current image (height or width) and scales it to 800 pixels. It also sets the jpeg image quality to 75%. So I typically end up with an image file size of about 500k.

You may notice that "string-append..." appears twice as part of the find save process. This is because the filename parameter appears twice for many of the Script-Fu procedures (filename & raw-filename) which can be confusing.

To run this script in Linux I navigate to the folder containing the images in file manager (pcmanfm) then hit F4 to open terminal at this folder. Initially I then ran the command:-

...but we need to remember that a .jpg file is not the same as a .JPG in Linux, and both extensions may be in use. There is an easy fix, just modify the command line to:-

The result is that a scaled copy of each jpeg file (with either a .jpg or .JPG extension) is added to the same folder with "_s" added to the name.


Obviously it is a bit tricky running the gimp command in terminal for a given directory. If you are using a file manager that supports script launching such as Nautilus, you may be able to write a simple script to run the Gimp command line via the right-click menu. This would be a good solution as you could navigate to the folder containing the images, then right-click to resize.


I've chosen to write a simple Gambas program to run this script. All I have used is a form with a DirectoryView, a Button control and a label. 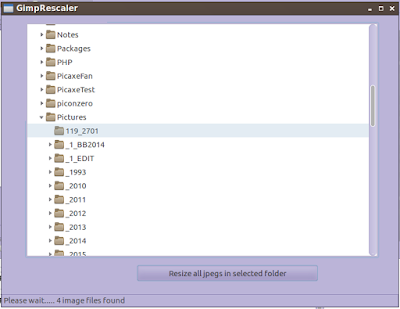 
If you search the net you will find a number of ready-made Gimp scripts and plugins which will resize your images. The ones that I have tried batch resize using a percentage. This is fine if all of your source images are a similar size.

One of the most popular plugins is David's Batch Processor which is available as an rpm. For Debian/Buntu users, just down load, unzip and then copy the dbp executable to your plugin folder (e.g. /home/steve/.giml-2.8/plug-ins).
Posted by SteveDee at 18:41