The Entroware Triton: my new box

My old ASUS x401A  laptop has served me well for the last 4+ years but all good things must come to an end.


The screen flicker/blanking just got too annoying, so I had to dust off my wallet and part with some cash.


So how does my shiny new Triton compare with the old ASUS?

Buying hardware for Linux has always been a bit of a blind date, especially when buying printers. Computers and laptops are not quite so risky these days, but you often end up with some special function keys that don't do what the icon says they should do. With my old ASUS the touchPad enable/disable key was a problem, as was the touchPad mapping.


Entroware is yet another British company that sell computers, but what makes them special is that their laptop and desktop computers are aimed at Linux users. They have been supplying equipment since 2004 and started to specialise in Ubuntu computers 3 years ago. Entroware's computers can be supplied with Ubuntu, Mate or no OS, but either way you can be sure that the hardware is Linux compatible.

I think my computing needs are fairly modest. I'm not a gamer, I program a bit, I edit lots of photos and do a little bit of work with video, but not hi-resolution stuff. Given that my ASUS was a light-duty laptop, I decided to go for the most modest laptop in the Entroware range, the Triton.

I ordered extra RAM (upgrading from 4GB to 8GB) because I thought this might help with image & video editing. I don't need a DVD drive and I already have the solid state drive from my ASUS, so I went with the default 500GB hard drive as I was planning to take it out anyway.

I settled on Mate as an OS so I could test the laptop and be happy that is was working properly. I figure that if the laptop has to be returned for any reason, I can simply put the 500GB drive back in, retest and return if necessary.


Entroware seem happy for its customers to open the case to access the HDD and RAM.

I hate opening laptops. Plastic snap-together cases appear to be designed for easy assembly, but can be difficult to open without breaking plastic. With the Triton I removed the battery, turned the laptop over and removed all 10 screws from the base. There are 2 long screws at the rear corners, and all others are the same size bar one, which is marked M2X5L. So I made sure I noted where each size screw came from as I took them out.

I carefully prised the two halves of the case apart starting at the rear where the battery locates to the case. The plastic outline of the lower case almost surrounds the two audio jack sockets, so this is the last point to detach, and the first place to re-attach/re-align when the case goes back.


The HDD is removed by lifting the left end slightly, then pulling out from the connector. The clear plastic insulator must be removed and fitted to the replacement drive.


With my SSD installed and the laptop reassembled I booted Lubuntu to check all was well.

This laptop is much slower to boot than my old Asus. I think the BIOS (or whatever the equivalent is) is a major factor.

Booting with Ubuntu Mate on a 500GB hard drive took about 45s from pressing the ON button to reaching the login dialog.
Booting with Lubuntu on an SSD takes about 27s.

This earlier post shows the speed improvements between HDD and SSD on my ASUS. But basically, I'm used to boot times of just 15s.

It may be possible to reduce the BIOS time on the Triton, but I have not looked at this.


As I didn't request a CD/DVD drive, Entroware have fitted a kind of DVD cage rather than a simple blanking plate. This can be removed by unscrewing the M2X5L screw mentioned above. 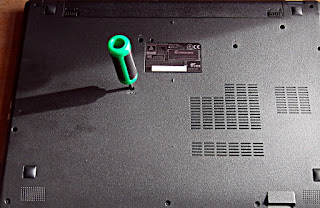 The cage can then be gently prized out from the case... 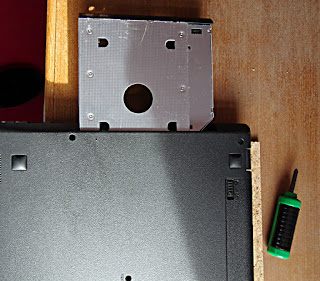 Now the interesting thing about this cage is that you can fit an HDD to it. As I just wanted to test this, I quickly lined the metal cage with Post-It Notes to ensure that the drive's circuit board could not come in contact with anything metallic... 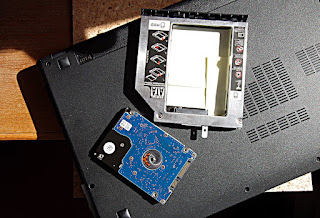 When re-booted, Lubuntu was happy to display the file system and contents for my second drive. That's handy!

However, I then took it out again. I don't need a second drive at the moment, and I'd rather have longer battery life than a second drive.


My ASUS is a small, light laptop. The Triton is larger and a touch heavier, but the weight has been kept down by using a very small battery.


Although the Triton battery looks puny alongside the ASUS battery, I seem to be getting pretty good run-time between recharge. Its too early to say how well this battery will hold up (that reminds me, I must look for a source of replacements) but I've been writing this post for the last 2 hours and the charge has dropped from 100% to 60% and the monitor suggests it could go on for another 3 hours.


The one-piece touch pad on my ASUS is hideous. The Triton has a conventional fixed pad with 2 keys.   Wonderful!   Don't ask me anything complicated about the pad features. I can make the screen scroll up and down with one finger on the right side, or two fingers anywhere else. Thats about as daring as I get.

I like the style and general feel of the keys on the keyboard. However, you do get the occasional chrunchy feeling when you press a key. (Just imagine a small piece of McVities digestive biscuit trapped under the key). From my time repairing laptops, I'd say its that funny little 2-piece plastic structure that joins the key-cap to the board. The roughness will either wear away, or it will break!


I have no idea what Entroware are talking about!

In the UK, consumers are protected by the "Consumer Rights Act 2015" which assumes that any defects noticed during the first 30 days of ownership were there from day 1.

Obviously this does not apply to perishable goods (...hey wait, maybe the display is made from organic leds?)

where is it made?


The Triton is made in Taiwan by Clevo Co who supply hardware to many companies across the world (e.g. configurators like Entroware) to re-brand.


Well in my opinion it is a nice laptop. From what I have seen of its innards, I think it is well made.

It is light and cool on the thighs. I like the gun-metal coloured plastic case, the touch pad works great and the keyboard keys have a nice feel (except when they crunch). I don't need the extra numeric keys, but I guess I wont even notice them after a few days.

It has a nice matte display which is clear, bright and free from distracting reflections (why are shiny reflective screens so popular?).

It is fairly accessible (e.g. access to RAM and disk drive) although I still prefer the old laptops with little plastic doors that you could access by just removing a screw (ahh! the HP Compaq). However, Entroware seem to expect Linux users to want to gain access, which is the right attitude.

It has 5GHz wifi as well as 2.4GHz. I think this is absolutely essential because the 2.4GHz band is so stuffed with traffic.

It has all the appropriate connectors (e.g. 4 USB, audio, HDMI & so on) but I don't like the SD card slot. In common with many laptops, SD cards are plugged into the front of the laptop case and are very exposed. My ASUS has a side slot where the SD card is flush with the case once plugged in. Much, much better.

I would like the laptop to boot quicker, but maybe I can use the extra time to reflect on why I'm turning the damn thing on, when I should be out in the garden, mowing the lawn!