Ether: a tale of two blockchains

The price of Ether (ETH) has rocketed this year and is currently 23 27 times greater than 6 months ago.


For anyone that bought ether last year, this is very good news indeed.


But there are two reasons to be cheerful for anyone that has held onto their ether for at least the last 11 months.


Ether value has risen sharply for a number of reasons. Looking at this global cryptocurrency chart, it is clear that there is more money sloshing around in strange virtual currencies than ever before.


Ethereum has had a big boost due to the formation of the EEA (Enterprise Ethereum Alliance). As mentioned in a previous post, the EEA consists of a group of major companies with a common interest in developing applications that utilise the features of the Ethereum blockchain. Since my earlier post, many more companies have joined the EEA.


a word on the Blockchain


A blockchain is a kind of internet journal that can be used to record data. It does not just exist in one place, there are thousands of copies distributed across many internet connected servers around the world.

If one copy of the blockchain is corrupted or deleted, it does not matter, because the blockchain data supported by the majority is deemed to be the correct "version". When a blockchain is updated, all copies are updated. A blockchain is described as immutable because it maintains all data, including a full history of transactions.

A blockchain could also be described in programming speak as an object, as it contains methods as well as data. So when the time comes to upgrade the blockchain software, the whole blockchain is replaced and must synchronise with existing data from the previous version. The new updated blockchain contains the same data as its predecessor.

Following such an update, the previous version of a blockchain is simply abandoned, like an old Cornish tin mine. But its immutable, so its still out there!

When an application like myEtherWallet generates an ether wallet, it returns a public key or address on the Ethereum blockchain.

The address is in the form of a ridiculously large hexadecimal number.

why are you telling me this?


Well, remember I said that blockchains are immutable? During last summer (2016) there was a hack on Ethereum which resulted in funds belonging to DAO being stolen. A decision was taken to abandon the existing version of the blockchain, roll-back to recover the lost funds, and then issue a new blockchain.

Some people were very unhappy about this. So instead of the old blockchain being abandoned, a sizable minority decided to keep it going. Somewhat surprisingly, this blockchain is still active and is known as EtherClassic (ETC) while the official ether is just known as Ether (ETH).

Now the interesting bit; if you bought ether before the blockchain was "forked" back in July 2016, you have an address that works on both blockchains. Or to put it another way, you own both ETH and ETC. 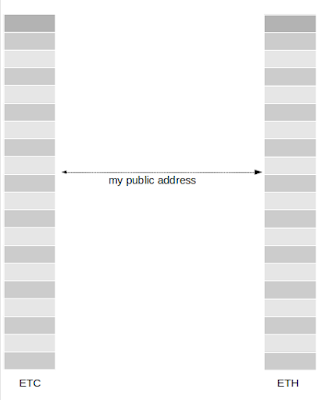 So while it is true that the old ether (ETC) has a relatively low value, ETC has also made striking gains over the last 3 months.

To check your ETH just type in your public key here: https://etherscan.io/


To check your ETC just type in the same public key here: https://etherhub.io/home

That's it. You're in the money!

Note: you can use the BlockChain category tab at the top of my blog page to view all related posts.