There has been quite a bit of discussion in the press this year about the vast amount of personal data being mined by social media companies like Facebook.


Diaspora is an open source, distributed, social media site with the aim of addressing the balance.


So what does Diaspora have to offer, and how can a competitor to Facebook expect to win over its user-base?

The number of Facebook users continues to rise, but there is also increasing concern about the amount of data that they now apparently hold on each one of us. This information may be used to target individual users by not only advertisers, but also political parties.

Why would anyone bother to sift through your Facebook data and compile information on you?

According to Janet Vertesi (assistant professor of sociology at Princeton University) the average person's marketing data is worth 10 cents; a pregnant woman's data skyrockets to $1.50.


Janet and her family tried to hide her pregnancy from the internet by running a private email server, operating a "baby-news" black-out on Facebook, and only buying child related items using Amazon gift vouchers purchased in cash.

But of course its not only your direct posts and actions that matter. Information is also being drawn from the posts and actions of your friends. This is particularly useful in determining where you sit on the political spectrum, as we tend to stick with friends that have similar social and political views.

Sam Jeffers and Louis Knight-Webb recently started a project called "Who Targets Me" to monitor the advertising strategies used by political parties in this weeks UK General Election. They have even produced a browser plug-in to help people monitor their personal stats (see https://whotargets.me/ ).

There is also a project called Share Lab which is attempting to un-pick and map connections between social media and individuals activities on line. Specifically they have Facebook under the microscope.


About a week ago I came across Diaspora. The name relates to both the free software that is managed by the Diaspora Foundation, and the social network created by the servers that run it. Its primary aim is to address concerns over privacy.

Servers running the Diaspora software are called pods (a.k.a. nodes) and users simply create an account on one of these pods. There are currently over 300 pods and you are free to select any one of them to create your user account. Before selecting a pod you should take a look at pod statistics here.

After considering Uptime, Active Users, Services Offered and Location I decided to use diasp.eu, so my address is SteveDee@diasp.eu


a quick look at the interface 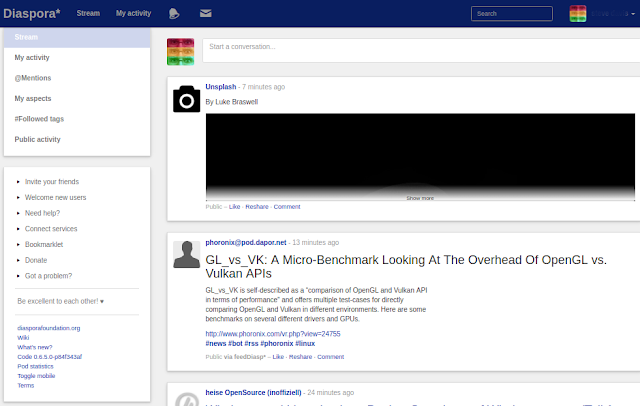 #Followed tags; you select a number of tags based upon what you would like to see in your Stream, e.g. #linux, #raspberry-pi, #blockchain

Stream; your Stream basically shows all public posts containing your selected #tags and posts by people you are sharing with.

Public Activity; show everything that is posted publicly to Diaspora.

Aspects; think of this as aspects of you (e.g. family you, working you, public you). If you post to your Family aspect, only those you have added to Family will see the post. However, Family is NOT a group. If you want a true group of Family members, each person in Family would have to include the same people in their Family aspect.

My Activity; This view just shows your posts, including posts that are addressed to you, post liked or commented on by you.

@Mentions; shows posts where someone has mentioned you by using @yourname

By using lots of #tags, its sure to get noticed.


Its lonely over here. And I can't see people making the transition from Facebook unless there is a good reason. The whole privacy thing doesn't seem to matter one jot to most people, as witnessed when someone installs a new App on their smart-phone ("...give me access to everything!" ...OK).

One of Diaspora's aims is to allow import and export of Facebook & Twitter posts. Currently it is possible to export posts from some pods, but the software for importing is still under discussion. If/when Diaspora can import Facebook & Twitter stuff it will certainly help, because having one interface for all 3 social networks will be seen as a benefit by many users.

With less than a million registered users (and probably even less active users) they need to spread the word and up their game.