Well, I say everybody, but that's not exactly true.


Of the 9 healthy looking chicks which hatched from the 9 eggs laid, we seemed to lose 4 during the last few days.


Now is the time to take a look at the data and present a few graphs.

We have recorded a certain amount of data for our Maple Tree bird box, but naturally there are some limitations when it comes to interpretation. 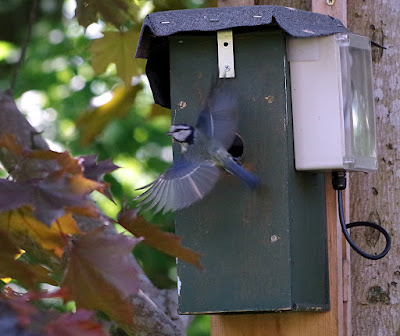 But the prime measurement of interest is a count of the number of times that the bird box entrance sensor is triggered. There are mechanisms in the bird box system to limit false and multiple triggering. Having watched how fast the adults enter and exit, my one concern is whether they could get their whole body past the sensor in under 500ms (in which case they may not always be counted).

During the early stages of box selection and nest building, blue tits often peck around the entrance without entering the box (i.e. they can clock up a high count from the outside). However, once the chicks have hatched, they always fly straight in with food, and straight out again. So it is reasonable to divide the box count by 2 and use this as a measure of the number of "feeds" during this intense feeding stage.

As this basic count is recorded on an hourly basis, we can look at the frequency of feeding throughout the day and attempt to estimate the average number of feeds per chick. Although, having lost 4 chicks along the way, I have to guess which days the chicks died, which is another source of error.

Also note that the system is battery operated, so it "sleeps" if there is no activity after 20 minutes. When it is woken up (as a result of detection at the entrance) it is unable to count activity for about the first 50 seconds. Again, this is not a real problem during the busy feeding stage, as the system only gets a chance to sleep over night.


So the main graph is the easy one, which probably reflects fairly accurately what was going on during the final 20 days. 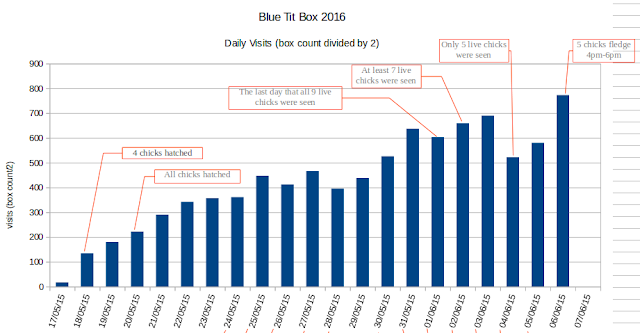 The atmospheric pressure didn't change at a very high rate during these 20 days. And (as in previous years) I can't see any correlation between the "weather" and levels of box activity.


I have created a chart based upon daily box counts for each 1 hour segment. The "hatching" days and the final (flight) day are excluded because the adults do sometimes enter the box without food on those days.

If we add up the total number of calculated feeds over this period, the answer is just over 8000 feeds.

By dividing by the number of chicks (and remember that this started to reduce from 9 around the 1st June) I get the average number of feeds per chick: 1085

Also remember that this figure does not include feeds on the first few days and the last day, which would easily push the result well over 1100 feeds per chick.

It is tempting to try to visualise what 1000 caterpillars would look like. If they were 15mm long and 3mm in diameter, the volume would be over 100 cubic centimetres.   ...some lunchbox!


However, the caterpillars would have been smaller than this during the first few days, and the parents have been supplementing their meals with fat from our fat-ball feeder.


Now its starting to get tricky. It would have been easy if all 9 chicks had survived, but I've had to guess when each of the 4 chicks died, and adjust the denominator accordingly. 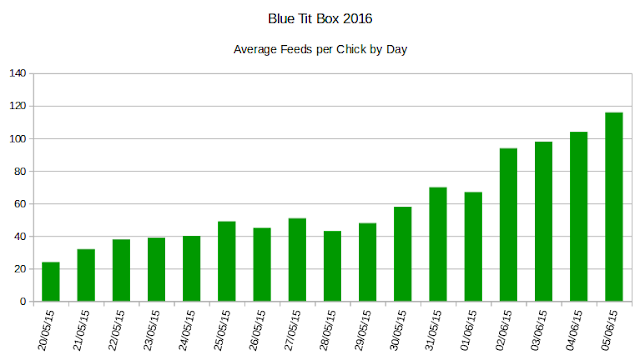 The graph shows the feed rate increasing as the chicks get bigger. But its worth noting that the average size/weight of each feed is also increasing, especially during the first 10 days as the chicks are able to swallow larger items.

Peak visits per hour by day


Not sure if this shows anything very useful, but for this graph I've plotted the highest (peak) number of feeds within an unspecified hour. 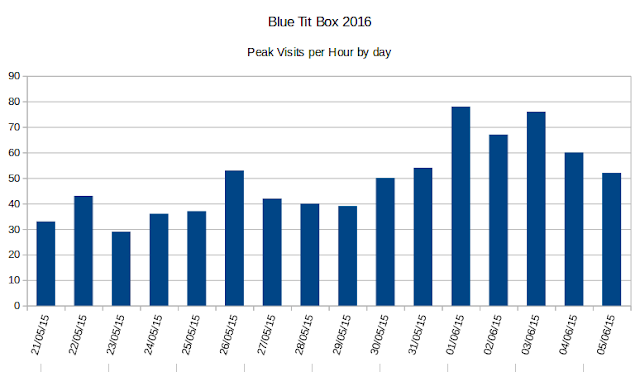 Just why they are able to gather more food during some hours rather than others is not clear (i.e. is food more abundant or are they just working harder?).


What are we going to do with ourselves from now until March 2017?