If you believe what Garmin say, it shouldn't be possible to download topographical maps to the eTrex 10.


In fact the Garmin website doesn't give owners that option unless they have an eTrex 20 or 30 model.


But I've just discovered that it is indeed possible, and now have my eTrex 10 loaded with a nice map covering much of the south-east of England.

As I have previously mentioned, we probably don't make as much use of our Garmin eTrex 10 as we should. But I do carry it around quite a bit when we go walkies, if only to ensure we can find our way back to the car.

The "10" is the cheapest model of the three in this range, with only an 8MB memory. The basic map only includes dots showing major towns and cities. So the addition of better maps which include villages, roads, railway lines and footpaths is a big deal.

So how is this possible.


A couple of days ago I stumbled upon a Russian website devoted to the eTrex10. There is not a huge amount of content, but the author makes some interesting points.

These include;
So you could argue that the "10" is a better device and much better value for money.

Obviously the 8MB memory is a bit of a limitation, as this is also needed to store waypoints, routes and geocache data.

But adding 4 maps only seems to have swallowed up about 3.5MB of storage space. And these maps cover a large chuck of the south-east of England.

The method used is described on the etrex10.ru website, along with the program and map downloads. In my case I downloaded the package for Ireland, Iceland & UK to a Windows 7 computer.

Running "OSM eTrex10 Maps" with your eTrex connected, then allows you to pick the regions you want by simply clicking on the map. When loaded, your new maps are contained in a single file: gmapbmap.img.

I decided to make a copy of this file on my laptop, so that I can copy it back to the eTrex if it gets overwritten at any time (e.g. if we go to the Peak District we would load a different set of maps). 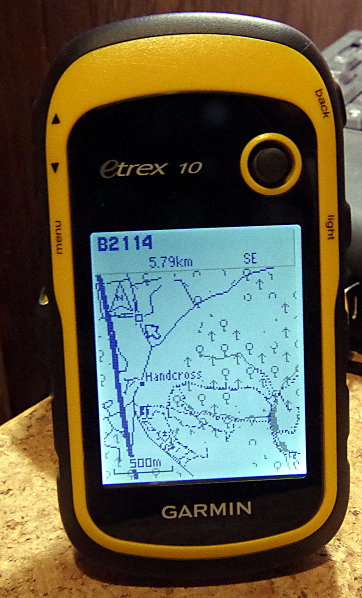 So for me, the eTrex 10 just got a whole lot more interesting!