A couple of weeks ago I swung by the PiHut website to order some bits & pieces.


While I was there I ordered one of their wifi dongles, just so I could try to evaluate its performance compared to my Edimax dumpy dongle.


So I've just spent a couple of hours this afternoon running a few tests.

I notice that Alex has already done a comparison over on RasPi.tv but I think he forgot to include one of the most important parameters. So I'm not going to reproduce all of his data, but I am going to include all 4 of the wifi dongle types that I currently have.

In the photo above, in addition to the PiHut dongle there are the following Edimax models:-


My first test was a check on the current draw from a 12V supply connected via a 78B5.0 regulator to a Pi zero. Also attached to the Pi is a RaspiCam.

I have two reasons for using this configuration; 1) I didn't want to have to worry about the voltage drop on the 5V line caused by my multimeter when measuring current, 2) I'm only really interested in how these dongles compare when running as part of a bird box system (which I power from 12Volts).

The current readings recorded represent the mid-point between max and min as the readings fluctuated. The first column is with the Pi zero booted to the command prompt on Jessie-Lite. The second is streaming video to my laptop.

Unfortunately I was not able to get the AC600 driver installed within the time available, so the tick-over current reading for this dongle may be a little on the low side.


As I run two bird boxes some distance down the garden, away from the house, I am also naturally very interested in the data-rate. The data-rate tends to fall over greater distances, mainly due to corrupted data packets caused by noise and interference. So for this test I just used my little TontecPi as its easy to move around and swap dongles.

Our main wifi access point is located on the ground floor. So I initially did two tests; one with the TontecPi on the first floor, and then again on the second floor. 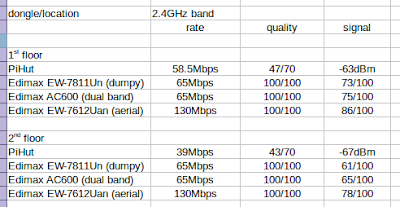 The data in this table was obtained by simply running the command: iwconfig

I don't think you can compare wifi adaptors based upon the reported signal strength. It seems to me that the figures displayed are not scaled in any meaningful way, unless you just want to compare two dongles of the same make and model.

What is noticeable from these results is that the Edimax range of dongles out-performs the PiHut unit in terms of pure speed at any distance from the router that I have tested (I repeated this test at three other locations around the house, in addition to the two listed).

Now I guess it is possible (but extremely unlikely) that the PiHut dongle could work over a longer range than the dumpy Edimax that I currently use in my birdboxes. But if I tried to use a system right out there on the edge of its range, its reliability and speed would not be acceptable to stream video.

However, the PiHut dongle is still the cheapest. So if you just want a dongle for a Pi that is just for general use, it is worth considering. However, the dumpy Edimax is only a £ or two more, it runs much cooler, and will probably give you a faster network connection.
Posted by SteveDee at 22:51