Choosing a new printer for Linux is always terrifying.


But I took the plunge today and bought a new Canon MG3650S.

We have had our old Canon iP1800 for years, its been brilliant, but has recently started playing up.

Initially we were able to drive it across the network from our Linux computers using some driver package that came from god-knows-where. But when we upgraded our computers to 64bit Linux, the driver no longer worked and I could not find a suitable 64bit version.

So I was forced to re-suss an old Windows 7 laptop and use this as a dedicated printing system...what an indignity for a user that switched 100% to Linux in 2008?

Selecting a replacement printer involved short-listing a few likely contenders and then doing a search to see if anybody has been able to get them to play with 64bit Linux. And this is how I arrived at the MG3600 series.

Upon arrival I had to disregard all the software setup instructions for Windows, IOS, Android & Chrome (in at least 27 languages) and search for my drivers. I found what I needed here (link was good at the time of writing):-

As I'm on PeppermintOS I downloaded the Deb packages for both the printer and scanner functions. It was then just a matter of extracting the files from the 2 compressed archives, locating the DEBs (I didn't bother to run the installer script) and installing them.

I tested the printer & scanner functions with the printer locally connected via USB. The Linux driver doesn't give you ink levels, which is a bit of a pain. I couldn't see any notion of best/normal/eco printing so I guess this thing will drink ink faster than I can drink Greene King IPA. But it will print in greyscale or colour.

I then connected the printer to my network using a printer server module (...I know, the clue is in the name). This allowed me to connect to the printer over the network, but (surprise, surprise) I couldn't access the scanner...doh!

So I was forced to use wifi, but how do you set the printer when using Linux without instructions?

After a fruitless 30 minutes, I gave up and connected my Windows 7 laptop and ran install from the CD. This didn't work as it should have, so I had to try a couple of options, and I finally had to use WPS via the Windows laptop.

Anyway, its now good; I can print & scan via our laptops, and do direct paper to paper copying on the printer.

Verdict: too soon to say, but its a nice little 3-in-1 for about £50. Paper feeds in through a tray at the front, and exits just above the feeder. It takes 1x black and 1x colour cartridges, just a shame that Canon didn't put a bit more effort into the Linux driver (e.g. ink levels) and provide some way of setting wifi via Linux.

Attach to Wifi: I recently had to re-connect this printer to our home wifi, and for Linux users, this can be done with reference to this information:- 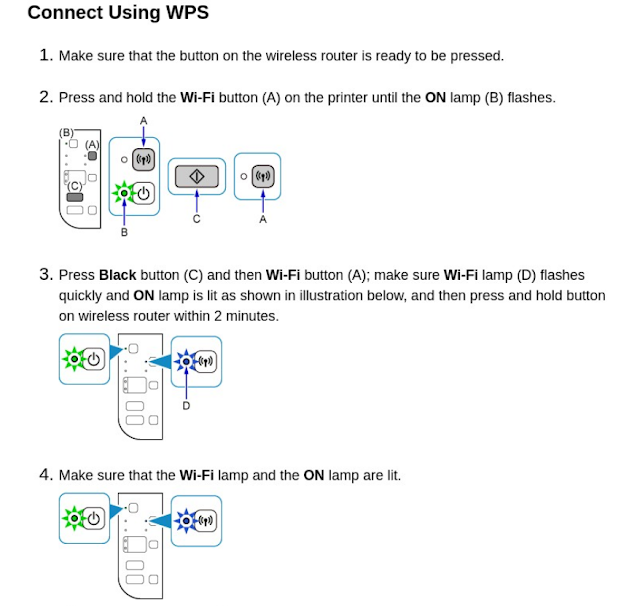 Updated Verdict: this printer/scanner has been fantastic. Highly recommended.