Its been a strange season, and no mistake.

The cold weather, early on, seems to have delayed everything.

And we have seen at least 4 things we have never witnessed before.

I probably say this every year, but I am amazed when I connect a battery to the Raspberry Pi powered bird box camera, mounted 3m up our Canadian Maple, to find that it still works! Built in the winter of 2013, this is it's 8th season. So its been out in all weathers for over 7 years.

The cold weather during this spring seems to have put the garden back by a few weeks. Our trees, which would have had fully open leaves by late April, have only just opened them. So its no surprise that blue tits and great tits were a bit late laying eggs.

Nonetheless, we have a pair of blue tits nesting in our conker tree nest box, and we had a pair of great tits in the Maple tree [camera] box. 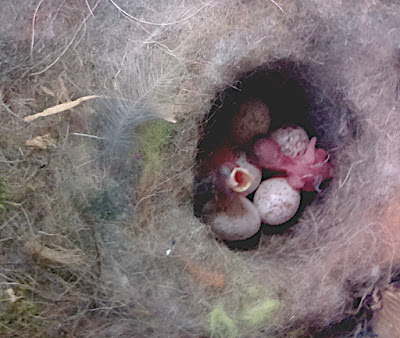 The great tits had 7 eggs, and all 7 hatched. But around the mid-term point (about 10 days) the first one died. The female had a couple of attempts to haul the body out through the hole in the box, but couldn't manage it.

She then dragged the carcass back to the edge of the nest cup and started ripping pieces off and feeding them to her chicks. Whether this was chick flesh or the contents of the stomach, I can't be sure. It was then dragged to the front of the nest box and left in the corner. We have never seen this behaviour before!

Over the next 48 hours, another 2 died. The final 4 looked pretty strong, but the feed rate (as determined by the box entrance counter) looked pretty low.

After a few more days, 3 of the chicks died within a 24 hour period. The last one was looking very lively yesterday, but was standing by the entrance calling for food at about 8pm last night. By this morning it had died. Such a pity as it would have been ready to leave the nest in about 3 days.

He died sitting up, as seen in the picture above. I think this confused the adults, because one or more parent kept coming into the nest with food, looking around for an open gape, and then leaving. This happened about 20 times over a 5 hour period. (Again, something we have not seen before).

Two more unusual things we have seen this season;

We have 2 pairs of robins nesting in our garden, probably 20-25m apart. Naturally there have been plenty of fights around the bird-feeders, but they seem to avoid the more usual fight-to-the-death conflicts.

One robin couple is nesting inside our garden shed, which leads me to the next unusual thing;

Also in the shed we have a robin nest box, which has been used by robins in the past. 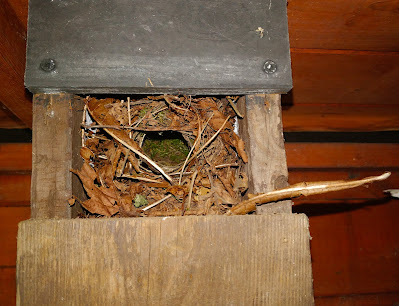 This year it looks like the local male wren has modified it by filing in the front, reducing the entrance to a small circular hole. Male wrens build a number of nests each year and hope to install as many females as possible.

I don't know if there are chicks in this nest, but if there are we should see them in the shed (along with the robin chicks) about the time they fledge.