I put together a portable RaspberryPi camera system a few days ago, so here are a few video clips outside the box.


Inside the box things are not looking great.


I don't think the female has been feeding the chicks at a high enough rate, and it looks like we may have lost a few more chicks.


The portable RaspberryPi camera unit has a PIR sensor, uses my Pi NoIR camera and runs from a 12V battery.

I've attached a small IR filter to the face of the box, covering the lens, using BlueTak. This gave an interesting fault earlier today when the sun shone down through a gap at the top of the filter, creating a purple vertical band. 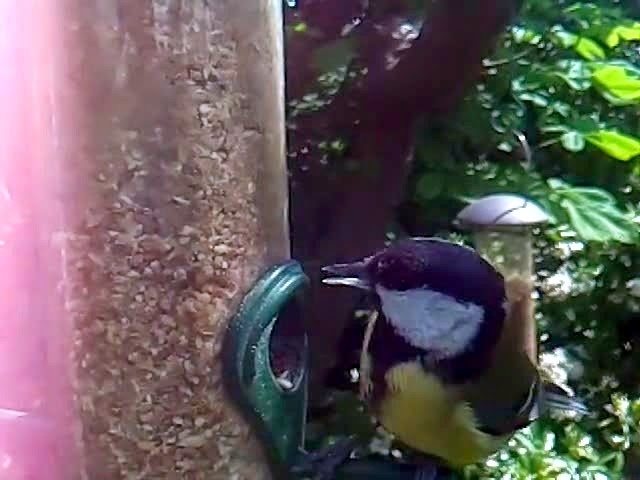 Anyway, nothing that could not be fixed with another blob of BlueTak.

Recorded at 90fps, encoded at 25fps

You may be able to guess from the size of the image that this unit needs to be very close for the PIR to trigger from the heat generated by a small garden bird. The PIR should be less than 12" (300mm) and probably nearer to 8" (200mm) for reliable operation with a fairly slow moving bird.

With a fast moving bird, the system does not trigger reliably. So with the camera mounted outside the great tit bird box I found it tended to trigger when a bird left the nest, but not when arriving.

However, I still managed to capture some useful video by allowing the system to record for several minutes after it was triggered.


Bad News From The Nest


The number of visits made by our lone female dropped off yesterday, and it doesn't look like today has been any better.

We did start the day with at least 6 chicks still fighting for the best position in the box.

But by this evening we could only see 3 beaks opening eagerly when mum entered the nest with food. Maybe this is a more manageable clutch for the female to feed.
Posted by SteveDee at 22:44