Radio Caroline: crank up the power!

Its happened, they've upped their power.

At last they have a new transmitter offering more power and better audio quality.

So its expected to improve reception, both in Caroline's target area and beyond.

The new transmitter is a fully solid state Harris DX 25U. It features something called "Direct Digital Synthesis of the RF envelope using true digital modulation". I've absolutely no idea what that means, despite my training in Telecommunications, so will probably have to look it up.

The word-on-the-street is that this new setup has increased power from 1kW to 4kW. I think that assumption comes from a few guys with communications receivers who are reporting a 6dB increase on their signal strength meters.

I don't think its that easy to just wind-down the wick on a transmitter below its minimum power rating. But maybe we will find out more information in the near future.

what does it mean for me?

When driving around West Sussex, reception on our car radio is certainly less noisy. The sound has a better tonal balance than before, when it tended to be a little too bass heavy.

Our 1955 Bush wireless still cannot pick up Caroline on 648kHz (about 462 metres) in its designated location in the lounge, due to;

However, if I now rotate the set through about 45 degrees, I can actually hear Caroline, albeit with rather a lot of noise. But I couldn't hear anything before the transmitter upgrade.

Its a bit clearer/stronger when I move the wireless to the back of the house, so that the terraced row is no longer in the way.

But despite this improvement, I have no intention of listening to Radio Caroline via 648kHz on our Bush. This wireless is connected to a small transmitter on 199 metres and a Raspberry Pi.

This little transmitter is modulated by the Caroline internet stream from the Raspberry Pi, which provides a relatively clean signal and better quality audio than from 648kHz.

Maybe my nostalgia gland has been clobbered by recent medical treatment, but I no longer have a romantic view of receiving Caroline via a noisy, muffled AM radio signal. Those were the days, eh?

This summer, we had several trips to East Anglia, and I even checked Caroline on 648kHz while driving near Orford. I guess I've been spoilt, as I now prefer to use the Android app Transistor on my phone and listen to Caroline via Bluetooth through our car's stereo. 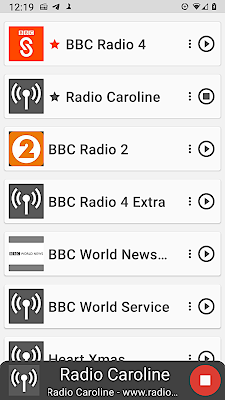