Putting Radio Caroline back on 199 metres

Having refurbished our Bush VHF 54 valve wireless to a point where it is now a working radio, I have discovered that the Medium Wave band is a bit of an electromagnetic desert.


The strongest station in our area is something called Talk Sport, which mostly features two guys talking utter cobblers.


So if this old wireless is going to be more than just a piece of furniture, I need to establish my own radio station.

Radio Caroline started life in 1964 on 1520kHz in the Medium Wave band, announcing its wavelength as 199 metres (actually 1520kHz = 197.2m). Although it has recently been granted a community license to transmit on 648kHz, the transmitter in Suffolk is not strong enough to penetrate the walls of our house over here in West Sussex and provide a suitable signal.

However, Caroline is a truly international radio station via the internet, so the best way to listen is to connect to a stream.

back to the project

So anyway, the idea is to build a signal generator that I can modulate using the output of a Raspberry Pi, with the Pi setup to receive Radio Caroline via the internet.

Using a signal generator or low power transmitter to serve up music to an old radio is not a new idea, but I haven't found another design that utilises a Pi as the audio source.

Other simple transmitter designs (on the net) for this purpose often use a single transistor oscillator, amplitude modulated (AM) by an audio amplifier stage. These designs are rarely satisfactory because the oscillator frequency tends to vary with voltage variations and modulation. In fact they often produce a lot of frequency modulation (FM).

So with this in mind I sketched out an oscillator circuit, used an online calculator for approximate inductor/capacitor values, and then ordered a few quids worth of components from Bitsbox.


I built the oscillator/modulator prototype circuit on a small breadboard, using my Hantek scope module to check waveforms and oscillator frequency. Initially I powered the board from 4 x AA batteries (about 6 Volts). After just a few hours of experimentation I settled on this circuit arrangement. 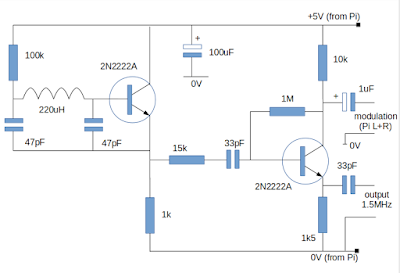 Using a 220uH inductor, I calculated that the two associated capacitors should be 47pF to give the oscillator a theoretical RF frequency of 1565kHz (about 192 metres). But with my circuit built on a breadboard (and presumably with plenty of stray capacitance) I needed to drop the capacitors to 33pf in order to run at an acceptable frequency.

From my initial checks, it looks like you get the most symmetrical wave shape by keeping the two capacitors the same value. When I build the final version on Vero-board, I may leave space for a couple of very small variable capacitors (trimmers) to fine tune the frequency and optimise the wave form.

Although I'm not too bothered about the actual frequency (I'm more concerned about stability), it would be nice to run Caroline at 199m.

The second transistor forms the modulator circuit. Its not there to create a lot of RF power, as I'm not planning to transmit music to the local community. This stage buffers the oscillator, and is modulated simply by connecting the Raspberry Pi audio output to the transistor's collector with respect to 0Volts. Initially (with a direct connection) the audio seemed a bit bass-heavy, so I added a 1uF coupling capacitor.

Screened cable is not a good choice for connecting the Pi to the modulator, as the cable capacitance tends to distort the RF wave shape.

I think whats happening here, is that a small amount of cable capacitance between the transistor collector and 0V is quick to discharge (due to the low resistance of the conducting transistor) but slow to charge (via the 10k resistor). This is creating a delay at the lowest part of the signal as the transistor transitions from low to high.

Note that the 1uF capacitor is not making this any worse, because it is connected in series with the cable capacitance. So its better to use a short length of un-screened cable rather than co-ax.

I used the Linux command on the Raspberry Pi:-

...while testing the modulated RF output.


Initially I also had a lot of 'mains-hum' type interference, which was even worse when I changed to a larger Pi PSU. But I managed to eliminate this by connecting the supply 0Volts to the radio chassis earth socket. I guess connecting the Pi PSU 0V line to mains earth may also work.

Clearly, transmitting on the medium wave may upset your neighbours and the people responsible for investigating radio interference issues. So you should take steps to limit radiation of both fundamental & harmonic frequencies.


This design should only be used as a signal generator, NOT as a transmitter, as it will create a certain amount of low level interference at various points in the frequency spectrum. Only use direct connections to the aerial & earth sockets on the radio, via a screened or twisted pair cable.

The idea is to get a good signal to the radio to reduce noise, but not too high that the RF input stages overload. The magic-eye on my Bush is quite useful for setting this. The output coupling capacitor to the radio needs to be a small fixed value or a trimmer. You could add a suitable in-line resistor if the signal level is too high.

The Pi is running Python code as described in this earlier post. See my Internet Radio URLs page for station urls including Caroline and Caroline Classic.


I've been running this setup for a few hours each day over the weekend to see if its 'stable'. Its looking (& sounding) pretty good. I certainly don't have to chase the station up and down the medium wave; once set, both signal generator and radio stay on frequency.

I now need to decide how I'm going to package this system. I don't want to build it into our Bush radio, as this set is still pretty much original. So I may just keep the Pi in its own case with audio and 5V power to a small box housing the signal generator. I can lose these small boxes and cables behind our sideboard. This also has the benefit that I can use the current Pi lounge radio, and just move it between the Bush and the stereo as required.

EDIT: its now a few weeks on, the system has been packaged, and it works just fine. The two 47pF capacitors were replaced with 43pF (i.e. 33pF in parallel with 10pF) which gives me a frequency of 1.5MHz (199.9m).
It is only the engineer in me that hates those ugly waveforms, which indicate that the design is far from being perfect. So I may have to revisit this when time permits.