Disaster struck in the Bodgit house last week when Lady Bodgit announced that the Magimix had stopped mixing. I say "disaster" because without it, production of LB's delicious fruit cake came to a halt.

I'd noticed that the rotating blade had been difficult to remove the last few times that the Magimix had seen action, and had advised the use of Extra Virgin Olive Oil to free it from the rather misshaped motor spindle.

However, the spindle was now spinning, but the blade was not. So it was beginning to look like a new (and expensive) mixer was required.

Fortunately, a quick search on the inter-webbie revealed that a little company, located in the valley to the west of the Hogs Back, were still supplying spares (http://www.magimix-spares.co.uk/Magimix-3000-Spindle-Cover-White,-Nylon-Driveshaft-/product/100453/100453/). Quite incredible, as LB had bought this Magimix Cousine System 3000 well over 30 years ago, about the time she married her first Mr Right.

Initial attempts to prise off the old spindle were unsuccessful, and there was a danger of damaging the body of the mixer. So I started by cutting vertically through the spindle with a junior hacksaw, being careful to stop once I reached the metal shaft attached to the motor. 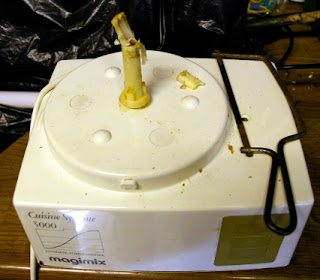 I then added a very small amount of light oil to the top of the exposed shaft, and left the unit for about 20 minutes (just enough time for a cup of tea and McVities Digestive!).

The spindle was then very easy to lever off.

Notice the CD and old putty knife used to spread the load and protect the top of the Magimix from the 2 screw drivers used as levers. 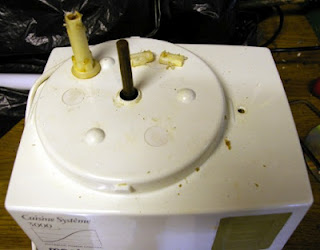 The new spindle was simply pushed onto the motor shaft, once correctly aligned with the flat on the shaft. A few gentle taps with a wooded mallet was all that was needed to fully drive the spindle into position.

Bring on the Fruit Cake!
Posted by SteveDee at 09:38

Email ThisBlogThis!Share to TwitterShare to FacebookShare to Pinterest
Labels: Magimix