What is Lubuntu and why would I use it?

You are probably reading this on a netbook or an iPad, or maybe a smart phone, or maybe one of dozens of other devices. All of these devices have 2 common attributes; they include "hardware" and "software".

Software, of course, is invisible but you can see the effects of it on your hardware. For example; it lights up the display and responds when you click an icon (sometimes). So in order to get your cold hardware to do something, you need software.

To make life easier, your computer has some software called the "Operating System" which breathes life into the hardware, allowing you to not only run applications (like email & web browsers) but also to install applications of your choice.

On the device you are staring into at the moment, the operating system maybe Android, Linux, Windows, IOS or something else. For example, your PC may have the Microsoft Windows 7 operating system upon which you have installed Firefox web browser and Adobe PhotoShop.

The term "Windows" is commonly taken to mean an operating system produced by Microsoft (e.g. Windows 95, WinXP, Win7 & so on). The terms "program" and "application" generally refer to software which carries out a task or a set of related tasks (e.g. web browsing or photo editing).

The dark and scary world of Linux
Linux is also described as an operating system, but it does not include a colourful (or graphical) user interface. Is it in fact the central core or "kernel" of an operating system and is typically packaged into what is known as a "Linux distribution".

A Linux distribution is essentially some Nobby-know-all's idea of what is required by you, the computer user. It may include a graphical user interface (GUI), a file manager (so you can add/delete files), a menu structure (so you can find/list your applications), and a web browser (so you can search for unsuitable images on the inter-webbie). A Linux distribution can normally be installed on a computer, or sometimes just run from a CD or memory stick.

There are probably hundreds of different Linux distributions, and most are free to install and use (See DistroWatch:  http://distrowatch.com/).
The "Debian" distribution is very influential, as many of the popular distributions are based upon it, including Ubuntu & Mint.

And so to Lubuntu, which is a Light-weight version of Ubuntu (did you see what I did there?).

"Ubuntu" is apparently and ancient Zulu word meaning "All computers are a pain in the arse!".

In the Linux world, Ubuntu is both the name of a distribution and the name of a family of distributions. So in addition to Ubuntu and Lubuntu there is also Edubuntu (the schools version), Mythbuntu (a TV & media centre) & several more in the Ubuntu family.

Although Lubuntu does not include many applications and basic features which come with other operating systems, they can easily be selected and installed from online "repositories". 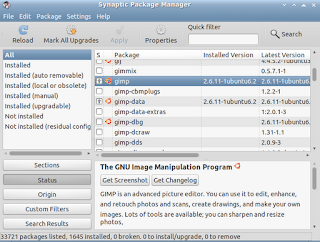 Each application package ensures that programs are installed with any dependant software also included. The package also includes a program "category" to ensure a menu entry is created in an appropriate part of the menu structure. 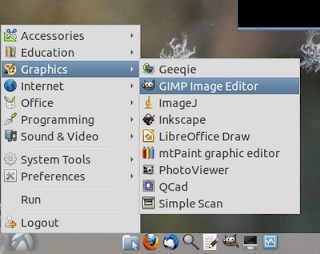 Lubuntu has a simple menu system with customizable task bar

This allows you to build a system that more closely matches your needs, however this approach may not appeal to everyone.

You should probably avoid Lubuntu if:-