The kind of camera normally used for bird boxes produces a composite video output designed for use with a television. In fact, if you still have an old analogue TV, this will make an ideal monitor.

Some cameras also include a microphone. The added dimension of sound is a great benefit, so choose this type where possible.
As there is very little light inside a bird box, most cameras used for this purpose include infrared lights (IR). Invisible to the birds, this light can be used day and night without problems, although it does give you a slightly weird grey-scale image. If the natural light level does rise during the day, the camera may automatically switch off the IR lights giving you either a monochrome or a colour image, depending upon your camera type. But once again, the shades or colours will look a little strange because the camera is so sensitive to IR light (I may discuss this future in a future post). 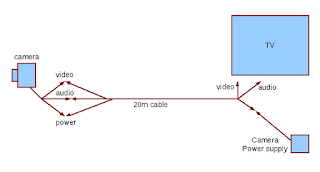 Buying a camera (or even a box with camera)

You can now buy bird nesting boxes complete with camera kits from garden centres and on-line suppliers like this:-
http://www.handykam.com/Wired-camera-bird-box-systems/View-all-products.html

But if you want to DIY, its usually best to start with the camera and then build a box. The reason I say that is because you need to consider the image area and the camera mounting arrangement first.

The camera shown below is a suitable (and cheap) colour camera available from Maplin:-
http://www.maplin.co.uk/miniature-covert-nightvision-cctv-camera-with-audio-104962 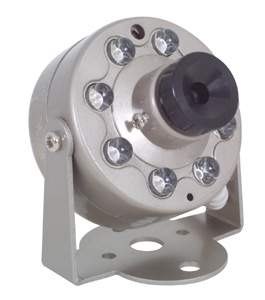 To focus, slacken the locking screw on the lens mount, and rotate the lens until the image is sharp.

The smaller garden birds (e.g. blue tits) tend to select nest boxes with relatively small openings. Presumably this reduces the risk of larger birds and other predators raiding the nest. However, birds such as the robin prefer to nest in open fronted boxes, even though this leaves them rather exposed.

Sometimes garden birds choose weird places to nest such as watering cans and traffic cones. But its best to follow sensible box designs when building your own to improve success rates.

There are plenty of designs available on the internet, so rather than providing a detailed design, here are a few design considerations.

This is a short list of birds with box opening sizes:-

If this is your first and only bird box, I'd recommend a box with a 28mm entrance hole, as this is likely to attract blue tits or great tits. 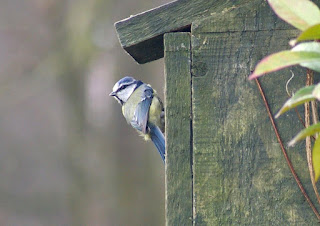 These are the two species that commonly (and readily) occupy nest boxes, and you want to give yourself the best possible chance of success if you are only putting up one box.

Now! Where should I put the box?

The first consideration is cable length. If your camera came with 20m or 30m of cable, you must allow for this, and some of this length will be consumed by the path between bird box and TV. Extending this cable may introduce noise, as the cable supplied is usually low quality. So if your cable is not going to be long enough, it may be better to buy a better quality [longer] length to replace the original cable.

Try to find a location where the box can be mounted about 2m above the ground, with the entrance hole facing out towards reasonably clear space (i.e. don't bury the box in a bush, or face it towards a wall or fence that is just a few feet away!). If you can see the box from your house (especially from the comfort of a easy chair) so much the better, as you will be able to witness the birds behaviour both inside and outside the box.

If you have bird feeders (and if you don't, you should have) do NOT put your bird box nearby. I'd suggest that the box should be 10m away. If this is not possible, then at least face the box away from the feeders. Maybe move the feeders if this is easier, at least during February to June.

If possible, avoid easy access for cats, as they seem to be the biggest single reason for avian loss of life! Ultrasonic cat deterrents do work on young cats with good hearing (and young people). Old cats with bad hearing don't bother to harass birds.

Some articles are very specific about bird box orientation (e.g. "don't face it due south as it will get too hot!"). But we have had success with boxes pointing roughly north, south, east & west. In the spring, the sun is lower in the sky but relatively weak. As spring turns to summer the sun gradually moves over-head at midday. So a south facing box gets the benefit of the sun during the cooler months earlier in the season, while in summer the sun is too high to shine directly through the entrance hole and cook the chicks.

Nest boxes can get very hot by the end of May/early June for any orientation where the box is not shaded for most of the day. So the branch of an over-hanging tree can provide some relief.

Don't sit in front of your TV for hours on end, waiting for a bird to turn up. It will drive you crazy!


Your Garden Birds May Not Have Read This!

Surprising at it may seem, not all garden birds have internet access, so they may not have read this post. One of the great pleasures in watching garden birds is witnessing unusual behaviour.

All the "rules" listed in this post are there to be broken. They are just offered to you with the hope that you will be successful, and this will encourage you a put up more nest boxes, and maybe experiment a little.

May the force of Bill Oddie be with you! http://www.billoddie.com/
Posted by SteveDee at 12:40