I'd suspected something funny was going on.

We knew we had two hedgehogs of similar size visiting the feeder.

But the camera monitoring the hog box entrance confirmed my suspicions.

Having a video camera positioned at the entrance of our hog box this year has proved to be very useful. Its a Raspberry Pi Noir camera with a iR light source and, as its located quite close to the garage, its powered from a mains power module 24hrs/day.

The downside is that it records a lot of video clips, sometimes triggered when wind blows the leaves around. But we also get to see birds, mice, rats, hedgehogs and the occasional frog.

We had a single hog in residence a few months ago, which we believed to be female. A few weeks after she left the hog box, she started to re-appear at the feeding station with 2 small hoglets. So it looked like she left our lovely box to give birth somewhere else.

The hoglets steadily put on weight and we believe the two hogs we most frequently see now on both feeder and box cameras are the same hogs. But of course we cannot be sure, as its often very difficult to identify hedgehogs.

However, what we are sure about is that 2 hogs are now sharing the same hog box. We see from some of our video clips that when they meet up, they sniff one another briefly, but there is no sign of aggression. They seem to go in and out of the box independently, at different times. But this video shows a hog entering the box at 1.45am and the second one follows about 7 minutes later.

The second one comes back out, collects a few more leaves, and goes back in.

The hog box is absolutely stuffed with leaves and other material. I did try to take a closer look but found that I couldn't just remove the top covering because its all matted together. 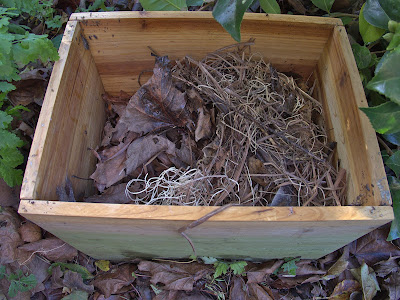 Its also quite damp further down, which I hope is just due to condensation. I can't see any weather related leaks, and the top of this wooden box has a second metal cover to help keep it dry. I don't think that the damp is a problem to the hogs, they must be used to sleeping in rather wet conditions.

Their comings-and-goings reveal a couple of interesting points. I'd assumed that hedgehogs would make the most of the night to forage for food, and not return until sunrise. However, they seem to go out for a couple of hours around dusk and then return. They may stay in the box for an hour or two, then go out again. They may have 2 or 3 'rests' during the night.

I suppose this could indicate that they are finding plenty of food at the moment, and I'm sure the complementary GoCat! biscuits in our feeding station are helping.

One of our hogs has a disgusting habit, he keeps licking my PiCam.

Maybe he was a window cleaner in a previous life!

The second point, from these and previous resident hogs, is that it appears to be perfectly natural for hogs to be out during the day. It may be that they fancy a drink or a snack or they simply don't want to soil their little home.

So don't be in too much hurry to scoop up 'daylight' hedgehogs and rush them off to a rescue centre. Unless thay are staggering around in a drunken fashion, its much better to put out clean water and GoCat biscuits (other brands are available) and let the little guys keep their freedom.