I now have a smartphone with a non-Google operating system.

I'm not registered with the Google Play Store either.

After my wife's OnePlus 5 fell into a stream, it started doing strange things, so was replaced with a new OnePlus 8.

Over a period of 2 or 3 days, I put the OnePlus 5 into the oven at 30'C for just an hour or so for each session. I also manually exercised the little ring-vibrate-silence slide switch maybe 50 or 100 times. And the end result was an apparently reliable phone, which is now all mine!

For that last few years I've been waiting for a smart phone running Linux. Turns out I was standing in the wrong queue.

After studying the section on the LineageOS website that covers the OnePlus 5 phone, I took the plunge to replace the Google based OS with the Lineage version of Android.

A point to note regarding re-booting the phone during this process is that there are 2 special boot modes using the phone's hard keys:-

...it would have been better the other way around (i.e. 'Down' for 'Download')

I'm not going to write out the install process because its already covered here: Install LineageOS on cheeseburger

As my computer OS/distro is Linux Peppermint 10, I simply installed the required computer packages fastboot & adb from the Peppermint repository, which gave me:-

These may not be the latest versions, but seem to be fine for this procedure.

Naturally I chose not to install the Google Apps package. I download my apps anonymously using: F-Droid, APKPure and APKMirror. 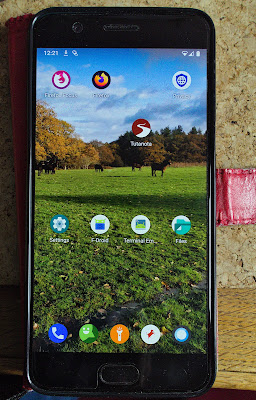 There seem to be some apps built into the image that you cannot delete, but you can hide & disable. As the operating system is claimed to be 'safe' in that it does not relay information to Google, I assume that these built-in apps are likewise safe.

The main problem for me is was finding a suitable web browser, as main stream browsers like Firefox and Chrome report user data to Google. One exception is the Privacy Browser, which I have installed and I'm making use of it. However, it does not save usernames & passwords, so its not a complete solution for me but I have now installed Midori browser (via F-Droid) which does!

So I think because I'm also using Firefox and Firefox Focus I still can't claim to be 100% free of Google.

I've been using this phone for over a week and its been great...no problems so far.

I don't have a huge number of apps installed, but they include:-

I was notified of a LineageOS update a couple of days ago, and this downloaded and installed without any issues...

I now realise that F-Droid is a store of open source applications, which also lists the Permissions for each of its featured applications. As APKMirror & APKPure do not give this info, I've stopped using these sources.

Consequently I've removed the Firefox browsers I was using and have switched to Midori. In order to use the swisscows search engine with Midori, the Midori search engine string needs to be set to: https://swisscows/?fromAndroidApp=true

On my Huawei tablet (which is still running Google-Android) I've also removed Firefox in favour of Midori, and have installed Frost for Facebook (also from  from F-Droid) and it's looking pretty good. I guess Facebook can still track my every move, but this wrapper has a better interface.