Up until recently, viewing videos on YouTube was not a problem.

Is there some way around this?

This is part on my on-going experiment to see if I can live my 'internet life' without Google looking over my shoulder. Obviously this blog is an indication that I rely on Google. But I have 4 devices:-

According to the websites that I've been consulting, there is now no way to view YouTube unless you sign in with an account. But for the moment at least, that is not true.

I guess the YouTube API does not require log-in, so there are plenty of apps on F-Droid that could potentially get around this problem. I have just installed the first one I came across: NewPipe Legacy on my Huawei table... 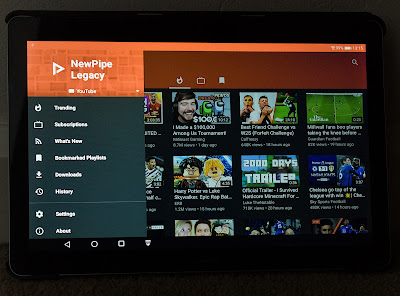 YouTube is not the only internet video provider on the internet, but its one of the biggest. However, I'm not a huge YouTube user, so if I couldn't use it for some other reason in the future, it wouldn't really bother me.