Trekarta is a Global Navigation Satellite System app for Android.

It seems to offer similar functionality to my old Garmin eTrex 10.

So is it an adequate replacement?

I've had a hand-held eTrex 10 for the last 6 years, and its proved to be very useful on many a walk around England & Wales. We decided it was a good idea to buy one after getting lost somewhere in Kent, and struggling to find the right path back to our parked car. 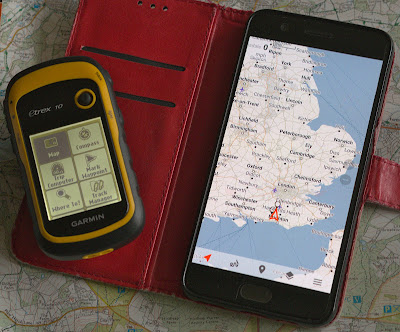 So since that time, if we are walking in an area that we are not familiar with, I will set a waypoint on the eTrex before we leave the carpark!

a simple guide to Trekarta

I'm sure most people find this application very easy to use, but I come from a generation that doesn't realise that there are 99 different ways to interact with a smart phone screen. I've learnt some of the basics like: tap, press, head-butt and dragging your tongue from left-to-right across the screen. But I still seem to struggle guessing the right technique to find that elusive setting.

In the following description, I generally either use a simple short tap or a press-and-hold just long enough to get feedback (vibration) that the press has been accepted and/or the state of a control has changed.

Trekarta works well with pre-downloaded maps. This means that while in use for its primary purpose, you don't need to be connected to the internet. To make use of a GNSS (Global Navigation Satellite System) you just need to be within range of a bunch of navigation satellites (e.g. GPS, GLONASS, Galileo or whatever). 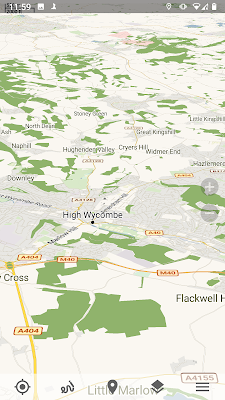 this menu includes settings for; Speed, Distance, Elevation & so on

As mentioned above, a short tap on Target may change the button to an Arrow (at a slight angle)... 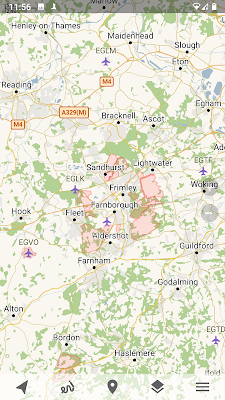 ...and will also move the map to the current location.

short tap on the Menu button, then select Manage Maps. 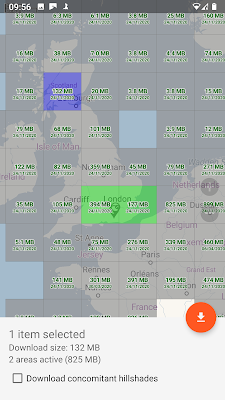 Green tiles indicate areas of the map that have already been downloaded. When you select a new map tile, it will turn blue. Now press the download button and wait for this new map tile to download.

Your device can now be used with your downloaded maps without the need for an internet connection.

let's compare Garmin eTrex with Trekarta on my OnePlus 5

Obviously the display on the eTrex is no match for the OnePlus. The phone has a bright, colour display while the eTrex is monochrome. Trekarta's maps are much more detailed and easy to read.

The eTrex can be painfully slow when entering text such as waypoints, and navigation is via a joy-stick.

The eTrex clearly has a better receiver. There are much fewer reasons to compromise performance in a dedicated hand-held GNSS device, than in a smart phone packed with electronics and sensors.

Its very easy to compare sensitivity. I only have to put my eTrex and my smart phone on the coffee table in our lounge and wait a couple of moments. The eTrex quickly locates signals from about 6 satellites, while Trekarta on my smart phone just keeps spinning the icon and doesn't manage to lock.

The point about this test, is that in poor reception areas, such as wooded and hilly regions, the eTrex is both more dependable and more accurate.

Navigation systems that rely on satellites must be able to get a good signal from at least 4 transmitters. Smart phones with navigation apps try to improve performance by supplementing satellite data with information from phone towers and the internet. At the moment I'm only using satellites.

But to further illustrate this sensitivity problem... 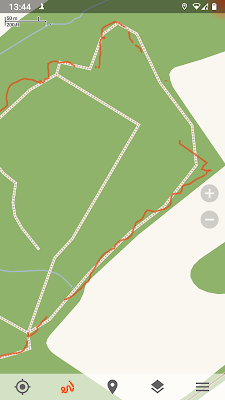 ...during this woodland walk along footpaths, the course plotted by Trekarta not only deviates from the path, but also stops reporting my position on several occasions.

And one final screenshot shows that I took an interesting route driving around a roundabout.

Tracking position with a smart phone inside a car can be a challenge at the best of times.

Trekarta has an optional "Extra Precision" mode located in the Settings menu, which simply takes more samples (I think the rate is about 2 - 3 samples per minute) and effectively improves resolution, rather than improving precision.

Clearly I need to continue testing.

Back to the eTrex 10, this has a fairly dependable battery life; with two new AA batteries it will last about 30hours. When we used navigation/GNSS software 6 years ago on whatever smart phones we had, we pretty much flattened the batteries in 3 or 4 hours of use. (so couldn't navigate or call for help!)

A test with a new OnePlus 8 (obviously with a new, fully charged battery) indicated that battery level dropped from 100% to 70% in about 3hours.

The eTrex has a high level of waterproofing/weatherproofing. So this is the one to carry if your life depends upon having a reliable navigation device.

The jury is still out.

I need to do further testing on both the OnePlus 5 and the OnePlus 8, especially as the OnePlus 8 has a dual-band receiver which, in theory, may allow centimetre accuracy once all the satellites have been updated.

There is a lot of misinformation on the internet about military accuracies being far superior to what can be achieved with civilian equipment. This is wrong. Over 20 years ago Bill Clinton brought in legislation to ensure that everyone could benefit from the best GPS performance.

There are fundamental performance issues with each system (i.e. GPS, Galileo & so on) including ranging errors, the affects of atmospheric conditions and multipath/reflected signals. The introduction of dual-band should considerably reduce some of these issues when using devices equipped with dual-band receivers.

But even if the GNSS was perfect, you would still have to consider the limitations of the device's electronics (including receiver and its aerial system) and its ability to do the calculations.

You may also find the Android app GPSTest of interest.