I'm really not sure how we got into this mess!

We seem happy to give away private information to anyone,

just as long as we are allowed to search the web or download trivial apps.

We seem to have just drifted into a situation where we not only trust the big internet giants, but also the little guys writing simple 'compass' apps where we give permission for them to access our emails, our address books, our location and heaven knows what else!

In the past I've tried to separate my financial/banking activities from general net browsing by using either separate web browsers and/or SSBs (site specific browsers). But this year a number of things have come together, causing me to dig deeper and evaluate a few more security related possibilities.

Back in the spring, I bought myself a Huawei MediaPad T3 10 tablet with a vague notion that I might replace Android with a Linux OS. I'd found a couple of articles which said it was possible by simply getting a bootloader unlock code from the manufacturers, and then download some apps and following a set of instructions. However I couldn't get the unlock code. A bit more searching revealled that Huawei had stopped proving the code about 10 months before my purchase. I think they got fed up with customers bricking their tablets and then complaining.

So I settled down to using the tablet for trivial stuff like Facebook or checking the news & weather, while at the same time removing Facebook from my laptop. When my new laptop arrived, I went one stage further by replacing Google search with Swisscows. I also created a new email account with Tutanota. 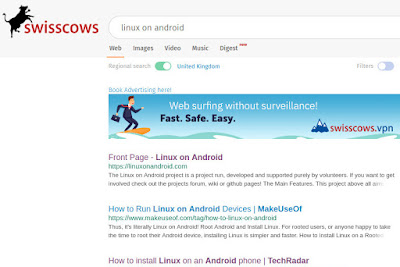 Swisscows does not collect or track data, and (as its name suggests) is based in Switzerland, so not covered by the US Patriot Act. This means the US government can't demand to see whatever it is that a search engine knows about you.

Tutanota is a secure German email service, so the same applies, plus I can now send and receive encrypted mail (...although I'm not sure that I need too).

As we all prepare to go back into hibernation, I've started looking once again at my tablet.

My first experiment was to install AndroNix, which is like an emulator, but I think its technically described as a 'Compatibility Layer'. Either way, it allows you to download one of several Linux distributions for installation on your Android device. I initially chose Debian + LXDE but this didn't seem to want to run, so I then tried Debian + XFCE which was a little more successful.

With Termux, VNC Viewer, AndroNix and a Linux distro, you basically start Linux via Termux and then start a VNC server on Linux. Then you connect to the server via the VNC client on Android.

They warn you not to shut down Linux before disconnection the VNC client, as you won't be able re-connect a second time with the client. However, my Linux install only runs for a couple of minutes before shutting itself down! I then have to start it again and use the command line in Termux to delete a couple of files in the /tmp directory (actually one in this directory and another in a sub-directory).

I could tell this wasn't going to be a great experience, so I soon gave up with it. There are other 'Linux on Android' Apps/packages that I haven't tried, but reviews indicate that they often use VNC and/or they run disappointingly slow.

After a bit more research, I decided I could do a lot more stuff with the Android OS to make it more secure.

I still don't like Android, probably because I don't understand it. I seem to be confronted from time to time with dialogue boxes that don't have 'cancel' buttons (e.g. "press this button to do bad stuff or this button to do really bad stuff"). But anyway, I thought I'd push on regardless.

How to install Android apps without registering or logging onto Google?

Easy, don't download from Google Play store, just find another reliable, safe place to get APK files anonymously. I've used APKMirror, apkpure and F-Droid, but you will need to satisfy yourself that these are safe.

I wanted to open all websites in 'desktop' mode, not mobile mode. The best I've been able to do so far is to switch to desktop mode after I open a site on Firefox or Firefox Focus. I can't seem to do this on Firefox Lite as I'm missing the hamburger menu (3 vertical dots). The Lite version also seems to want to start in portrait mode, then switches to landscape when you select a website.

I should be able to open "about:config" in Firefox and force the browser to load the desktop version of all websites, but it doesn't seem to open for me on the Huawei tablet.

Anyway, the current status is that I have Facebook running only within a dedicated browser on the tablet, and I'm not using anything Google...

...Oh wait, I forgot about the operating system!

This is where things move up a gear. There is a version of Android that has been de-Googled, its call LineageOS.

Although there are only a handful of Android devices that can run and have been tested with LineageOS, one such device is the OnePlus 5 phone. And someone not a million miles from me has one of these  ...I may have to splash some cash and buy her a new replacement phone!

At the moment it seems likely that a cut-down version of Android is going to be a better option than trying to use a desktop distro of Linux squeezed onto a phone or tablet.