You are just itching to get your hands on a new app release...

...but its not in your distro's repository.

There are a number of solutions, but these notes only cover one of them.

By the time you get your hands on the latest release of your favourite Linux Distro, the application software in its repository has been locked, often to an old version.

On the one hand, you hope that the new distro release is stable, and has been properly tested. While on the other, you may notice that your favourite video editor has since been upgraded and now includes a few tempting features that you would quite like to get your hands on, if only you could simply just select it via the software manager and install it.

Linux distro version releases have to tread a difficult line between stability and flexibility. And that's just one of the reasons that there are so many different distro available to us lucky Linux users. Some aim for high reliability/stability such as Debian, while others aim for 2 or more releases per year.

In my 12 years as a serious Linux user, I've tried a few distros, although only properly using for desktop (and moving on from) Ubuntu, Lubuntu, Mate and finally [currently] settling on Peppermint as my day-to-day desktop OS. At the moment I'm very happy with Peppermint 10. I had expected by now that V11 would be out, but due to the loss of their primary developer, this could still be some way off.

With any new distro release, I'm also concerned by the possibility of new problems that may have crept in, or old ones re-emerging. In the past this has included stupid things like wifi instabilities, that were not a problem on earlier releases.

So in some ways, sticking with an old, stable distro can save you grief. That just leaves you with the problem of how to get your hands on that nice, shiny, new software application release.

If its not in your distro's repository, one way to update an application to a newer release is to find some kind person who has created a Personal Package Archive (PPA) containing the new application release. I think the most recent version of Gimp in the Peppermint 10 repository is 2.8.something. I updated to 2.10.14 some time ago by installing the 'otto-kesselgulasch' ppa, but this itself has not been updated beyond this release.

However, someone called Panda Jim has created a ppa which includes the latest version of Gimp.

You may by now have realised that these repositories/ppa are unofficial, contain no warranties and are strictly use-at-your-own-risk affairs. They are easy to add to and remove from your system.

My first attempt at installing Gimp V2.10.22 from this repository failed, in as much as when I selected Gimp from the menu for the first time, nothing seemed to happen. I then ran "gimp" from the terminal and got a message something like:-

This took me down a rabbit hole where I uninstalled Gimp and then any package which included "gegl" in the name, before re-installing Gimp. But long-story-short, the real solution is to remove the 'otto-kesselgulasch' ppa first. Then you can add Panda Jim's ppa and go back to Synaptic and re-install the most recent Gimp version (e.g. 2.10.22). 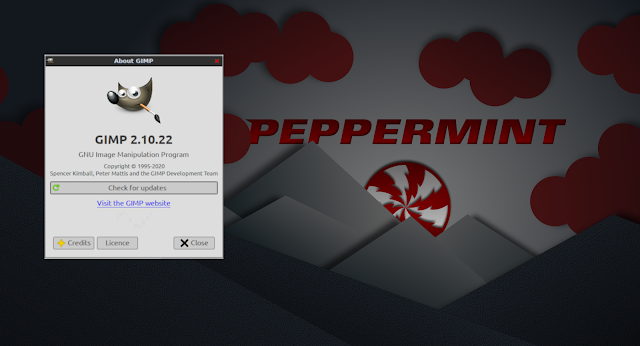 Obviously you can use terminal commands or Synaptic to do these tasks, but I seem to switch between the two in a completely illogical fashion, for which I apologise, but hey! these notes are really for my benefit, not yours.

Also note that if you take the same butterfly approach, terminal 'apt install' commands won't work while you have Synaptic open.

Do check that the ppa will support your current distribution. For example the terminal command:-

Note however that I couldn't get this procedure to work on a system running Peppermint 9 Respin, despite this also being based upon 18.04. The problem was I didn't have the option of installing the required version of libgegl (I've no idea why).

Panda Jim has not built the latest version with/including Python. What this means is that Python plugins will NOT work.

If Otto can be persuaded to come out of retirement and resume updates to his ppa, or share his knowledge with Panda Jim, that could all change.

Alternatives to the ppa approach?

You might want to look at containerized application options such as Gimp-Portable (currently at 2.10.18), 'Flatpak' (https://www.flatpak.org/) and 'Snap' (https://snapcraft.io/) But I'm not wildly keen on this approach (probably old dog...new tricks) so its not-covered-here.

Sometimes it may be necessary to build from binary files, but that's another story.