I've never been able to resist a good body.

Especially when the controls feel nice and are easy to access.

Although I'm very happy with my Olympus E-M10, when I recently noticed a used 'M5 body on sale, I couldn't resist ordering it.

Well no, its another light-weight camera.

It is very slightly larger than my M10 and it does weigh a bit more, but not very much, just 60g (about 2oz).

As the G9 is such a lump to carry around, the M5 (either this one or a new mk3) is a candidate to replace it. So my wife is currently field-trialing the M5 to see how it suits.

The M5 has a swing-out-and-rotate display screen, so is comparable to the G9. My M10 has a more restricted tilt screen, which is not a lot of use for portrait mode photos (although this rarely bothers me).

I set my camera to manual mode 99% of the time. My ideal camera would have 3 rotary dials covering: shutter speed, aperture & ISO. The M5 comes close.

The two rotary controls on the top right hand side set the shutter speed and exposure. You can switch them around to suit your need (...I like the one by the shutter release button to be speed). 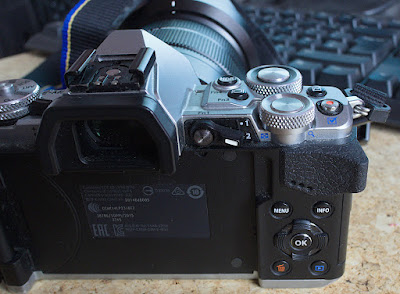 But with the Fn1 lever set to position 2, these two rotary controls become ISO and White Balance.

Whats not to like! With the M5 set to manual exposure, spot metering, and S-AF + MF set as focus mode, I just fiddle with the two rotary knobs and the Fn1 level for each shot...nice & simple.

I also like the option to disable the instant movie button, as I've managed to accidentally turn it on on my M10 a few times. 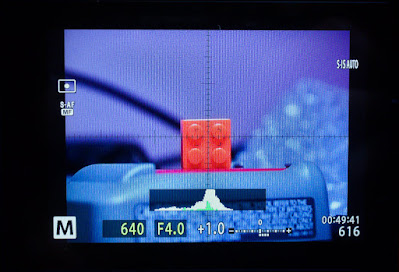 In photo taking mode, the display is very similar to my M10. I much prefer the histogram on the M5 & M10, with its broad x-axis, to the square shaped one on the Panasonic G9.

I adjust exposure for most shots by filling as much of the graph as possible while avoiding burning out peak whites, which is indicated by red markers on the right of the x-axis.

I haven't been able to get my hands on an M5 mk3, but by looking at the spec and the user manual, I've made a few deductions.

The M5 mk3 body is very slightly wider & higher than the mk2, and about 5mm thicker. Its lighter by 55g (about the same weight as the M10).

The M5 mk3 has a dedicated ISO button, which allows adjustment via either of the two rotary controls on top right.

Like my M10, the E5 mk3 has a Super Display which shows a grid view of options you may want to change quickly, rather than wading through the regular menu structure.

The M5 mk3 has phase detection auto focus, in addition to Contrast AF on the mk2, so should auto-focus better under certain conditions.

I'm not bothered about video and some of the other features that are of no benefit to me.

The Olympus OM-D E-M5 mk2 is a very nice camera. It suits my style of using a camera for manually exposed still photographs.

Having used both 16MP and 20MP cameras side-by-side for the last 5 or 6 years (Pentax dSLR K3 & K30, and now m43 Olympus & Panasonic) I can't say I'm that bothered which camera I pick up and use from a resolution point of view. Naturally, if you need to crop a small section out of an image, the higher resolution photo will be the better starting point. But a picture created from a drastic crop won't be a great picture either way (...better to re-shoot the picture if possible).

And in any case, the weakness in my photography tends to be the loose-nut attached to the shutter release.

Things I would miss:-