The Orion Laptop: another computer from Entroware

My laptop has had a hard life and needed to be replaced.

After reviewing the market for Linux laptops, I came back to Entroware.

So here is a short post on my new Orion laptop.

For the last 3+ years I've been using a Triton laptop which I bought from Entroware, a UK company specialising in the supply of Linux computers. Of course there is no such thing as a Linux computer, its just a computer that you hope will run Linux trouble-free, or at least as trouble-free as its possible for any complicated digital device to be.

At £385 the old Triton was pretty cheap, and its not been without its problems. Just over a year in, and somebody managed to break one of the mouse-pad buttons. I'm pretty sure Entroware would have supplied a new assembly, but that's not the Bodgit way, so I fixed it myself.

In my original review I suggested that the small battery could be a problem, and sure enough, it got very tired after 2 years of heavy use. It now only powers the laptop for about 5 minutes, which is long enough for me to carry it from one room to another before plugging it back in.

The case has cracked and the screen angle has to be carefully adjusted to stop it flickering. I suspect that I can fix this, as its probably due to the display connectors coming loose (I had the same problem with my earlier Asus laptop, which I fixed 3 years ago and its still working fine).

The final problem is the cable on the power adapter which has an intermittent connection, yet another sign that this baby has had a hard life.

At £640 the new Orion laptop is rather different, in that it looks a better build and I've never spent so much on a laptop. Like the Triton, its another machine made by Clevo: its the NL41CU with Intel core i3-10110U and 16GB RAM. I opted for the lowest spec processor because Linux is not very demanding. I went for 16GB RAM (rather than just 8GB) because I edit RAW photos quite a bit using Rawtherapee & Gimp.

I checked the Clevo website and their price for this model as per my configuration is 750euro (about £678 at the time) and they only seemed to be offering a US keyboard layout (...which would drive me crazy!). So I think it was a reasonable price from Entroware.

I selected Mate as the operation system, just to do initial laptop testing. I think Mate is a reasonable choice for any relatively non-tech person who wants to use Linux, but there were a couple of minor software glitches during the day that I played with it. 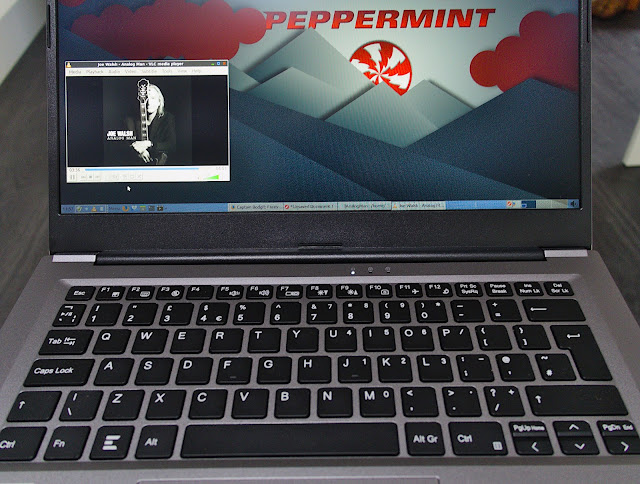 However, my current preferred operating system is Peppermint. I was rather hoping that I could install Peppermint 11, but as its still not out yet I created a memory stick install for Peppermint 10 and rebooted the laptop while jabbing the <F2> key like a monkey.

Once I'd attracted the attention of the system BIOS, I was able to boot from the memory stick and installation was straightforward, except where the installer asks if I want to keep old versions of some files or replace with new ones...I just have to bluff my way through that bit!

When complete I then go through adding applications that are not in the standard build (e.g. Thunderbird, Gimp & so on) but its important not to run Thunderbird until you have copied your personal files to the new system.

When I create a file backup to a USB backup drive I simply set the file manager to show hidden files and then copy everything under username to the backup drive. For example:

The contents of the backup folder are then copied to /home/steve on the new laptop, using merge where the folder names already exist.

If this was successful then when I open Thunderbird it should just work with my existing profile, show emails and calendar stuff.

While playing around with the original Mate install, I notice an Entroware program which led me to an Entroware repository. I'm not sure if these are needed, but one of the programs produces a diagnostics report file which may be handy if I get any problems in the future.

To install the repository I opened Synaptic, went to menu Settings > Repositories > Other Software and added this source APT line:-

After hitting close you have to press Reload in a dialogue box.

You then go to the Synaptic menu Edit > Reload Package Information. This should fix it, and you should now be able to search for: entroware

At the moment, I know nothing about the other programs in this repository except that the Wallpapers are probably ...well, wallpapers.

Any other info on these programs would be gratefully received!

The program entroware-power looks interesting, so I might have a play with that one.

What can I say ...its a 14" laptop with a nice hi-res display. It boots to the login dialogue in 20 seconds. The keyboard feels good, the box is light, and it has most of the connectors that you need ...except one!

Unfortunately it doesn't have a standard SD card socket. It does have a microSD card interface, but as most cameras still use regular SD cards its a bit of a pain ...pass me that funny USB card reader!