A Hedgehog in our Hog House

A hedgehog started to use our 'hog house' a few weeks ago.

So I put my PiCam at the entrance to monitor its comings and goings.

We bought a simple hog box kit in the summer of 2018, but up until this year, only the rats were showing any real interest. Across the entrance to the box I used a highly sophisticated monitoring device: a kebab stick!

This little stick is lightly pushed vertically into the ground, and if we notice it is at a funny angle, we investigate by lifting the lid on the box. 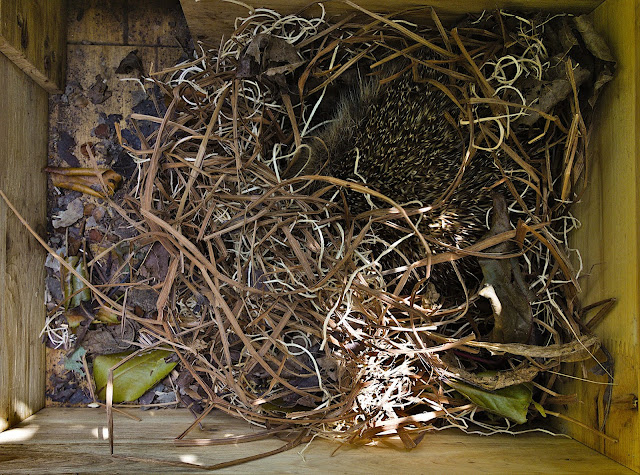 Towards the end of June 'the stick' indicated we had a visitor.

By the 30th June I had changed the camera module in my old PiCam for an iR type, added an iRed l.e.d. module, tinkered with the software, mounted it to a miniature tripod and started monitoring the box entrance.

The box is close enough to the garage for me to be able to power the PiCam from mains electricity, rather than using my usual 12V rechargeable batteries. 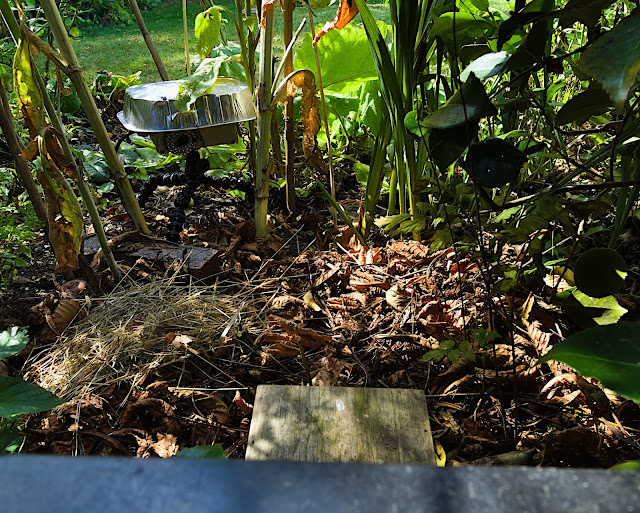 With the threat of rain, I had to add a simple rain cover: an aluminium food tray which had once contained Duck in Orange Sauce ...Hmmm..yummy!

Although we were hoping for the pitter-patter of tiny feet (i.e. hoglets) it looks to me that what we have here is a male hog using the place as a bachelor pad. I say this because it goes out some nights and does not return for 2 or 3 days.

For a while the box contained a minimal amount of nest material, but we did get over-excited when the hog spent 45 minutes gathering leaves and taking them into the nest. However, the hog continues to sleep occasionally elsewhere for whatever reason.

Sometimes it leaves the nest during daylight hours. This may be in the evening before sunset, or sometimes in the middle of the day, where he may be away for up to 30 minutes before returning. Unfortunately we would need blanket camera coverage of the garden to see where he was going and what he was doing during these short breaks. He may just be answering the call of nature, and then maybe getting distracted by the chance of a tasty beetle...who knows?

In order to minimise the risk of feeding the rats, we now watch the live video from PiCam from about an hour before it gets dark. When we see the hog leave the box, we rush out and put GoCat (Chicken flavour biscuits) in the hog feeder. 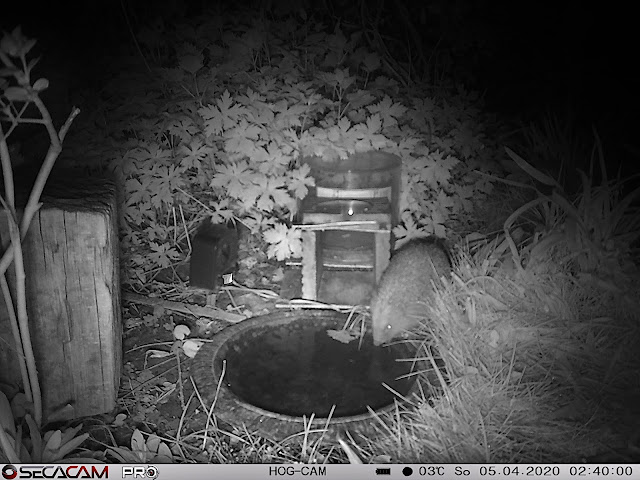 The 'all you can eat' Hog buffet

Although our garden is "hedgehog friendly" it is bound by a busy A road dual carriageway and a secondary road. So its a bit of a dead end for the hogs, in more ways than one. Despite this, the activity around our hog feeder recorded on our Secacam trail camera has revealed quite a few individuals visiting in a single evening (I think our record is 7 during the summer of 2019).

We recently popped a flyer through the letterbox of all houses on our side of the road leading back into the village and the response has been pretty good. Several households have responded by initially telling us that they regularly see one or two hogs in their garden.

And a few have started to provide shallow dishes of water for the hogs to safely drink.This is the #1 thing to do if you want to help your local hogs. 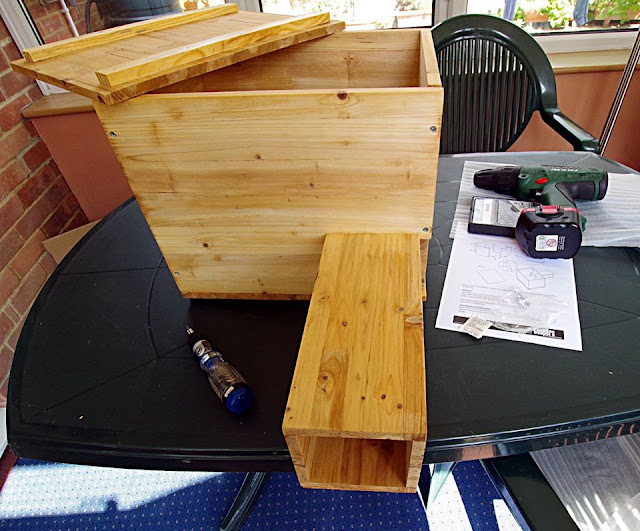 I keep referring to this hog as "he" but there is a piece of compelling evidence to the contrary that I must not ignore.

I was in the garden a few nights ago as 'our' hog exited the box. I watched in the twilight as a second, smaller hog joined ours. It started huffing & grunting and backing away in a jerky dance like movement as our hog approached. There appeared to be no reaction from our hog, and I was able to get very close without either of them appearing to notice me.

Once they moved into the bushes I completely lost my view of them, and so moved away back into the house.

What I had witnessed was a small male dancing around a larger female, which is typical courtship behaviour. So if there is no other explanation, then our hog is a female. And if they did successfully mate, it will only be 4-5weeks before we see the evidence in the form of hoglets!

But she really needs to get a wiggle on, because hoglets born in late September won't have much time to put on weight before the winter.