I was looking for an Instant Messaging app for my de-googled phone and found Conversations.

This sent me off down a series of rabbit holes looking for answers.

So I now know a lot more than I did a week ago.

XMPP (...you can call me Jabber) is an open communications protocol and is now over 20 years old. Its primary role is Instant Messaging, although the basic open standard is extensible, so lots of features have been added during its lifetime.

There are similarities between XMPP and email:-

You will find plenty of lists on the internet of free XMPP servers. However, like a lot of 'websites' that people set up during a period of feverish enthusiasm, more often than not they;

Some XMPP servers still work, but there may be no sign of recent activity on their website. Many are no longer allowing new users to open accounts. Then there is the question of server uptime and how many extensions the server supports.

I didn't know any of this initially, so I started by creating 2 new accounts on jabber.uk. I then installed Conversations on two phones (or Conv6ations as it rather annoyingly appears on the phone) and set about testing it.

As applications go, its pretty straightforward. One thing I did struggle with was changing the default avatar for one of my own choice. You basically tap on the existing avatar which takes you into an editor mode. 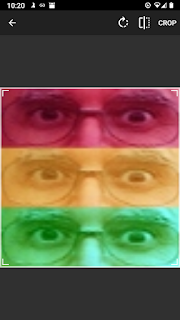 This screen has no "OK" or "DONE" button, so nothing seemed to work until I hit "CROP"...then bingo, my new avatar replaced the default.

Although my new IM solution was working great, I started to explore the option of audio/visual calls.

Initially these also tested out well when both phones were accessing the internet (and each other) via my home wifi, but as soon as I tried to connect via the mobile network GiffGaff, I hit a problem. The whole call/ring/answer process worked, but then I'd just get "Connecting..." for a few seconds, then "Unable to connect".

The only way to get help with Conversations is to enter a dark, smokey, chat room, which I did using Pidgin on my laptop. What I found was 430 guys sitting [mostly] in silence, waiting for something to happen. 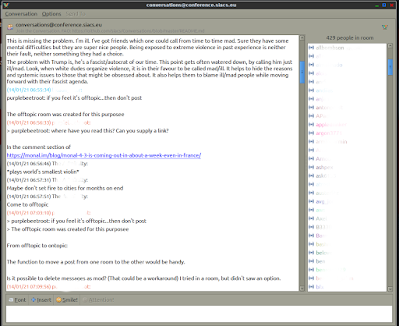 When not in silence, they either tried to answer my questions, or talked bollocks about stuff.

One very useful thing they did tell me was to check Conversations' server compliance tester. 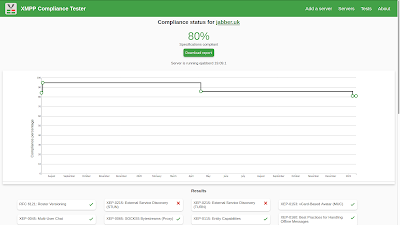 As you can see from the screenshot, this shows that my server is not 100% compliant. So I took my first steps into the world of STUN and TURN services, which apparently are very important for a/v calls, but they were clearly not up to scratch over at jabber.uk.

So now I thought I was getting somewhere. I used the Compliance Tester to check out other servers and created two accounts on hot-chilli.net. But retesting a/v calls gave me the same result.

It seems that the Compliance tester only confirms that the STUN & TURN services exist, not necessarily that they have been configured properly.

A lone voice on the hot-chilli chat room (which was even gloomier than the Conversations room) told me that a/v calls had been working a year or so ago. So I guess this may all come good at some point in the future.

I had one last attempt by creating two more accounts over at xmpp.is (which also shows up as 100% compliant) but I got the same a/v connection problem.

Along the way, several chat-room-vampires suggested that I should build my own server. No one was prepared to suggest a server where a/v was alive and well, although I suspect you could pay to use the Conversations server and it would probably work.

Despite the lack of a/v, I'm using XMPP instant chat a lot every day with a couple of family members.