Using a Wacom tablet on Linux

The CAD boys used graphics tablets back in the days when I still worked in industry.


Using a pen with a tablet provides a very precise input method for controlling a computer application.


But are these low cost Wacom tablets any good, and do they work on a Linux computer?

Once again I have been very lucky to receive a useful "tech" birthday gift, in this case a Wacom Intuos Draw graphics tablet with pen. 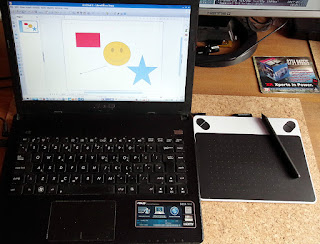 Like many companies providing computer peripherals, Wacom completely ignore Linux users. They advertise support for Windows and OS X, but no mention of Linux.

Fortunately, the Linux community have done all the hard work. So when you plug the Wacom into a computer with a recent Linux distribution, it just works. Even Raspbian supports the tablet when plugged into a Raspberry Pi.

so what's it for?


A graphics tablet is a computer input device. It provides the same functionality as a computer mouse, but instead of moving the mouse around, a pen is positioned over the tablet. A mouse gives you relative movement, whereas a tablet provides an absolute position.

Using the pen with a tablet is more precise than using a mouse or touch-pad. These devices are advertised for use with free-hand drawing applications, but are also a better choice than a mouse for photo-editing and CAD.

how do you use it?

Touching the tablet with the pen, and then moving the pen, is the same as left-click and moving a mouse; it either highlights an area or draws a line, depending upon the application.

Touching the tablet with your hand does not move the pointer, so you can rest the palm of your hand on this tablet when using the pen.

The pen has 2 buttons which equate to the right and centre mouse buttons.

The tablet has a white led which goes from dim to bright when the pen is brought within range. There are also 4 tablet buttons which can be programmed for certain tasks, but I have not tried to use these.

when to use it


I primarily use my tablet when editing photos with The Gimp, or when creating drawings with either LibreCAD or LibreOffice Draw. 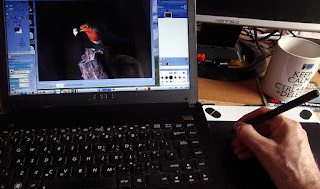 However, the touch-pad on my Asus Lubuntu laptop is a bit twichy. So whenever using my laptop at my desk, if there is space for the Wacom, then I use it in preference to the touch-pad...I'm using it now, for this post! 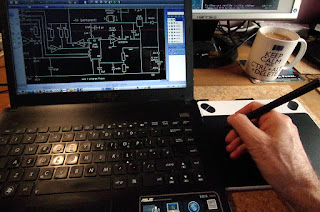 If you are an artist, you can use the pen and tablet for free-hand drawing on Linux with programs like Gimp, mtPaint, myPaint & so on.

I've been using the pen and tablet for about 4 weeks, and I love it!

Having used a mouse or touch-pad for so long, I frequently try to "scoot" the pointer across the screen as I would with a mouse. But this does not work with the pen as (already mentioned) the pen/tablet position is absolute. It is just a case of re-conditioning my brain!
Posted by SteveDee at 17:56