I must have been using Gambas for small projects since I fully switched to Linux for my home computing needs almost 10 years ago.


Gambas was a natural choice for me as I'd spent several years in industry using Visual Basic, Delphi and Turbo Pascal.


But up until quite recently, it had not occurred to me that there might be some benefit in using Gambas for command-line programming.


a word about event-driven programming


One thing these "visual" languages have in common, is their support for event-driven programming.

While you can write event-driven applications in most software languages, all "visual" languages (like VB, Delphi & Gambas) have structures and components which take care of some of the details for you.

For example, when you drag a button onto a Form in the visual designer, an instance of the button class is created and some skeleton code created.

All you then have to do is write the code to be executed when the user clicks on your button. This means that you create a program without a program loop. There still is a loop, but its hidden, and not your responsibility.

Event driven programs respond quickly to any events raised, and in any order. The language and development environment are designed such that you can quickly create an application with windows, buttons, text boxes and other controls like timers.


This is where many people start out programming. You write a program, often using just a text editor, maybe starting with "hello world!"

These programs run by entering a terminal command, and any output is also displayed on the terminal.

...and would be run from the terminal using the command:-

...and run using the command:-

In both examples, the program runs around a loop outputting "Hello world!" every 5 seconds until you stop it.

Obviously run-time support is required for each language (i.e. Python 3.x and Gambas3). The Python example runs from the text (source) file via the Python3 interpretor. 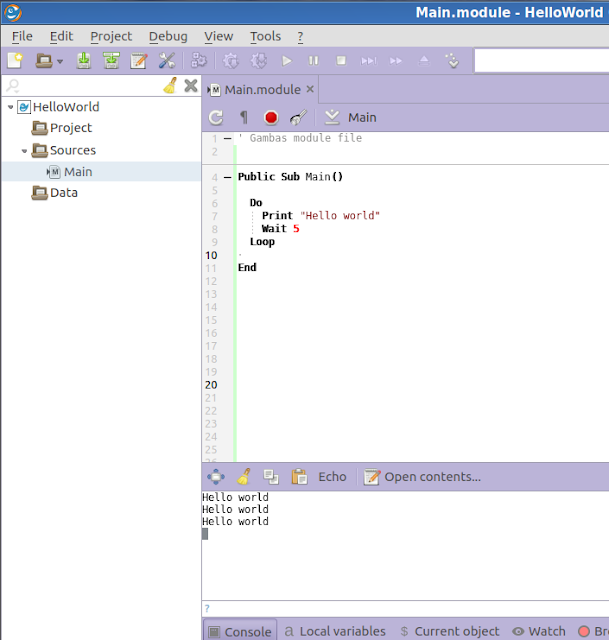 The Gambas example will run in the Gambas IDE and/or from the executable created by the IDE.

I'm not planning on getting into a discussion on which language is best. As hobbyists, we have the luxury of being able to pick and use whatever tools we fancy. This post just happens to be about Gambas.


To stop a Gambas command-line program we can just use the "Quit" instruction.


In fact most things you can do for GUI programing, you can still do with command-line programming, except you won't have a GUI interface. However, this also means you don't have to run a desktop GUI on your system.


Programming for the gpio on the Pi is the same for command-line programming as it is for GUI applications, using either wiringPi or the pigio libraries. For example, with wiringPi:-


Lets take a more complex example than our initial "Hello world!" program, where we want to output additional strings at different times.

All we have here is a program that runs a continuous loop printing messages at 5, 16 and 22 second intervals. As the program complexity increases, so does the size of the loop.

Another approach is to use event timers (just like the timer in the graphical environment) to raise events when each time interval has expired.

Although there are more lines of code in this version, I prefer it, as it looks clearer to me. I guess I've got so used to event timers, I'd be lost without them!

I also think Gambas is overlooked by many people (including educators) who are looking for a suitable BASIC environment with a good IDE for the Raspberry Pi.
Posted by SteveDee at 13:23