Fixing my Pentax K-30 exposure problem: #3 one problem leads to another!

Having reassembled my K-30 with the replacement solenoid, it was time to test it.


Unfortunately it failed the test, with all photos underexposed.


I think my problem was due to a truly stupid mistake.

While performing this unnecessary procedure, a small blob of paint dripped onto the solenoid. This was mistake #1.

I then thought I could simply mop it up with a cotton bud (mistake #2), and convinced myself that none had gone inside the solenoid coil former (mistake #3), so reassembled the camera (mistake #4).

Having verified that the aperture mechanism was now completely non-functional, I stripped the camera down once again. The solenoid looked in a sorry state... 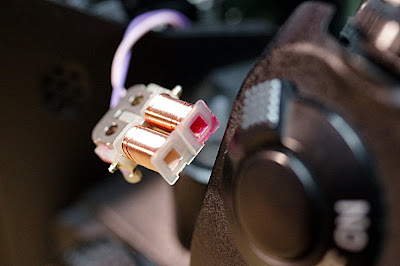 In a gravity defying stunt, the paint had managed to climb vertically up into the solenoid coil former.

I just had to un-solder the wires and clean it up.


While it was out of circuit, I did a few comparisons between the two components. 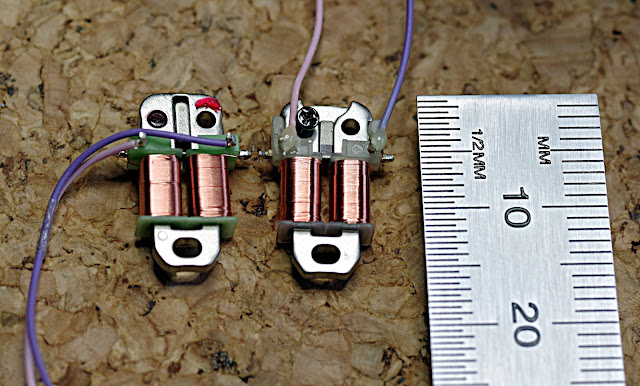 One thing I had noticed on other photos of the green solenoid (by other Pentax owners with the same problems) is that the two coils are not parallel. There is quite a noticeable taper towards the wire-termination end.

The coil resistance for both solenoids measured 30 Ohms.

I also carried out a very crude test using brass kitchen weights and lengths of cotton thread. By attaching thread at one end to the solenoid and wrapping the other end around weights sitting on our kitchen counter, I hoped to get some idea of the break-away force/weight required for each solenoid.

For the white solenoid, an 8oz weight was just too much for it and the horse shoe was puled out before the weight was fully off the deck.

For the green solenoid, 8 and 3 quarter ounces was just too much to lift.

Don't get too excited by these results. I only had quarter ounce increments available, so when I say that the difference between the two components was probably 20 to 30 grams, this can only be taken as a rough estimate. However, it shows that the green solenoid required more energy to operate ...but probably only about 5% more.


Having refitted the 'good' solenoid (minus all traces of paint) I also wanted to take a few electrical measurements. So while the camera was still in a state of partial undress, I refitted the battery (this may have been mistake #5). In its normal state, there is no d.c. voltage across the solenoid. It was also very tricky trying to detect an operating pulse using my Hantek scope module + laptop.

But I found that if I set the aperture wide open and the shutter to 1 or 2 seconds, I could see the solenoid operate when I pressed the shutter release...

...however, I could not see it operate at any other aperture settings. I repeated this on 3 lenses.

It wasn't long before I noticed that the mirror went "FLAP!" or "FLAPPERTY-FLAP!" a few times while I wasn't even touching the camera. By this time the camera had been turned on & off a few times, rolled over, and had lenses attached & removed.

Each time I needed to turn the camera on or off I had to press the top cover back over the camera so the switch would contact the slider... 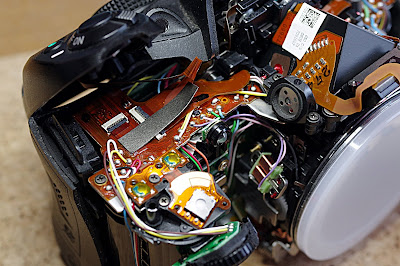 ...which causes some stress to the flexible connections between the two. Although I cant see any physical signs of damage, something detrimental seems to have happened.

Even with the camera fully re-assembled, it now randomly operates the mirror. It happens whether I'm holding it or whether its just sitting on my desk. It does not take a photo, so its not the clunk of the mirror and shutter. Sometimes it gets so upset that it freezes, and I have to take the battery out to kill it.

Exposure seems to be OK in 'live view' mode, but via the view finder, the meter shows underexposure when exposure is correct (or to put it another way, it over exposes if I manually adjust to centre-meter exposure).

A new problem I've only just noticed (as I'm writing this) is that if I half press the shutter release in auto focus mode, the motor sometimes just 'whurrs' but it does not focus.


While it is possible that it has been zapped with static, it seems unlikely. On the day it started doing this, the humidity in my man-cave was quite high (low 70s). I wonder if one or more connections are now intermittent or open circuit. So I plan to open the camera one more time and give it one last chance.

While researching the 'flapperty-flap' mirror problem, I was surprised to find that this is another issue that is far from unique. The most commonly reported cameras with these kind of problems seem to be K-3, K-5 & K-50. The comprehensive report by Amy Medina on her K-3 (actually more than one) leads me to wonder whether Ricoh fixed this problem in the K-3 II and the K-5 II but could not afford to do a product recall on all those earlier cameras that they had produced.

Although our K-3 is still running after over 18,000 shutter operations, it has been necessary in the past to remove the battery when the camera 'freezes'. I've loved using my K-30 over the last 6 years and its been relatively trouble free. But he aperture problems were not due to mishandling or me taking the camera apart, although the subsequent issues may or may not be down to me.

Either way, whether I eventually fix my Pentax K-30 or not, I wont be buying any more Ricoh cameras (...at least not in this lifetime).