The Stirling engine is not new.

Over 200 years ago John Stirling was the first person to build a working hot air engine.

So what better Christmas present to buy myself than a kit of parts.

While I have no problems visualising how an internal combustion engine works, I do struggle a bit with the operation of a heat engine. 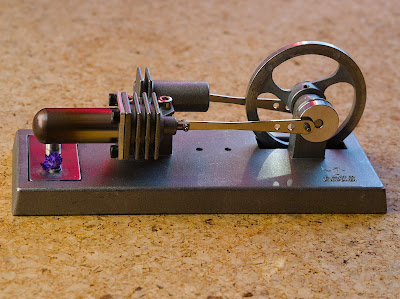 My Stirling Engine is the two cylinder variety (also known as an alpha-Stirling engine) so basically, the air in a heated chamber expands, pushing out the hot-cylinder piston. Hot air passes to a second cylinder, it is rapidly cooled, creating a vacuum which draws the second piston into the cold-cylinder.

I bought my kit from Amazon, where you will find several identical kits from a number of suppliers. The kit contains more bits than you need, plus 3 Allen keys to suit the various screw sizes.

I would say you need 3 personal attributes to be able to complete this kit; good eyesight, manual dexterity and a good dose of mechanical aptitude.

There are about 35 parts, and the smallest are little transparent plastic tubes, less than 2mm in all directions. So don't sneeze or allow these bits to drop onto the floor...you will never find them. Fortunately (if you do) they did include some spares and a length of tubing, which could be cut into small rings if you need more.

After adding some methylated Spirit to the sump via the handy little filler bottle supplied, plus a couple of drips on the exposed wick, I was almost ready to fire her up! I just waited a minute or two to be sure the wick was fully saturated (you don't want to burn the wick, you want to burn the meths).

After putting a match to the burner I waited about 20 seconds before giving the fly-wheel a spin. The engine didn't start and it felt too tight in places to ever start. I also noticed that it was a bit happier if I gave the flywheel a spin in the other direction (away from me).

The two con-rods (or whatever you call them on a Stirling Engine) are coupled to the flywheel and drive wheel, offset by 90 degrees. While the axle on the flywheel side only has one flat where you can tighten the grub screw, the drive pulley has two, 180 degrees apart. So I slackened off the drive pulley and reset the heated cylinder con-rod to be 90 degrees ahead of the other (cold-piston) con-rod.

With the offset like this, I can spin the flywheel down, towards me to start the engine.

Now that my Stirling engine is running pretty sweet, I want to work out how fast its going and how much power it can generate.