I bought this LCD about 10 months ago for £35, so its about time I did something with it!


I've half an idea that I could use it in the kitchen to monitor the video feeds from my bird boxes.


The first problem is how to mount it into a panel, as the LCD module does not have any mounting points or lugs.

I did come up with a mounting arrangement last summer. I used my Dremel + router bit + guide to cut an aperture in a black acrylic panel. But the edges didn't turn out very straight, so all the bits have just been sitting idle in the cupboard ever since. 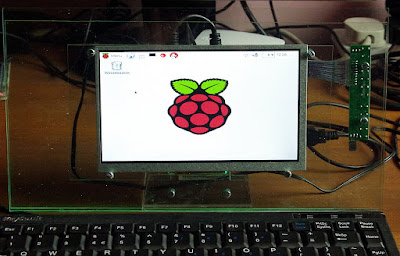 A third sheet acts as a base for the display's main pcb and for the Raspberry Pi. There is also a small pcb with push-buttons for basic display functions (e.g. on/off and display menu) which I've mounted on the second panel facing backwards. 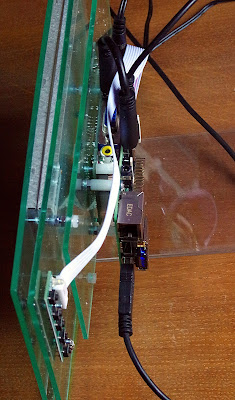 To get this assembly to stand up and lean back at a slight angle, I found an old plastic photo mount. 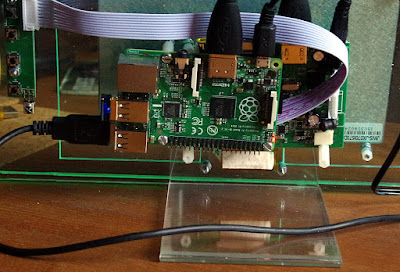 I just had to cut about 12mm off the short section and screw it to the second panel.


The display board is powered from a 12V dc module, while the Pi needs 5Volts. When I have more time I will make a little daughter-board with a 78B5 switch-mode 5Volt device and mount this to the Pi gpio connector. This will allow me to run the system from a single 12V power supply.

I have connected the Pi to the display using a very short HDMI cable, which I probably picked up via Amazon.

Once the supplies are connected, the Pi boots and the familiar Pi desktop is displayed, but not full screen. You just need to go into /boot/config.txt (as root) and un-comment (i.e. remove the #) from the line:-

What possible use would you have for a 7inch display?


This little Tontec is surprisingly clear, and has a good viewing angle (i.e. you don't have to view at 90 degrees to its surface). So it can sit on the window ledge in our kitchen and monitor two of our bird box video feeds.

When we get bored with that, we can check the News or run BlissFlixx and watch a Ted Talk or something! 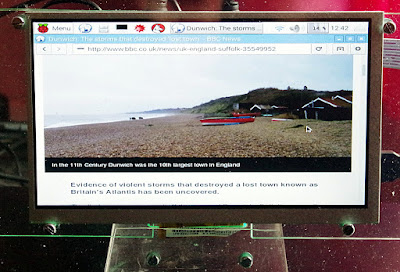