We fixed our second Pi-powered bird box to the Canadian Maple in our garden yesterday afternoon.

In the first few hours this morning, bathed in glorious winter sunshine, we had plenty of interest from a blue tit or two.


So this is a very promising start to the 2016 nest box season.

The PicaxePi powered box was deployed two weeks ago, and was basically the 2015 design with a few modifications. This second box is the 2014 design, which is Pi powered but controlled via an NE555 timer. The only mod this year was to remove the supply fuse, fit a 1N4000 series supply reversal protection diode, and replace the white 2 core battery cable with a 5m length of black 2 core cable.

It is an ugly looking box with an embarrassingly badly made roof and floor. But has been so successful at attracting occupants for the last 5 or 6 years that I dare not make any substantial changes.

This box was made with a 32mm entrance hole, in the wild hope of attracting a nuthatch or two. However, in the past it has provided a home for blue tits and great tits. Blue tits only need a 25mm entrance hole, so you might have expected them to avoid this box, as there is clearly a security risk from bigger birds. 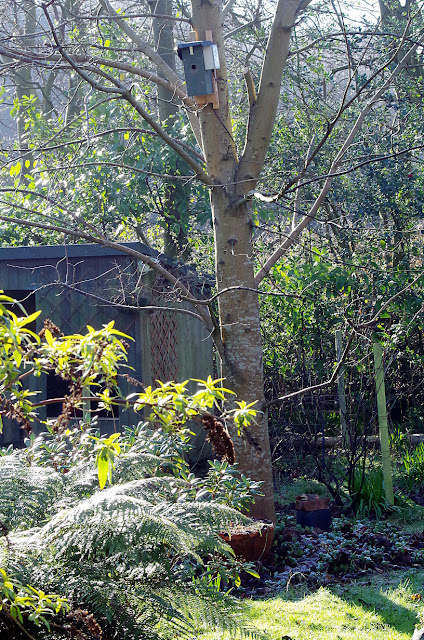 This year I've attached it to our Canadian Maple at about 3 metres above ground level. Although this is often quoted as the required height, up to now my "entrance hole" type boxes have only been attached to man-made structures at a height barely higher than 2 metres.

It is also further away from the house than any of my camera-equipped boxes, with the exception of the robin box fitted last year inside our garden shed. At just over 23 metres from the birdbox wifi router, I wasn't sure how good the wifi signal would be.


Running my scanner app on the box shows that I get a good 100% readability signal, and currently there are no competing wifi nodes on channel 6, although this can change from week to week.

And a check on the signal data rate shows all is well at 72Mbps. 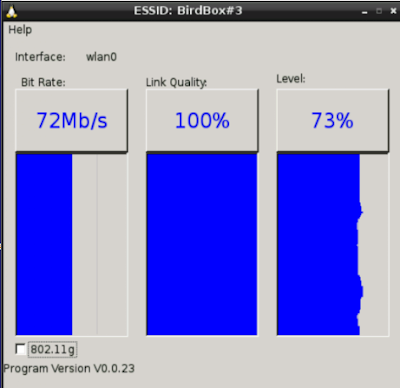 The single circular windows is also providing plenty of illumination for day-time photography.


Our resident male was showing a female the open fronted box now completely hidden by ivy, just outside our garage. They had a good look around but there are no clear signs of any nest building. This box has two old-school TV/analogue cameras linked up to a portable tv in the garage.

We still have last years open-fronted robin box screwed to the inside of our shed, and I can deploy my portable PiCam to monitor this nest if the need arises. I just need a G-clamp to fix it to the rafters.
Posted by SteveDee at 15:04