I dragged myself out of bed just after 7am to make the tea, and turn on the bird box monitor.


I was greeted by a blank screen, meaning both boxes were off.


But by the time I'd emptied the dishwasher, a female eSpeak voice proudly announced "bird box...on".

The monitor was now showing video for the 2014 box (i.e. last years design) but as I'd covered the skylight the day before, the video just consisted of a black rectangle with white text.

Reaching for the binoculars I could see a blue tit hanging from the front of the box. I'd normally expect to see 2 birds together, but this one appeared to be on its own. 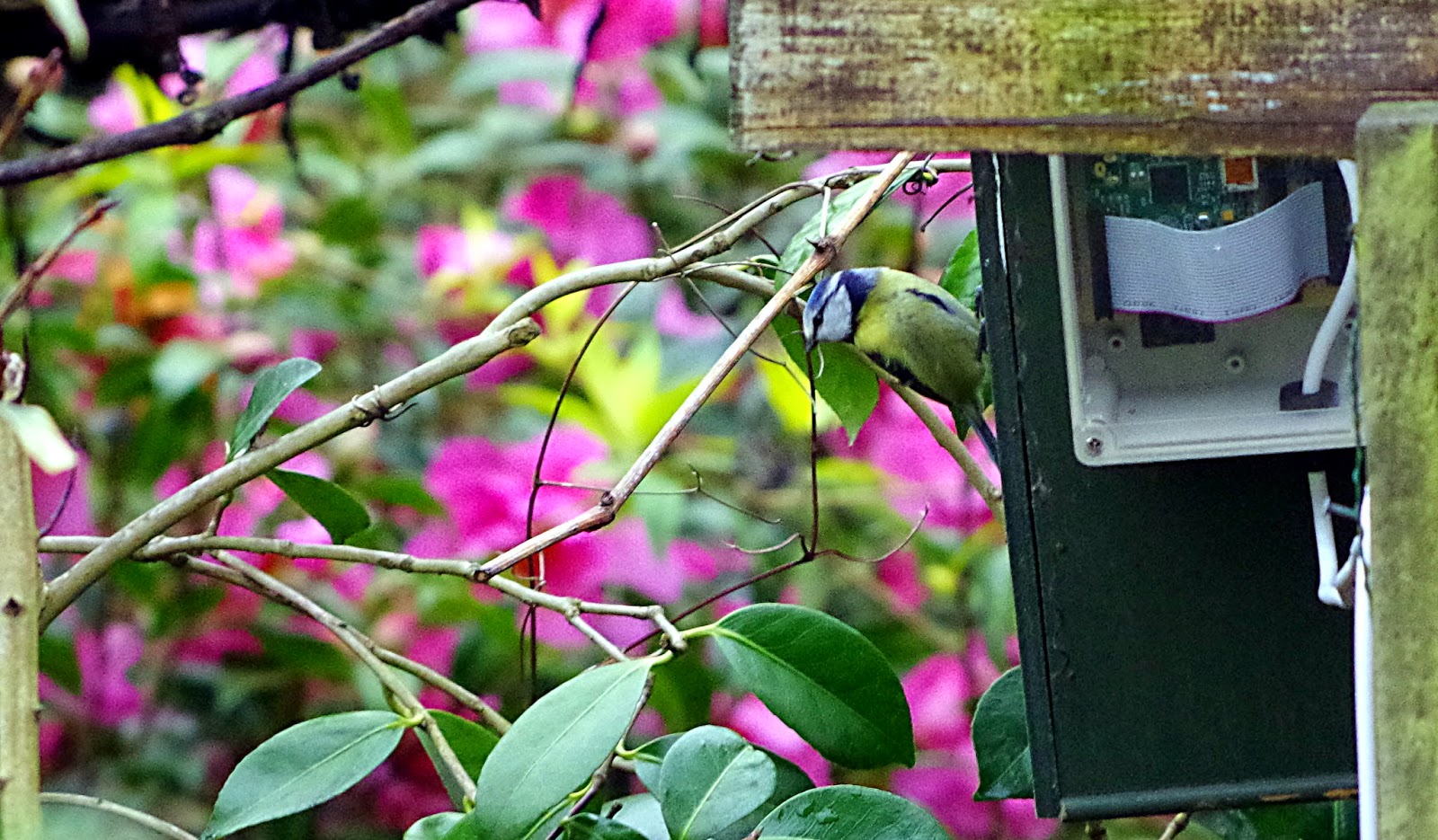 After a couple of minutes the bird flew off, but then returned again a few moments later, to continue hanging on the front, poking its head inside, and triggering the Raspberry Pi powered system. He was still alone, but having moved away once more he/she returned a few minutes later with a mate.

Soon the pair were all over the box, inside and out, and our tea was getting cold! 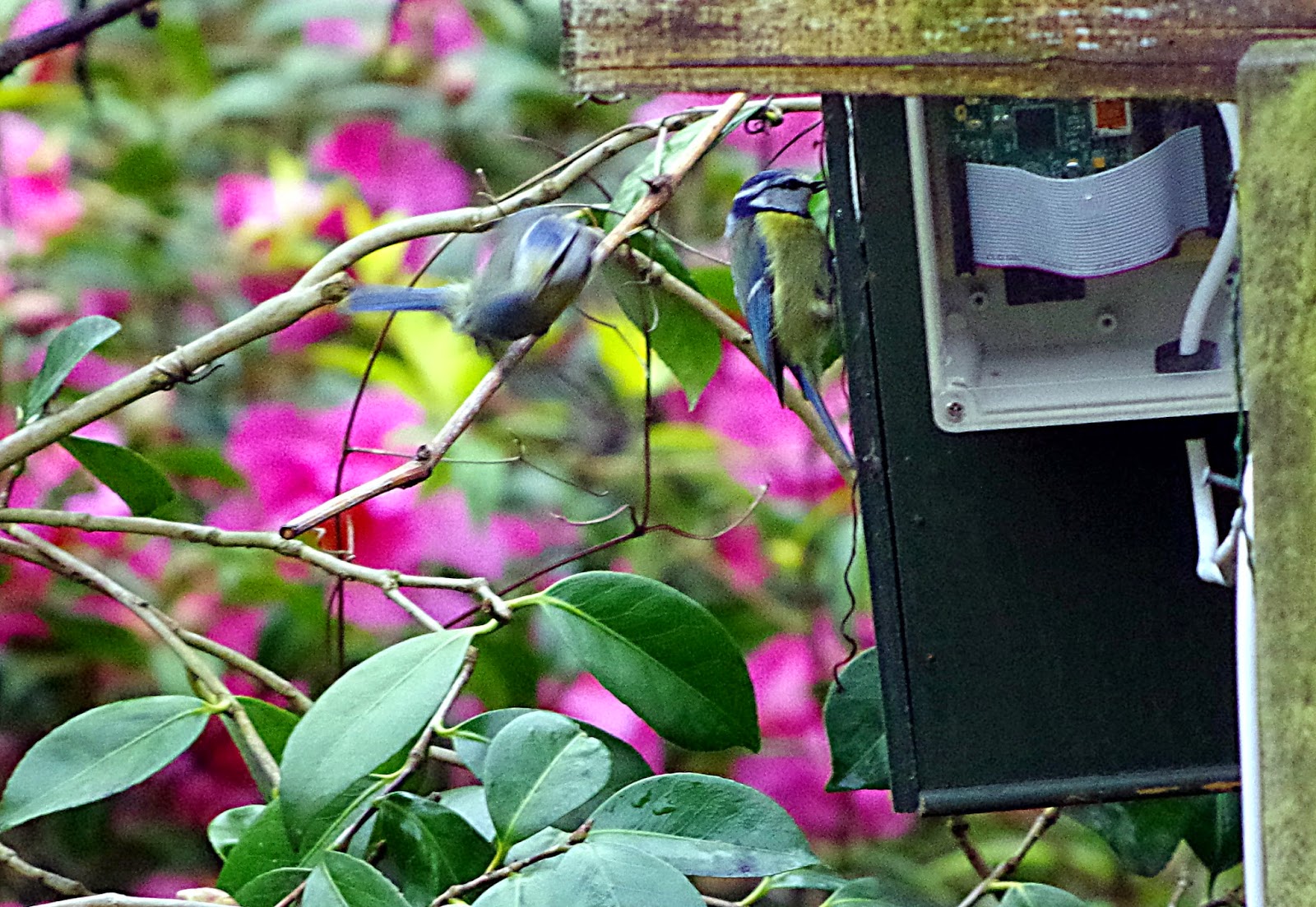 They checked out the roof, the sides, the back and the ABS box containing the Raspberry Pi stuff. They kept flying away briefly, and then coming back.

All this activity seemed to attract the attention of a pair of great tits, who perched a few feet away. But the blue tit male was so pumped up he launched a few flying attacks on the larger pair, and eventually they moved away.

They also flew over to the 2015 box, again checking the inside and outside, checking the view and the surroundings. But they were soon back to the older box, and by around 10am they had started bringing stuff into the nest.

By midday they had tripped the sensor over 450 times and had accumulated a few blades of, what look like, dead grass.

So why the sudden change in fortune?


It is very tempting to assume that yesterdays move to cover the 50mm windows and block out most of the light has led to this sudden change of fortune.

We have gone through a week where the activity around this box has dropped down to almost nothing, and now, suddenly we have a pair of blue tits building a nest!

I guess you would need a large, private woodland area with a variety of box designs positioned 50m apart, before you could determine good and bad bird box design practice. But in future, I will probably keep the box windows covered, and the box lights off until I can see that any residents are well settled in.

Who are these guys anyway?


Given that I saw a blue tit collecting dog hair a little while ago, and that the only other nesting sight in that area (in the direction of flight) is probably 12-15m away from the 2014 box, why haven't these close neighbours been hassling the newcomers?

There seem to be only 3 possibilities; either (a)both pairs are tolerating each other (unlikely) or (b)the bird I saw with the dog hair was taking it somewhere else, or (c)these are the same birds that have already built a nest in the other box.

It would be amazing if it was (c).

Also, why was a blue tit looking into this box without its mate in tow? This seems strange behaviour to me, given how close we are to the nesting phase, as you generally see two birds together when viewing potential homes. And why the sudden explosion of interest, given that the box had been hanging there for weeks?

Whoever they are, let's hope we don't lose them!