The Replicator is a minimal design, with a simple user interface consisting of a 4 line, "vending machine" LCD and a 5 button cluster (a central button surrounded by four arrow keys).

At £1700 the MakerBot dual-nozzle Replicator must be considered an entry-level machine.

There are no guards or safety interlocks on this machine, which reaches temperatures of over 200'C, and could crush the fingers of anyone getting in its way.
Don't bother looking for the ce mark. Clearly it doesn't meet EU Health & Safety requirements, or comply with the relevant European Directives, and probably violates your Human Rights as soon as you let it out of its box ..... 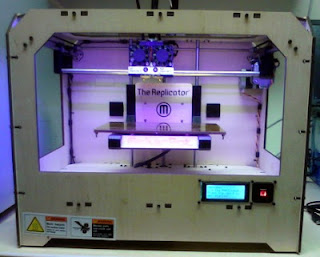 This particular model includes a dual-nozzle carriage which the makers describe as a "steptruder". The raw material comprises two 1kg reels of ABS, one black the other white, which look just like plastic coated wire.

After unpacking the printer and finding a selection of parts, materials and Allen keys, final assembly includes attaching the steptruder, the product guides, product spools, ABS reels and power supply.

Having inserted the SD card and switched the power on, the next job was to level the platform, which is supported by 4 spring-loaded screws. You are guided through this process via the small LCD screen, as the steptruder moves to different positions above the platform.

The idea is to set the assembly by adjusting 4 thumb nuts, so that you can just slide a fag paper between each nozzle and the platform. I went around this process three or four times before I was happy with the levelling.

The final step was to feed the ABS through the product guides and push down firmly into the stepstruder.

The ABS is gripped by some kind of motor, but I had to apply a lot of pressure to get the first reel to draw through (maybe I should have used a sharp pair of scissors to make a clean angled cut, rather than using my teeth!).

Eventually the material flows out from the nozzle like a fine thread. The second reel seemed to feed through and pick-up much easier than the first.

...or Watch The Video

This helpful young man takes you through the initial setup: http://www.youtube.com/watch?v=m4Odom-XyBk

What's on the SD Card?

The SD card contains a number of example models/products which can be selected via the LCD interface. Once you've chosen a design, the print process runs by initially heating the steptruder and platform.

According to the display, the platform runs at 100'C while the nozzles are heated to about 220'C. Once the target temperatures are reached, printing automatically commences with the construction of a "raft" on which the items are eventually constructed.

The printer makes a noise like an old x-y plotter, and occasionally judders violently, rather like our washing machine, but not quite as loud.

The first project I selected turned out to be two cartoon sharks, one black and the other white, each around 50mm x 20mm x 12mm high. These took around 45 minutes to complete.

From the top and the sides, the sharks looked quite solid and well finished. But the underside revealed a string like finish, and it was possible to pull on a thread and unravel a few inches of it. I did wonder whether printing two objects side-by-side resulted in the ABS cooling too much between applications (i.e. as the carriage moves alternately between the two sharks) resulting in poor bonding.

However, my second project (a single spiral pot) was much more successful. 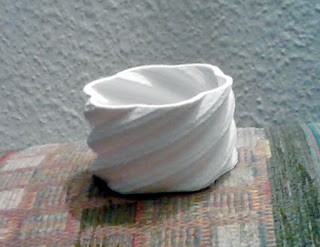 This is around 30mm high x 50mm diameter, with a "screw-thread" appearance. The inside of the base has a really good finish, and while you can see the ABS threads on the underside of the base, these are tightly bound together, so its not possible to unpick them.

I was hoping to be able to make plastic parts for various broken things around the house (e.g. plastic clips, spacers, bits for the Dyson), but I had my doubts due to the quality of the sharks.

However, I've just discovered this video which gives some tips on improving your printed components: http://www.youtube.com/watch?NR=1&feature=endscreen&v=r3nJbU9OInk so its clear I need to do more research on how to get the most out of this little machine.

I would expect these devices to be half the price and twice as good in 2 years time, and this rate of progress it likely to continue well into the future.

So maybe I'll place my order in 5 or 6 years from now, when the cost is less than £300. In the meantime, I'm more than happy to play with this one.

Thank goodness they didn't put safety guards and electrical interlocks on the Replicator, as this would have made it 4 or 5 times more expensive, and I'd have had to wait until 2016 to see one!

The MakerBot Replicator is certainly more than a toy, its the start of a revolution!