Actually, strike out the word "play" from above.

By watching my own kids, and now my grand-children, I've come to the conclusion that very young children are pre-programmed to EXPLORE the world via touch, taste, smell and hearing, while play and learning are just by-products.

Children, especially under 3 year olds, just soak up information like a dry sponge in a shower.


This post presents some of my ideas on creating a simple computer based "toy" to engage very young children, which will hopefully develop as they do.

If you have a home server or just a box that is left on most of the time, you may want to add an external drive and share the contents over the network.


This post is written for Lubuntu using an attached memory stick, but you should be able to follow this procedure for other Linux distros.


Lubuntu is a light-weight Linux distro, so you may find there are packages missing which are required for proper network operation. Consequently, I suggest you set your Lubuntu box for networking using the method I've detailed here.

Clonezilla, its not really that scary!

Whether you are running Linux or Windows, its a good idea to clone your system before upgrading your system software, or doing anything that may brick your system.

Its easy to create a clone of your current system which you can then use to re-image your computer, in the event of a problem.


However, it should go without saying that re-imaging is a destructive process. The whole computer hard drive is going to be re-written when you restore an image.

Having upgraded the Replicator's firmware, I was able to run a couple of test prints using acceleration.


This allowed me to print a TreeFrog in under 30 minutes.

What level of print quality can you expect from your new MakerBot Replicator?

Here are a few illustrations which I hope might help show the sort of results you can expect from this model of 3D printer.


...Or maybe you get better results, in which case, I have a problem!

Having levelled the Replicator platform and left all other settings at their default values (e.g. nozzle & platform temperatures) I selected the "whistle" from  the ReplicatorG software example list as a test piece.

By making the transition from Gambas 2 to Gambas 3, I've been able to increase the functionality of my Photo Viewer application, and make a few improvements along the way.

A new Gambas component has allowed me to add image histograms, rotation and normalisation to my project.


This new component is called gb.image.effect, and although it includes methods to despeckle, emboss, invert, oil-paint and solarize an image, I've only made use of a couple of the available methods.

Gambas is no shrimp

It may mean "prawn" in Spanish, but in the world of computing, Gambas is a visual programming language for Linux.

The Gambas application is an integrated development environment (IDE) which not only allows you to create, edit, run and debug your software, but also create executables (programs) and package them for distribution and deployment to other Linux computers.

This post does not cover the Gambas language in any detail, its more of an over-view which takes you through the whole process of creating an application, from writing a very simple program to creating a deployment package.

Gambas is more than just a language, it is also a rapid application development system, making it an ideal starting point for those wishing to learn programming or for programmers taking their first steps with Linux...

Giving Your Computer A Voice

I've found it very helpful in a few cases to add audible alarms to monitoring functions. For example, if you work in a network support environment and a server goes down, you need to know about it straight away.......preferably before your phone goes into melt-down!

By using text-to-speech, you can monitor several aspects of your working environment without having to continually check display screens.


I recommend eSpeak, which is a compact, cross-platform, open source software, speech synthesiser. Although the sound is not as natural as that produced by a system based upon human recordings, its very small size makes it a good choice for small devices, the Raspberry Pi and for applications producing announcements.

Networking: With Lubuntu, Win7 and the Raspberry Pi

Setting up a home peer-to-peer network can be challenging, and for machines with a variety of operating systems, can be even more tricky.

The three examples given may also help with other version of Linux & Windows.

When you make the transition from "point and shoot" to SLR photography, there is one very important subject you really need to get to grips with:-

Using an SLR camera in "manual mode" puts you in total control, not only of composition and focus, but also exposure.


When you take a photo, you allow light into your camera. Assuming you are using a "digital" camera, the light reaches a "photo-sensitive sensor" which produces an electrical output, and ultimately this is processed into a picture. If this picture is correctly "exposed" it will not be too dark or too light.

"So what's the problem..." I hear you say,  "...if its too dark or light I can just use the Gimp or PaintShop Pro to adjust the brightness?"

The problem is that you will lose detail if your initial photo is too dark or too light. Adjusting the brightness will not recover that lost detail.

How to diag Windows/computer problems with a LiveCD

You have a problem with your Windows computer and wonder whether its hardware or software. You've tried all the obvious stuff, so what do you do next?


Well before you invest in more RAM, a new hard disk, or take your computer to your local friendly repair man, there is one more thing you can try.

Does the world need yet another Photo Viewer application?

I doubt it. But I needed something which would help with my photographic work-flow, so I wrote my own.


With three keen SLR camera users in our house, I noticed that at least two of us were following a similar process. Once we had transferred our photos to our Linux powered laptops, we would:-

So I set about making a new Photo Viewer application using my language of choice: Gambas 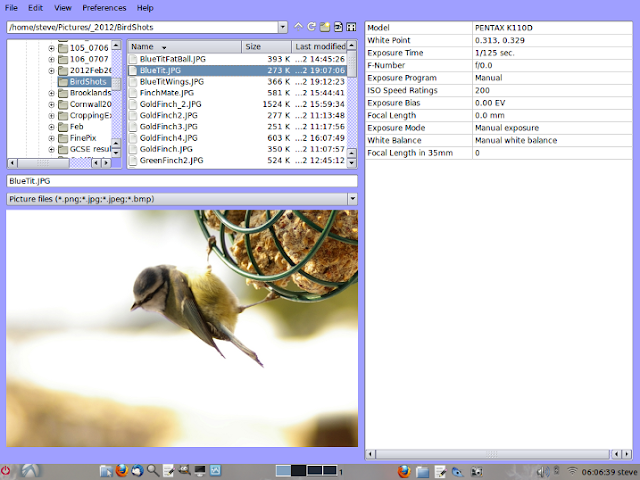 If you have no interest in your Lubuntu computer beyond using it for regular tasks (e.g. email, web, photo-editing) then you can stick to using graphical user applications that you pick from the system menu. That's fine! There is really no point in making your life more difficult than it is already!

However, if you want to look a little deeper into the workings of your system, there is no better place to start than at the terminal.


Why on earth would you need to use low level commands like "cd", "ls" and "mv" if you have a very capable GUI file manager, such as PCManFM?

Well, most of the time you would try to steer clear of "the dark side" and use a GUI app. But what if your system is broke and it wont boot to the desktop? You might be able to edit files and bring the poor old dear back to life via the command line interface, if only you knew how!

What is Lubuntu and why would I use it?

You are probably reading this on a netbook or an iPad, or maybe a smart phone, or maybe one of dozens of other devices. All of these devices have 2 common attributes; they include "hardware" and "software".

Software, of course, is invisible but you can see the effects of it on your hardware. For example; it lights up the display and responds when you click an icon (sometimes). So in order to get your cold hardware to do something, you need software.

Disaster struck in the Bodgit house last week when Lady Bodgit announced that the Magimix had stopped mixing. I say "disaster" because without it, production of LB's delicious fruit cake came to a halt.

I'd noticed that the rotating blade had been difficult to remove the last few times that the Magimix had seen action, and had advised the use of Extra Virgin Olive Oil to free it from the rather misshaped motor spindle.

However, the spindle was now spinning, but the blade was not. So it was beginning to look like a new (and expensive) mixer was required.