1) Getting your prints to stick to the bed

2) Getting your prints off the bed

As mentioned in my earlier 3D printing post 3D Printing: I'm back in the saddle! there are two things to note before you read this post:-

As mentioned in my previous post, my first few prints were disasters. But once I'd got the bed setting right and started to use meths to clean the bed, it all came good.

Edit: since writing this post, I've switched from cleaning the bed with meths to using IPA (99.9% Isopropyl Alcohol). Unlike meths, IPA does not leave a residue.

I then printed over 40 objects using two different reels of filament (one white, the other red) with all items sticking to the bed nicely.

I should mention that I also set the Build Plate Adhesion settings in Cura to "Brim" with an 8mm brim width for most of these prints. For a few prints I used "Raft" and added supports for over-hanging parts of the objects (e.g. Unicorns, dinosaurs & so on).

My understanding of the Build Plate Adhesion settings:-

Skirt: this just seems to lay down some PLA around were the object will be printed. It gives you a visual indication of how well the printer is printing, but does not help to stick the actually printed object.

Brim: this lays down a layer where the object will be printed, and extends beyond the objects footprint by the entered brim width.

Raft: this prints a low density "raft" of material which gives your object the best chance of survival when it comes to both staying on the bed and being removed when the print is complete. The raft is generally easy to remove because it is low density when compared to the printed object.

I don't have a clear understanding of the Support settings, but for objects which have overhanging object (e.g. animal heads & tails) I'd suggest you try the Touching Buildplate option, as this produces fewer supports for you to remove than the Everywhere option.

getting the object off

So you've managed to get your printed object to stick nicely to the bed, and the printer finishes printing. How do you get your masterpiece off the bed?

Going from left to right in the picture above, the black handled scraper was supplied by Creality. The blade is too thick, so it tends to crash into the printer object rather than make any attempt to get under it and release it from the bed. This could be fixed by a bit of grinding.

The next scraper is all plastic and its proper use is for re-grouting tiles. However, if held at the right angle it makes a better job of releasing printed objects than the unmodified Creality scraper.

The rusty Harris wallpaper scraper works best because the blade is very thin and smooth. However, all three of these scrapers produce side-stress in the bed as you effectively push them against the print.

The final device attempts to overcome this problem by having two blades in opposition.The Effortless Print Removal Tool (https://www.thingiverse.com/thing:2056365) is a scary looking device made form a small hand clamp, 2 Stanley blades and a couple of 3D printed blade holders.

The author and his band of followers class anyone concerned about safety as "Snowflakes" and appear to wear their stupidity on their chest as some kind of macho badge of honour. My view is that these blades do not need to be razor sharp, so I have rounded off the sharp corners and blunted & de-burred the cutting edges (using a Dremel) which are now safe to handle, but still much thinner than my scrapers.

I had to scale up the original size of the blade holders by 104% so that they would slide onto my "Silverline 250108 Mini Clamps 100 mm". I also had to mirror the drawing, because you obviously need 2 holders, one left-handed, one right-handed.

In operation, you lay the tool on the bed with both blades touching the surface, then gently squeeze the handle. 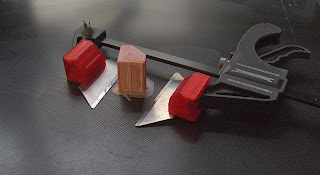 However, I seem to have a problem with mine in that the two blades are not properly aligned. 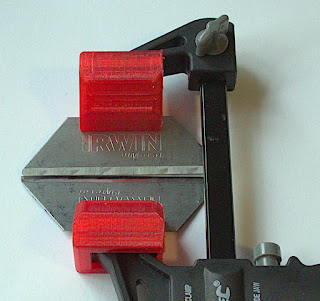 I may need to print the holders again or find some other way to sort out alignment.

A second problem is that it would appear that you need two parallel sides of the objects base to use this tool on. For example, if your object had a triangular base, one or both of the blades may twist in the holder and may even fall out. But as I've said, I haven't given up on this idea, I just need more time to work on it.

So I was very happy with the operation of my Creality printer and my ability to use it, up until a couple of days ago, when a reel of Xvico Rainbow filament arrived. Incidentally, although this reel has several colours, they are all many metres long. So you would have to make a huge model if you wanted it to include several colours.

Anyway, the problem was that I couldn't get it to stick to the bed. I started and aborted printing several times throughout the day, but it either didn't stick, or it didn't come out of the nozzle consistently, or it formed blobs.

In the early evening I started to print a Pentaceratops which stuck properly for maybe 90% of its base. Eventually (I guess) the nozzle clipped it and off it came. 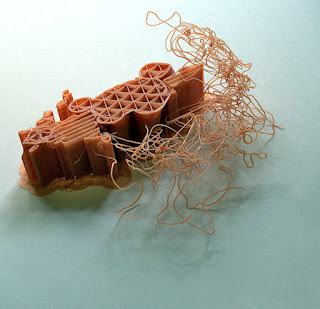 The following day I tried again with a test piece (the one in the Stanley bladed tool picture) and it was much, much better. I then tried the Pentaceratops once again, but had the same problem in exactly the same place, so stopped the print.

I now wonder if there is something wrong with this drawing! I then tried to build a Dimetrodon, and this was successful, but there are two or three places on the base that indicate something was not quite right.

However, the problems on the first day seemed to be due to the filament. I understand that moisture content can affect printing (although PLA filament is so hard that its difficult to image that this makes a difference) so was that the problem?

And did the filament start to stabilise after 20 hours of exposure to the air?

I've no idea. But it seems to be behaving its self now...

...and appears to get better the more (or longer) that I use this filament.

Click on the "3D Printing" tab at the top of the page for more 3D Printing posts.