Prostate Cancer: "F" is for.... Fiducial

When the oncologist started to mention "fiducials" I obviously wanted to know how big they were and where he was proposing to stick them.

My first concern was unfounded, as it turns out they are quite small.

However, the second concern proved to be more justified.

Before I could move on to the next stage of my treatment (radiotherapy), I needed two things; a rest, and some radiotherapy prep.

Its 5 weeks now since my final chemo session, but I'm still suffering a few side-effects. Every morning I get out of bed, look down at my feet and say "No way are they my feet!"

I've been suffering for the last two weeks with oedema, which is swollen feet and legs. And if I think they look alien in the mornings, that's nothing compared to the way they look by the end of the day, when they adopt that full-blown Michelin Man look. The NHS recommendation is not to spend too much time on your feet or sitting down, as both positions cause them to swell.

So where does that leave me? Don't sit down and don't stand up! I've tried hanging upside-down in the wardrobe, but that scares the bejesus out of my wife when she opens the door and discovers her very own Batman hanging between the shirts and that novelty donkey thingy that holds moth-balls.

What seems to help is a balance between sitting (no more than 45 mins), walking about, and taking a break by laying on the bed, preferably with feet raised on a couple of pillows. Trying to lay on the sofa just makes it worse for some reason unknown to man.

The cause of the oedema is almost certainly due to the Docetaxel that was fed into my veins during chemo. The mystery is why its become such a big problem after the treatment has effectively finished.

At the moment, the only other side-effects are yellow toe & finger nails, high resting pulse rate (although there are signs that this is coming down) and hot-flushes (which is actually a side-effect of Zoladex, so I'm going to be stuck with that for a year or two). However, I have a few weeks in which to try to shake off the after affects of chemo before I start 37 'Monday to Friday' sessions of radiotherapy.

I'm due to start IGRT radiotherapy in a few weeks. As its name suggests, IGRT (Image Guided Radiation Therapy) needs a few markers to ensure that the correct area is being targeted during each session of radiotherapy.

This is where the "fiducials" come in. The word "fiducial" just means a marker or scale included (usually) within an image to give a scale or reference to the object being inspected. Fitting the fiducials involves a rather uncomfortable procedure using a rectal ultrasonic probe and a kind of "straw" needle which is pushed into the prostate in order to insert small, rice shaped pieces of gold, measuring about 1mm in diameter by 5mm long. I can't remember whether she said they were 22 or 24 carat, but needless to say, I came away from this appointment being worth considerably more than when I went in.

Now this procedure sounds quite similar to the biopsy that I had a few months ago. But there was one important difference; I was knocked out with a general anesthetic for the biopsy.

The appointment for the fiducial installation started with a cosy chat (...don't they all) and a certain amount of mirth when my interviewer realised that it was my birthday. I asked for names and birthday dates of all members of the fiducial gang so that I could arrange something equally unusual for their special days!

Pleasantries over, I was then given 6 antibiotic tablets and invited to take the first one. The others were to be taken over the following couple of days. I was also given an injection in my lower back/buttock area. Now I estimate that I've had around 60 needles stuck into me over the last 6 months if I include injections, cannulas, blood tests and being prodded in my prostate with a sharp pointy stick! But this was one of the most painful jabs. It wasn't painful as the needle went in, it was the after-burn from whatever she injected into me. I don't even know what it was for! (...probably just for the hell of it).

But the main event was some time later when I was invited back into her office. I had to lay on a couch on my side facing the wall, while she wheeled up a piece of kit behind me and dimmed the lights. Just as I was waiting for a bit of romantic Barry White background music, she inserted the ultrasonic probe.

My vision suddenly became blurred as my eyes automatically watered. The probe was used both to capture a few unflattering photos and to deliver a local anesthetic. She tried to engage me in conversation (...just like a hairdresser might do) asking what kind of engineering I did for a living before retirement. For an instant I considered telling her I used to design rectal ultrasonic probes, but I found it very hard to concentrate enough to move my lips sufficiently to make accurate sounds beyond "...Oooh my god!"

I may have also shouted "...this is the most uncomfortable experience of my life!" or something along those lines, but at least I didn't feel the gold seed fiducials being inserted into my prostate via a fine straw-like needle, as I seemed to have more pressing matters on my mind.

All too soon the procedure came to an end, the lights came back up, and I was free to readjust my clothes and hobble out into the corridor, doing a pretty convincing impersonation of John Wayne's famous walk.

A few weeks later I had another appointment which I would describe as a 'personal calibration procedure'. In a pre-appointment letter I was told to drink 2.5L of water a day for two days, and practice using an enema, delivered via a special applicator. By "water" they meant any water based drink that did not include caffeine or alcohol. So I had to stop drinking "builders tea" & Greene King IPA and was only allowed Rooibos tea and Appletiser. 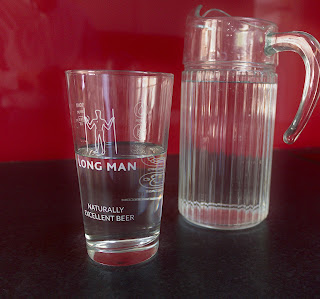 But mostly I concentrated in consuming 10 x 250ml glasses of water, carefully marking each one down using the 'Notes' app on my phone. I had no problem drinking this amount of water, it was just sometimes a bit tricky spacing it out evenly between the time I got up in the morning and 6pm in the evening.

What they didn't want me to do was down the whole 2.5L in one go (...so that I could have the rest of the day to relax). The idea was both to ensure adequate hydration and get me used to living with a full bladder. This is because an empty bladder falls over the prostate to some extent, while a full bladder swells and moves away from the prostate. When they give you radiotherapy, they want to minimise the amount of radiation reaching the bladder, and thereby [hopefully] minimise collateral damage.

On the day of the appointment I had to empty both my bowels and my bladder. At St. Luke's they confirmed my empty bladder by performing an [external] ultrasonic scan. This was followed by having to consume 450ml of water, which I reckon would have been exactly 1 pint prior to 15th February 1971, but had since shrunk by almost 5% due to us joining the Common Market.

The next step was for me to wait in the waiting room for 45mins until my bladder was full and I had turned red in the face. They then got me to lay on the CT scanner bed, and carefully adjusted my position, while a couple of medics played "cross the ball" using marker pens with my 3 gold fiducials as their hidden targets.

After another ultrasonic scan to be sure I had a full bladder, they did an initial CT scan before pumping chemicals into my blood stream, to ensure a "high contrast" image during the second scan. And finally a young tattoo artist was wheeled in to mark my 3 external calibration points in the required location. For an extra £35 she was willing to add "This Way Up!" or something equally comical.

I think the idea is that they will use a combination of tattoo marks and gold fiducials to align me during my subsequent radiotherapy sessions. This will hopefully ensure that the IGRT is focused nicely on the prostate with the minimum amount of radiation falling on other parts of my anatomy.

So that's it, all done, until radiotherapy starts in a few weeks.