...or at least that is the conclusion I have come to over the last few days.

Here are my notes to back this up.

I had a request for a spiral chess set, so downloaded the STL files from Thingiverse, sliced the drawings into G-code, and set my Creality CR-10-V3 printer running. But about half of my first 8 attempts ended in disaster.

At some point the problem prints would break-away from the bed and be chased around by the print head, creating a candy-floss effect, or the roving chess piece would get captured by the print head, and I'd end up with that half-sucked-boiled-sweet look. 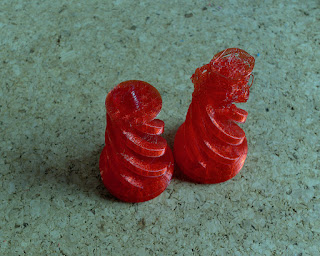 I went through the usual range of checks and adjustments; bed leveling, bed cleaning & tightening up jockey-wheels and miscellaneous screws, but I still wasn't happy that all was well.

If I sat by the printer and nursed it along, I was able to get a successful print every time. But what I was doing (almost subconsciously) was to pull through the filament when it looked a bit tight between the print head and the filament detector.

Initially I tried to relieve some of the friction in the filament path by moving the drum and filament detector positions in order to produce move favourable filament feed angles. I even removed 3 of the 4 filament detector fixing screws, allowing the detector to float to the best position while printing. 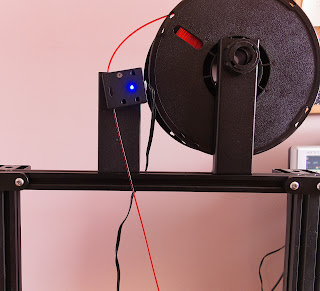 I then went one step further and simply bypassed the filament detector.

Now I was flying; king, bishop, knight, rook, pawn ...they all printed unattended.

It seems to me that the filament is exerting quite an upward "pull" on the print head due to the stiffness of the PLA filament, the energy needed to turn the reel, and the friction due to the filament detector. The filament is not straight, its curved due to the shape of the reel/drum and the diameter of the coil of remaining filament.

Therefore the filament detector, which contains a straight 40mm tube, is responsible for a great deal of friction.

In operation, the print head assembly is being pulled and distorted slightly as the filament tightens. But this "load" due to the filament is not constant for a number of reasons, and so it may gradually increase and then it may suddenly reduce.

Remember that when leveling the bed, we are trying to set a fairly uniform gap of about 80-100um. Such small amounts are easily upset by varying the load on the print head assembly.

I think that the chess pieces were being knocked of by the print nozzle; the printer would 'print-high' when the filament was applying a high "pull", and when the strain was released and the PLA had cooled, the nozzle clipped the piece and released it from the bed.

By suspending weight on the filament it should be possible to get an idea of the loading on the print head assembly. This is a very crude test, and remember that when the printer is printing off-centre, the load or strain will be higher.

With the filament fed through the detector, it was easily possible to support 500g. 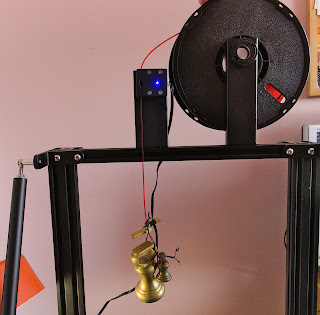 However, when I was pulling through filament by hand (as when printing chess pieces) I suspect that the friction was much higher than this from time to time.

I then repeated the test without the detector, and the filament could only support less than 80g. Once again, this figure will vary depending upon how much filament remains on the reel.

You could argue about the positioning of the reel/drum and the filament detector in my setup, or better still, repeat these measurements on your own printer.

You might even chose to fit a filament cleaner/lubricator to lower friction. But my view is that the filament detector design needs to be improved.

I've also tried letting the detector float on the filament. 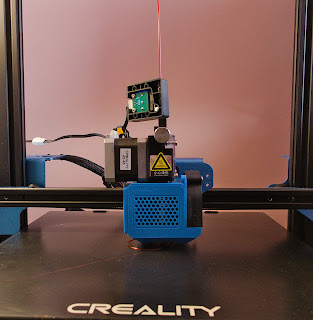 Although I can't measure the "pull" or loading with this arrangement, the printer happily printed 3 more chess pieces without knocking them off the bed mid-way thru.

I wonder how many users that are struggling with their prints not sticking to the bed, are actually experiencing this filament detector issue.

Since the filament is never going to be straight, the detector tube needs to be replaced with a funnel design, i.e. a wide opening at the top, tapering down to a smaller exit point. Maybe the mechanical micro-switch should be replaced by an LED/opto detector combination (the cost of LED/optos is almost certainly lower than the cost of a micro-switch).

Personally, I have no immediate use for the filament detector, so I'm just not using it. For me, the reduction in motor loading from over 500g to less than 80g is well worth the removal of this feature.

Earlier posts on the Creality CR-10:-