3D Printing: I'm back in the saddle!

It is almost 8 years since I've posted anything on 3D printing.

That's largely because its almost 8 years since I last touched a 3D printer.

Well now that I have my own printer...I'm back!

My family have been tremendously generous by clubbing together and buying me a Creality CR-10-V3 3D printer. I'd also forgotten everything I'd learnt from using the old MakerBot Replicator printer, but its slowly coming back to me.

The frame on this new machine is constructed from (what looks like) extruded aluminium, which has been black anodised. It is a single extruder type, with a glass bed and I currently have 4 reels of PLA filament.

Initially I found it frustrating that the PLA would not reliably stick to the bed. On the net people were talking about using all sorts of junk to get there designs to stick to the bed, including glue stick (Pritt-stick?), tape and hairspray. Although I haven't tried to use any of these 'remedies', the engineer inside me says "NOooooo! ...don't do it!". So I just cleaned the bed with methylated spirit and now all my objects seem to stick just fine.

The other frustration is trying to find information about this printer. It is supplied with an assembly guide and there is a good Creality video on YouTube showing someone putting it together. Incidentally most of the 3D printing videos on YouTube are called "unpacking the such-and-such printer". Not a lot of use.

Anyway, as I'm relatively new to this, some of my advice below may be incorrect, but this is my view until someone tells me otherwise. It should go without saying that I'm not your mum...the risk in following my advice is all yours! Take it or leave it.

After assembling the printer you need to remove the protective plastic from the bed and then clean the bed, load the filament, level the bed, and clean the bed again.

Here is a suggested procedure:-

Drip some meths onto the bed and wipe it with a clean cloth. You don't need to press hard, just a light wipe around with a moderate amount of meths.

Raise the print head height by resetting the z-axis to (say) z = 100 (this just gives you a working gap between head and bed).

While this is heating up, load the filament reel, with filament exiting from the top. The reel holder should go on the right side of the gantry with the filament detector fairly central, but close to the edge of the reel. This is so the filament will have a favourable path through the detector and down to the print head. 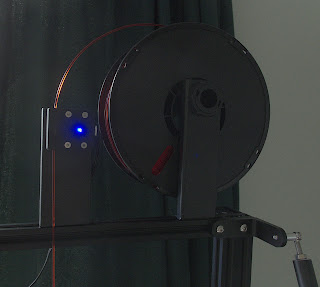 The cable from the filament detector should be on the opposite side of the gantry to the path of the filament. This is to avoid the filament being dragged across the cable.

Cut the end of the filament at an angle (say 45 degrees) and try to straighten the first few inches of filament to make it easier to pass through the detector and load to the head.

Once the hot-end is up to temperature, feed the filament through the filament detector, and push the end of the filament down into the print head while pulling the plastic top in the direction of the arrow. You may need to adjust the spring tension via the knurled knob if this plastic slider is too tight. 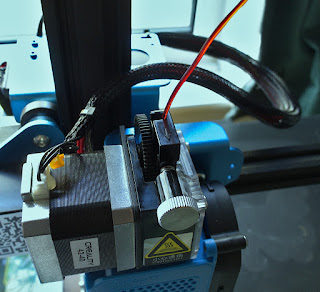 Once the filament is in as far as it will go, rotate the exposed edge of the cog in the direction of the arrow to pull the filament through the extruder until you see PLA extruded from the nozzle.

When the bed and nozzle have reached their target temperatures (185'C & 45'C) place a sheet of A4 printer paper on the bed.

Select Prepare > Disable steppers. This allows you to move the bed and the print head by hand.

Push the head over the paper and move to each of the 4 corners in turn while adjusting the respective height adjuster; CW raises the bed closer to the head, CCW lowers the bed away from the head. When correctly set, you should feel slight resistance when pulling the paper underneath the nozzle (...you will develop a feel for this).

After the last corner adjustment, recheck all corners.

Important: always recheck all corners again after making [what you think is] the last adjustment, to be sure bed is correctly set.

Now clean the central area of the bed (where you expect your object to be printed) with meths and wipe with a cloth. Do NOT touch the bed again (...if you do, then clean it again!).

Select Print from TF and select a file to print (probably start with the smallest sample gcode file). Once the bed and nozzle have reached their target temperatures (60'C & 200'C) the printer should start.

Watch the printer carefully and be prepared to stop the printer if something bad happens.

While the print is in progress, start to think how you are going to get it off the bed. Look at the scraper tool provided. Mine had a burred edge, so I used a grinding stone to make it smooth.

I'm currently experimenting with ideas to extract objects from the bed, and the best I've found so far is an old wall-paper scraper which must be 45 years old.

The edge has worn nice and smooth over time and its very thin, whereas the end of the Creality scraper is probably too thick, so will just stab at your print, rather than get under it and release it. So it will probably need a bit of work with the grind stone if you plan to use it.

When printing is complete, select Disable steppers, move the bed into a convenient position, and use a scraper to remove your object, preferable while the bed is still hot.

To change the filament, once again pre-heat the hot end, turn the cog forwards to extrude some PLA to make sure the nozzle is not blocked, then rotate the cog the other way, while gently pulling the filament.

In the next post, I'll probably have something to say about the slicing software Cura which [of course] I'm using on Linux.