A few more days of feeding and the chicks continue to grow.


They are now about two thirds of the way through their time in the nest, with a predicted departure day of next Tuesday (26th May).


And we still seem to have 8 healthy looking chicks, and 2 very capable parents.

It probably goes without saying that the chicks look more bird-like every day. Feathers are growing, eyes are now open, and once or twice we have seen some wing testing.

The parents also continue to do their job and provide what food they can for their offsping. We have also noticed a slight increase in the number of caterpillars being brought into the nest.


Once again, I could see no apparent reason for the gradual decline in feeding rates from Tuesday 12th to Friday 15th.  But it does seem to have recovered and has now leveled off. The weather has been variable, with sunshine and showers on many days, and temperatures which I believe are below seasonal average.


When an adult leaves the nest, after bringing in food for the chicks, the air inside gets sturred up, and small particles float around on the air currents and light up when they catch the sun shining through the entrance hole.

These small dust particles sometimes appear as streaks of light (like shooting stars) due to the relatively low shutter speed.


In this case, the exif image data attached to the RaspiCam image includes:-


...so the shutter speed is only 1/18th second which explains the streaks, and also why the chicks are generally blurred (they keep moving!).

The aperture value must be a preset based upon the standard RaspiCam lens. But since I'm using an M12 threaded board lens, this value is almost certainly wrong.


Apart from their gaping mouths, the rest of the chicks body seems to blend in very well with the colour and texture of the nest. 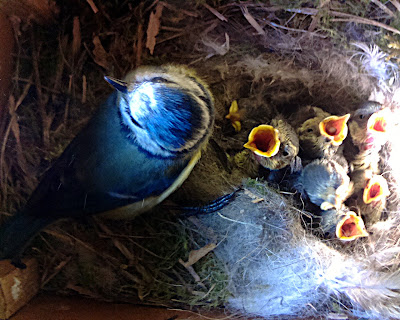 
Last Sunday we had a few friends over for a coffee morning, so I dragged a 32" tv through the house to the conservatory, and used it to display the video stream from the bird box. I also attached my portable PiCam to the pergola, so we were able to view the outside of the box on a second tv.

While admiring the picture quality, I noticed something unusual. A blue tit entered the box with 6 or 7 narrow strips of paper-like bark (the kind that is easily peeled from the stems of our vitis) which she dropped at the front of the nest. She then just looked at the chicks for a moment or two before leaving the nest.

I thought the female had lost the plot. Why was she bringing in more nest material, when she should be bringing in food?

Are there three of us in this marriage?


A few minutes later the two parents returned, both with food for the chicks. The male popped an insect into the nearest open mouth, and then left the box, taking up position just outside.

Wait a minute! One adult blue tit in the nest, and 2 showing on the second screen, outside the box.

While I was still rubbing my eyes, the second female (I think) went back into the nest. Now everyone (i.e. me and the 3 adult blue tits) were rubbing their eyes. What's going on?

After a few seconds of embarasing silence (you could have heard a pin drop!) the second female left the nest followed closely by the 1st. Then the two legitimate parents appeared to chase the intruder away!

If I hadn't had the two screens side-by-side I would not have realised that there were three blue tits in this mini-drama, I would have only seen two. Which just goes to show how much you can miss when you are only looking inside the box.

I guess for 2016 I need the level of manpower that Springwatch have, with a team of story developers watching all video feeds 24 hours a day. The alternative is to video everything, and then spend the rest of the year reviewing it!
Posted by SteveDee at 12:58