It is now just over a week since the blue tit chicks hatched out and started demanding food.


They seem to be growing fast and are starting to look like prototype birds.


And by this weekend they will be half way through this stage, with only around 10 days left before leaving the nest and having to face the world outside.

The parents continue to do a great job collecting live meals including spiders, small flies and the occasional green caterpillar. But it looks like there is a local shortage of caterpillars this year, so I hope they can find suitable alternatives.

They also grab a beak full of fat-ball, and share that out among the chicks, but I can't believe that is a good as live food.

A couple of days ago I noticed a chick had wondered out of the nest cup and reached the front wall of the box. 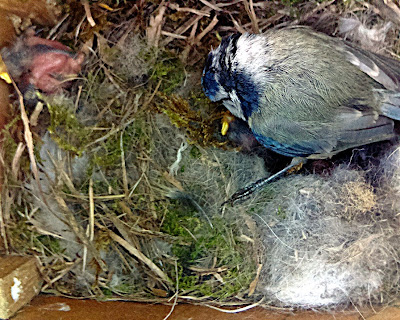 Mum came in and watched it for a few moments, pecking at its legs once or twice, apparently trying to steer it back to the nest cup. But after an hour or so it managed to find its own way back.

At this stage their eyes have not yet opened. So I guess the chicks are either completely blind or maybe they can detect a little light through the thin skin covering their eyes.

Time for a graph


Visiting/feeding rates seem to vary from day to day, but I can't see a weather pattern.


While searching the shed for a suitable flower pot last weekend, we were surprised to discover a robin nest inside a small blue plastic crate. I think there were 4 or 5 eggs, but I didn't want to distress the adults by sticking around.

The parents seem to have found a hole in the side of the roof, but are happy to take a short cut, if we leave the shed door open while gardening.

Just 3 metres from our back door we have an archway, which was the home of this years new bird box. I've taken the box down now as its too late for any takers. However, a pair of blackbirds have built a nest, nicely concealed by a clematis and a few other climbers.


I was hoping that the vitis (...it looks like a grape vine) on the pergola would have sprouted leaves over the nest box by now, and offered a bit of mid-day shade over the 50mm window.

As I don't have a temperature sensor in this box, on Wednesday I did add a layer of bubble-wrap over the outside of the window as an additional precaution against over-heating. For 2016, both boxes will be positioned with their windows pointing north...ish. And I may go back to fitting a temperature sensor.

This years "occupied box" (which was designed and built in 2013/4) has continued to work very well. Since I modified the software to close my Gambas app before shutting down, I haven't had a single instance of lost program settings.

I run the 12Ahr battery for up to 60 hours before swapping it out, which seems to give a reasonable safety margin against premature shut-down. The system is switched on when the female leaves the nest around 5:15am and runs continuously now (because of all the activity) until about 8pm. That is around 15hrs per day, so the battery lasts for about 4 days.

The only issue is remembering to reset the run-time counter. As I often change the battery over in the evening (after the system has shut down) I can't restart the system manually to reset the counter unless I stick something in the entrance hole to trigger it. I don't want to scare the female by doing this!
Posted by SteveDee at 17:56